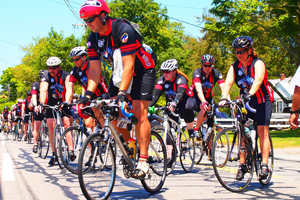 During EMS Week, dozens of people from EMS systems all over the U.S. gathered to participate in the 2012 National EMS Memorial Bike Rides (NEMSMBR), with routes starting in both Boston, Mass., and Paintsville, Ky. Both routes ended in Alexandria, Va. The ride is held annually to honor EMS providers who have died in the line of duty and to advocate for safety in EMS and the wellness of EMS providers.

This was my fifth year on the ride and my first as its public information officer (PIO). As with past years, the ride brings new faces and old friends, laughter and tears, and unforgettable experiences. On the 2012 ride, we honored more than 40 EMS providers who had paid the ultimate sacrifice for EMS.

Over the seven days, 70—100 riders participated per day on the East Coast route, seven riders on the Kentucky route, with another 20—25 ride support staff, affectionately known as “Wingmen.” Twenty-two states were represented among the participants.

For some, it was a return to the ride, but for others, it was their first ride. For both, many moments and emotions were experienced along the way.

“Everyone has a different reason for doing this ride,” says Dave Milsted, medical services officer with the Cherry Hill (N.J.) Fire Department, who was on his sixth ride. “I have been lucky enough not to [have] personally known a line of duty death. I do it because I believe in the cause.”

Although the Ride has solemn moments, there’s also a spirit of excitement among the participants.

“This feeling is shared by many, and bonds are woven so tightly,” says Jennifer Lyon of Milford, Conn., a member of the NEMSMBR Board of Directors. “Someone who knows, who has been on the ride and understands that it’s not just a bike ride, it’s about becoming part of a family of people who understand your struggles and share them so you don’t have to carry them by yourself.”

For first time participants, the feeling of becoming a part of the “Muddy Angels” is special. “This was my first Muddy Angels ride, and to say the least, amazing, awesome and overwhelming at times with emotions,” adds Dawn Scott, an emergency room nurse from Jacksonville, N.C. “I just can’t put it all into words how the week affected me, but [it’s] something I will always cherish and hope to be a part of next year.”

“The compassion, love, and determination is overwhelming,” says first-time ride support staffer Shirley Davey of Leola, Pa., who isn’t an EMS provider but participated with her EMT husband, Steve.

“I can say that I am grateful to have these people there when the call comes and help is needed. How unfortunate that they are not appreciated for the skills they possess and administer without thought to themselves.”

Even for veteran riders, there are always new experiences. “Doing the Kentucky route was like getting to experience the NEMSMBR for the first time again,” says Beth Kirkland Davis, a flight paramedic from Reno, Nev., also a NEMSMBR Board Member. “Working on the West Coast, I would never have met the EMS providers at the local agencies in rural Kentucky, West Virginia and Virginia. These providers opened their doors to feed us and made us a part of their family even in the midst of their own struggles.”

The hospitality and generosity shown to the participants is nothing short of spectacular. This year, a bike shop even donated a bike to a rider who had serious mechanical issues with their bike just prior to the ride, and was nearly unable to ride.

“Fellow Muddy Angels went to Berkshire Bike and Board (Great Barrington, Mass.) to get ready for the ride and spoke of my problem,” comments Isaac Greenlaw of Bangor, Maine. “The bike shop donated a brand new bike for me to use for the week with only one condition: Ride as much as possible.”

The 2012 ride was also especially meaningful for many, as the group rode to honor Lori Foster-Mayfield, a paramedic from Reno, Nev., who died unexpectedly in January. “Due to our previous year’s accounts of the ride, as well as the outpouring of support for Lori and her passion for her profession, 14 people from the Reno area joined us on the ride,” says Trish Hamilton, a flight nurse and Lori’s best friend. “For me, [the decision to ride] was the best decision I could have made. My Muddy Angel family is like no other friendship or family out there. They are some of the best people I have ever known.”

The common themes among everyone involved are family and camaraderie. People who don’t know each other on a Friday to give a helping hand to change a tire or help up a long hill and then hug as if they were lifelong friends at the end of the ride–well, that’s just a feeling that can’t really be put into words.

The NEMSMBR is something everyone must experience.

It’s a grueling journey, both mentally and physically. However, the spirit of the ride, those who are being honored and the feeling of family among the Muddy Angels heals muscles, hearts and souls.