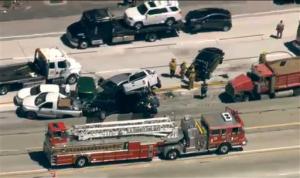 Television news footage showed more than a half-dozen cars, pickup trucks and SUVs crumpled together and piled on top of each other in a cluster of wreckage on the southbound side of state Route 14 in Agua Dulce. The route is known locally as the Antelope Valley Freeway, where cars heading from the high-desert bedroom communities often speed on their way to the Los Angeles basin.

The crash was reported at 9:45 a.m., and Los Angeles County fire Capt. Mark Savage said “there are 19 vehicles involved, at least one or two big-rigs.”

All the southbound lanes and two northbound lanes were reopened at 2:08 p.m., according to the California Highway Patrol.

There was no fire and no hazardous material spills, Savage said.

Firefighters freed a person trapped in the wreckage, and a fleet of ambulances ferried the injured to hospitals, Savage said. Fire Capt. Doug LaCount told KABC-TV that most of the injuries were minor.

The cause of the accident was under investigation.

The highway through the San Gabriel Mountains rises to a summit elevation topping 3,200 feet.