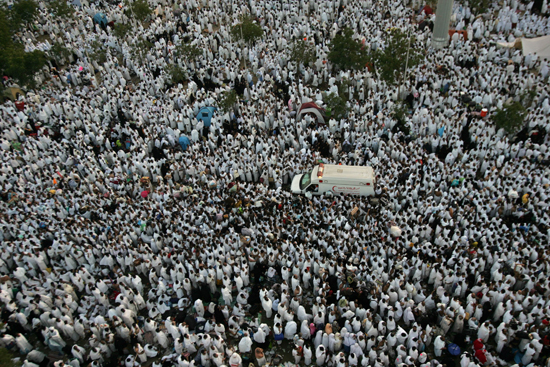 The Hajj is the largest mass gathering in the world today. In 2012, more than 3.5 million Muslim men and women of every nationality participated in the event. The Hajj, which means “to set out for a place,” is a pilgrimage that every Muslim is obligated to complete, if physically/financially possible, during his or her lifetime. It involves prayers and rituals that span an area of 469 square kilometers and involves five separate locations within the greater Makkah region of Saudi Arabia. The pilgrims spend three to five full days of continuous movement before completing the final phase of the journey.

While the sheer number of attendees distinguishes the Hajj from other mass gatherings, it’s the movement of the pilgrims from one location to another that requires major logistical planning. Certain time requirements make it imperative that these mass movements of people take place at specific points in the Hajj pilgrimage, placing even greater demands on planning and preparedness.

Another consideration is that a Hijri calendar month is 30 days long. This means the dates and seasons for the Hajj are always changing. Depending on the season, the weather can be extremely hot and dry or cold and wet. With multitudes of people from different nations speaking different languages and a generally older population, multiple agencies must work diligently to ensure a safe and incident-free event. 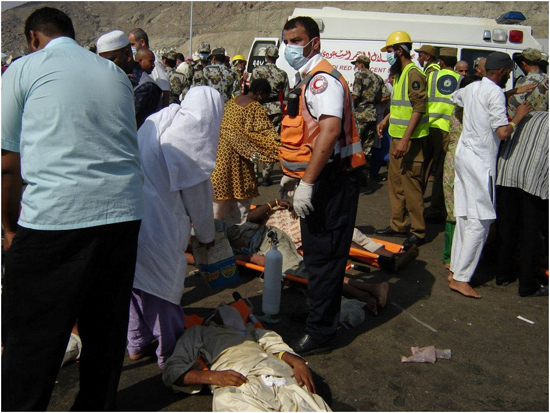 The Saudi Arabian government sponsors the Ministry of Hajj Affairs, which is responsible for the implementation and execution of Hajj activities. Every level of government is involved and cross-ministry cooperation is imperative.

Emergency responders in the country are divided among various agencies. The Ministry of Interior (MOI) is responsible for the overall operation of the Hajj. Civil Defense, which is responsible for the fire and rescue services, is directly under the umbrella of the MOI. The National Police Department provides security and supportive services for EMS providers during emergencies. The Saudi Red Crescent Authority (SRCA) is the sole provider for EMS within the Kingdom under the direction of its president, Prince Faisal bin Abdullah bin Abdul-Aziz Al Saud. The Ministry of Health, the National Guard and other agencies, including the military, provide additional emergency and transportation services. Another source of support comes from the surrounding countries, which contribute equipment and medical teams to help with the delivery of care. Each of these agencies has a direct and supportive role in providing EMS services to the attendees.

Planning for Hajj never ends. Following the completion of a Hajj, debriefing meetings are immediately held to evaluate how the event was handled. Statistical data are analyzed and priorities are refocused to address developing issues of concern. All of the involved agencies are required to submit detailed reports of their activities and identify issues of concern. Suggestions and action plans for improvements are then evaluated, prioritized and implemented. Although planning for such a large event can be overwhelming, cooperative action between Saudi agencies typically results in smooth and uneventful operations. Problems can compound quickly when 3—4 million people engage in such a physically demanding activity. 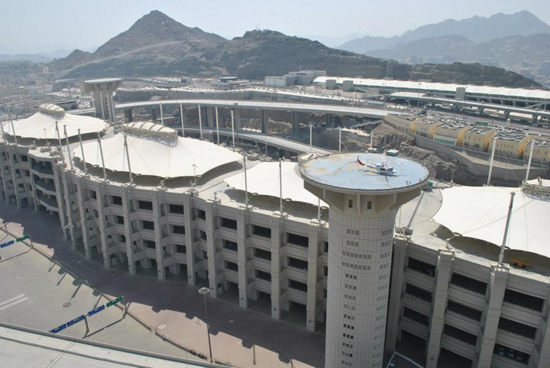 The Jamarat Bridge, rebuilt in 2009, has helicopter landing pads accessed by elevators that take the whole ambulance from the ground floor.

A central command and control center, under the direction of the Ministry of Interior, is staffed by representatives of all agencies participating in the Hajj. Calls for assistance and requests for services are routed to individual subcenters that then coordinate the response and help needed. A special three-digit telephone number is activated during the Hajj season so that anyone requiring assistance can access immediate help. The entire area of the Hajj, including the cities and regions of Makkah, Mina, Musdelapha and Arafat, are divided into circular sectors for management purposes. The Makkah City (commonly known in the U.S. as Mecca) area is subdivided into two circular sectors that allow for tighter management of extremely concentrated areas in and around the Grand Mosque. The Grand Mosque itself can hold at maximum 1.2 million pilgrims at one time for prayers. 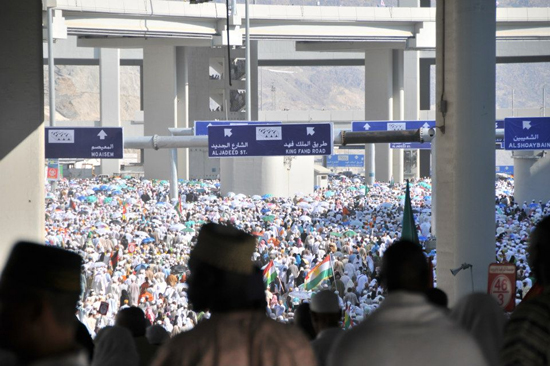 With approximately 3.5 million people gathered in such a small area, potential crowd surges are of particular concern. The physical forces that are generated by a moving mass of people in one direction can cause serious or fatal injuries from the generated momentum. Retrograde movement during the Hajj is strictly managed since the energy created by the mass of people moving in a forward direction can’t be controlled. Special teams are in place along the route to help prevent injuries should a pilgrim fall while moving in the crowd. Another major concern for the route the pilgrim travels is the presence of “pinch points.” The path has been specifically designed to avoid these “pinch points” and allows for the free movement of the crowd throughout the event.

One example of engineering efforts to prevent pinch points and ease crowd flow was the redesign of the Jamarat Bridge, completed in 2009. Each pilgrim is required to pass through this specific area and perform a certain ritual activity. In the past, the barrier surrounding the area was circular in design and resulted in uncontrollable movement in and out of the area. A significant number of crush-related injuries was directly linked to this foot traffic-flow pattern. Using satellite technology, an infrared survey was conducted to reveal highly concentrated areas. The bridge and wall were then redesigned to be multi-level and elliptical in shape, thus eliminating the incidence of crush-related injuries in that area. 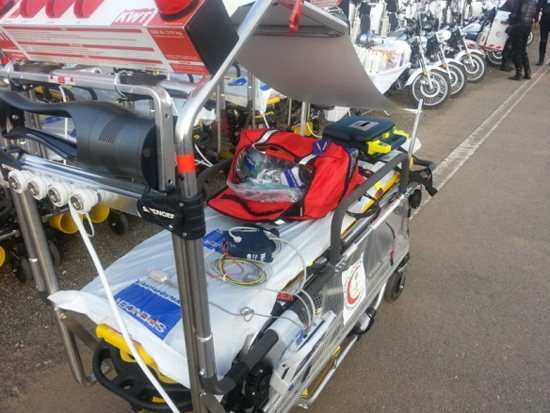 Specially designed stretchers deliver cooled air to the patient and are compact and easily moved.

Two weeks prior to the Hajj, the SRCA deploys at minimum 300 ambulance units, 20 ALS response vehicles, 25 motorcycle units and 100 mobile teams of doctors. Coverage continues throughout the Hajj until the pilgrims leave the country. During the 2012 Hajj season, SRCA deployed 1,750 EMS personnel and 600 volunteers to various treatment locations throughout the region. They were assigned to 26 stations and 47 posts strategically located at key event areas.

During the 14 days of build-up for the Hajj, there were 27,046 calls to the command center requesting assistance, which resulted in 7,042 responses. In the 14 days during and following the Hajj, the Command Center answered 57,420 calls for assistance that resulted in 20,210 responses. There were 18,230 patients serviced from those dispatches. Thirty-seven additional temporary stations were manned on the highways that lead to Makkah to deal with 3,340 motor vehicle-related injuries. A total of 459 transports occurred over the same 14-day period.

In addition to the increased load of the Hajj, regional stations are still responsible for the daily services provided to the area. A normal month of calls in the Makkah region numbers between 8,000 and 9,000. During the month of Hajj, season calls increased to 13,835 that were answered by 12 permanent stations. Providing care to patients under these conditions requires a number of innovative approaches to reach the patient and move them, if needed, to a continuing clinical care facility.

To address access and transportation issues, the SRCA employs many different systems to transport and manage emergency patients. Mobile Command Center buses are strategically deployed throughout the area to coordinate operations. Specially designed stretchers that provide cooled air to the patient are delivered by ground teams, which allows for the movement of the patient to a nearby treatment area. Motorcycle responders are able to rapidly access patients for initial assessments in massively crowded areas.

Teams of paramedics, physicians and EMTs work seamlessly together to meet patient needs. The SRCA utilizes eight medical helicopters to move critically ill or injured patients from specially designed landing pads strategically located along the route. The landing pads on the Jamarat Bridge house elevators that take the whole ambulance from the ground floor up to the landing area. Those pilgrims in need of care or treatment can find specially designed medical clinics staffed by SRCA physicians and prehospital providers.

A unique challenge faced by EMS providers is the hundreds of languages spoken by the pilgrims. Custom-designed picture books are used to help pilgrims communicate condition, location and severity of an illness or injury. Another difficult challenge is to actually provide the proper level of care required for a patient’s medical or traumatic condition.

A large number of pilgrims who participate in the Hajj are older and have preexisting medical conditions. This complicates the religious need of completing the once-in-a-lifetime pilgrimage during the designated time frame. Patients often refuse care for serious medical conditions, such as an active myocardial infarction, and continue on their pilgrimage. These types of situations place clinicians in the complicated position where they must watch as patients refuse critically important treatment.

Keeping the clinics, ambulances and providers equipped and stocked with supplies is a challenge that the SRCA has had to address. During the pilgrimage the immediate roads around the Hajj are shut down by the government and the outer roads remain congested with traffic and pedestrians. The SRCA analyzes the previous year’s consumption of supplies and stock items to project the quantities that will likely be needed for the next year. This analysis allows the SRCA to pre-deliver supplies and stock items to strategic points within the area to support the medical missions during the Hajj. The supply system consists of a central warehouse and smaller satellite facilities. Before the event begins, the logistics team stocks the vehicles and distributes supplies to all of the stations and posts.

During the previous Hajj, the logistics team handled 6,660 bags of normal saline (NS), 3,710 bags of D5W and 10,150 bags of lactated ringers solution. Oxygen supplies and tanks consumed were 418 M and 682 D cylinders along with 18,200 adult, 7,950 child and 7,000 high-efficiency particulate air (HEPA) masks. All EMS provided during the Hajj are free of charge to the patient and financially supported by the Custodian of the Two Holy Mosques, King Abdullah bin Abdul-Aziz Al Saud. 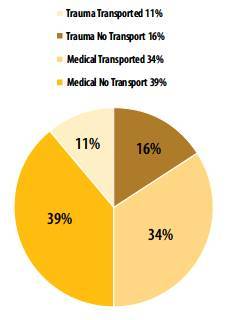 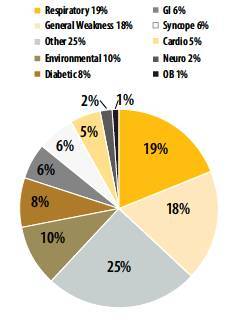 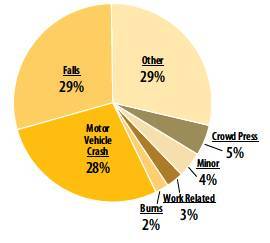 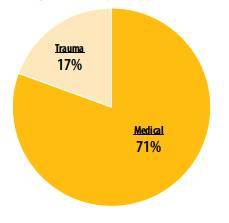 The Hajj is a “mega-gathering” event attended yearly by millions of Muslims from across the world. Planning, communications and logistical support are the foundations of its success. EMS systems and major event planners throughout the world can learn from studying the special challenges involved with managing such a large multilingual, multicultural crowd. Current studies predict that by 2020 there will be more than 10 million pilgrims in attendance for the event.

New construction and supportive infrastructures are already underway to meet the ever-growing needs of the pilgrims. With the improvement of systems and design, there is already a steady decrease in the number of accidents and requests for help. Continuous monitoring of emerging health situations ensures that a simple case of the flu does not become a worldwide epidemic. There will always be a need for emergent care during the Hajj and the Saudi Red Crescent Authority and supportive agencies will be ready to serve those who come to participate. JEMS 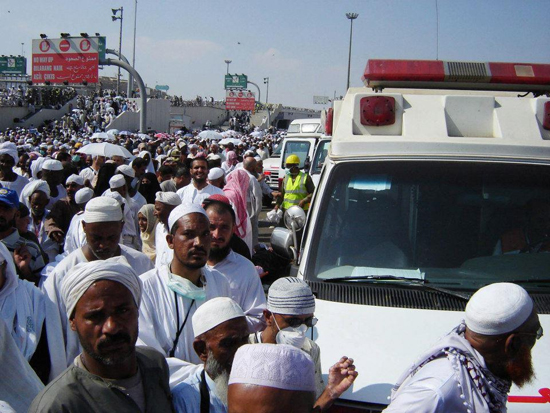 Access to patients is just one of many challenges faced by EMS providers during the mass pilgrimage.