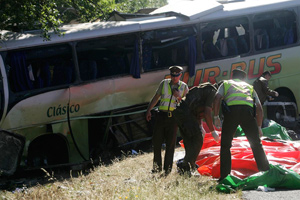 This month, we’re going to start review a mass casualty incident (MCI) that occurred in 2008 and was the catalyst for a major project that will significantly affect how we manage MCIs in the future.

Scene
On Jan. 6, 2008, a tour bus was returning from Telluride, Colo., to Phoenix. The bus had to divert from its normal route due to weather conditions. The bus driver, who was unfamiliar with the road, failed to negotiate a curve and went down a 41-foot embankment. The bus rolled once, separating the top off of the bus. This incident turned out to be like the “perfect storm” of MCIs, incorporating almost every problem you could possibly imagine into one event.

The crash occurred in San Juan County in southeast Utah. The county covers 7,725 square miles but has a population of only 14,413. When the bus crashed around 7:30 p.m., it was already dark. The first call about the crash didn’t come in until 8:30 p.m. The caller reported a bus rollover but didn’t know the location. Phone service was broken, so it was amazing the caller even got any cell service in that area. The next call wasn’t until some time later, when a woman in a passing car went to the town of Mexican Hat and called 9-1-1 on a landline. However, because she reported it as a truck crash, the initial response wasn’t heavy.

The crash scene was messy and dangerous. The bus had gone through barbed wire, and debris from the bus was everywhere. Some passengers were pinned under the bus or its roof, and some were as far as 100 yards away. It was 26° outside.

Some things, however, did work in favor of the EMS providers. Because the passengers were returning from a ski trip, many had warmers in their luggage, and these were used to help their fellow passengers. One of the county ambulances, staffed by two experienced EMS providers, happened to be closer to the area because they were returning from a transport. A passerby had a generator, floodlight and heavy jack in his car. Employees from a nearby motel brought blankets to the scene. Early on in the incident another bus with 50 passengers happened upon the scene. These passengers assisted with monitoring the injured, and the bus was used to hold some injured patients.

There were a total of 52 patients. Fifty of the 52 were ejected from the bus. There were nine fatalities (seven dead on the scene and two died later). One of the seven fatalities was a 16-year-old who was trapped under the bus and was considered expectant. There were 35 serious injuries, which included the two who died later. About half of those patients were triaged as red; the other half was triaged as yellow. In addition, 10 patients were triaged as green.

The majority of the injured had spinal injuries. Interestingly, five people who were considered “walking wounded” were moved to the other bus. It was there that it was discovered that one of these patients had a hip fracture. This highlights why patients should be reevaluated and re-triaged throughout an MCI.

The overall scene response eventually included 43 EMS providers, two highway patrol officers, three highway patrol deputies, 25 rescue personnel and 10 county employees. Fifteen ambulances (including one from 250 miles away) responded to the scene, and two additional ambulances were staged at one of the hospitals. Seats were removed from three county vans to be used as ambulances, which highlights the need to look for alternative means of transportation for patients when area resources are limited.

In addition to the limited resources due to the rural nature of the location, during this MCI, helicopters couldn’t be used due to weather conditions. Patients were transported to four hospitals and two clinics. Two hospitals in the region were on diversion and refused to accept patients. EMS administration has since met with those two hospitals and worked things out so this doesn’t occur during a future MCI. This also demonstrates why hospitals need to be informed of EMS providers’ expectations for MCI operations ahead of time.

Additional Challenges
EMS providers faced many challenges on this scene. One difficulty was that the closest hospital was 80 miles away. Also, there communication from the scene, hospitals and ambulances was limited. The county had an MCI trailer, but it was capable of treating only 20 patients and wasn’t well organized.

EMS providers encountered problems with the triage and tracking of patients, particularly with members from the same families on the bus. A command system was put in place but it didn’t include a designated triage unit leader because they were short on personnel. One person did most of the triage and acted as medical group supervisor.

In the beginning, providers put people in ambulances if they’d been triaged as red, but they eventually separated them into a treatment area for better management and tracking. Despite the challenges, however, EMS providers did a great job of managing such a large incident with so many obstacles.

Lessons Learned
Let’s look at how this incident may affect our future MCI operations. Following the investigation of the crash, the National Transportation Safety Board (NTSB) issued recommendations for the Federal Inter-Agency Committee on EMS and the Federal Highway Administration to explore with the National Association of State EMS Officials (NASEMSO) about a method to assess EMS readiness and response to a significant crash involving a motor coach.

This project specifically addresses a recommendation related to an evaluation of emergency care response to MCIs and the development and dissemination of guidelines to the states. The result is the NASEMSO Highway Incident and Transportation Systems committee project: Highway Mass Casualty Readiness & Response: Creating New EMS Tools for Highway Risk Assessment.

The project has two key components. The first is the development of an Event Response Readiness Assessment (ERRA) tool, which is an evaluation instrument that assesses a system’s degree of optimum preparedness for responding to MCIs. It’s to be used by local, regional or state EMS agencies for self-evaluating readiness to respond. The assessment results can influence EMS and highway safety programmatic decisions. It can be used as a “scorecard,” establishing benchmarks and evaluating progress made. These findings should be essential to state departments of transportation (DOTs) as safety assessments are performed and strategic highway safety plan projects are selected.

The second component involves an emergency care inventory that displays resource availability and system capability by segment of U.S. interstates and highways. This is accomplished by developing a working matrix of data elements, known as Model Inventory of Emergency Care Elements (MIECE). Several elements will be inventoried, including the number of ground and air ambulances, MCI support vehicles, EMS providers, rescue and extrication vehicles, and equipment that can respond in 30, 60 and 90 minutes after notification of an MCI.

The inventory also tracks communications and hospital capabilities. It looks at system capabilities, such as whether an incident command system is used, whether MCI response plans have been written and whether uniform triage systems are used. Having an inventory of these elements can not only help if an MCI occurs, but can also help regions, states and even the federal government decide where money can be spent to best enhance response capabilities.

Although the project is primarily aimed at enhancing highway safety, it’s obvious that the ERRA and MIECE information will help EMS providers regardless of the MCI that occurs.

To learn more about the details of the project, click here.