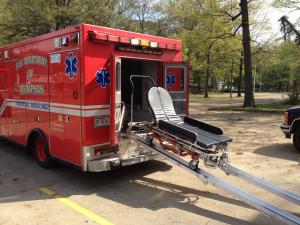 Lighten the Load
Bariatric patients in Memphis, Tenn., may now be transported to local hospitals with a bit more comfort thanks to a new bariatric ambulance put into service by the Memphis Fire Department. The unit was created for $5,000 by retrofitting a fleet ambulance in with ramps, a winch and a large cot, according to Deputy Fire Chief Gary Ludwig.

Ludwig says the ambulance has served two important purposes. “It’s done one to prevent injuries to firefighters and their backs,” says Ludwig, “and two to provide some dignity to the patients.” There was clearly a need for this type of vehicle, Ludwig says. The Memphis Fire Department had been transporting an average of at least one bariatric patient, weighing 600—800 lbs. a month during recent months.

In the past, like most EMS operations without specialty bariatric units, members of the Memphis Fire Department would have had to improvise when facing heavy patients.

“We’ve moved patients any way possible,” Ludwig says. The heavier patients typically wouldn’t fit on standard ambulance cots, leaving some to be transported on the floor of the vehicles. The new unit can accommodate patients up to 1,600 lbs. Because of the early high-volume of use for the unit and the size of the area covered by the department, Ludwig says there’s already talk of adding a second bariatric unit.

“We’re going to reevaluate after about four or five months,” he says. “The first week in service we had three [calls]. The first week we also had an 800-lb. patient.”

Infection Watch
A new study of Chicago-area ambulances found that only 6% showed signs of a dangerous type of bacteria. That’s good news for those providers working in those ambulances who may fear being surrounded by infectious diseases in their workplaces.

Katherine West, RN, BSN, MSEd, a principal at Infection Control/Emerging Concepts, Inc., and JEMS Editorial Board member, wasn’t shocked by the results, although she says there needs to be more training on how to prevent the spread of diseases.

“If people are cleaning their vehicles the way they are supposed to, the findings would be favorable,” West says.

Researchers from Lewis University in Romeoville, Ill., sampled 26 areas inside 71 ambulances from 34 different Chicago-area municipalities, according to the report that was published in the April issue of the American Journal of Infection Control. They found that approximately 6% of those sites sampled tested positive for Staphyloccocus aureus, a bacterium that can cause serious infections.

Also, they found that five of the 71 ambulances tested positive for Methicillin-resistant Staphylococcus aureus in at least
one location.

“These results indicate that first responders are doing a good job of protecting their patients,” James Rago, PhD, the lead author of the study, said in a statement.

Although the findings of the survey are good, West believes more needs to be done to educate EMS providers on the importance of cleaning ambulances after every call.

“There’s a disconnect that exists in EMS today,” she says. “They say, “˜I’m all scared I’m going to get these diseases.’ But do I do what I’m supposed to?'”

We applaud these agencies for having a relatively low rate of infectious diseases detected, but we also urge EMS as a whole to focus more on this issue to eliminate any unsanitary conditions for both patients and providers.

Training Techniques
The Gilbert (Ariz.) Police Department recently updated its training and added specialized kits to patrol vehicles. They adopted the “First Five Minutes” program, which updates officers on current best practices in tactical EMS and focuses on such topics as scene security, intelligence gathering, and the dissemination of information to responding medical personnel. Every supervisor is issued a large kit to be carried in their vehicle, which includes bandages with a clotting agent, trauma and occlusive dressings.

However, the Gilbert Police Department went one step further by placing key items, such as tourniquets and hemostatic dressings in special holders that each officer carries with them while on duty on their belt or external vest carrier, so they are immediately available if needed by an officer for self treatment or the treatment of others. We commend Gilbert PD for taking such an innovative approach to its officer care capabilities. For more, see “Beyond the Tape,” pp. 38—44. This article originally appeared in May 2012 JEMS as “Last Word: The Ups & Downs of EMS.”