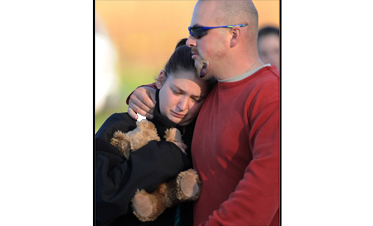 CHICAGO — With 35 deaths so far, 2008 is the worst on record in the U.S. for accidents involving emergency medical helicopters — aircraft that experts describe as the most dangerous in the sky.

While major airline crashes have become extremely rare in the last decade in the U.S., the fatal accident rate for medical helicopters is 6,000 times that of commercial airliners, authorities said.

The helicopters help save thousands of lives each year by rushing severely injured or ill patients to high-level medical treatment. But the rapid growth in such flights, combined with an absence of strong safety oversight, has led to more fatal accidents, according to aviation authorities.

The latest accident happened Wednesday night, when an emergency medical helicopter crashed in Aurora and killed a 13-month-old girl, the pilot, a nurse and a paramedic.

“My feeling is this accident rate is epidemic,” said Jim Hall, a former chairman of the National Transportation Safety Board.

Investigators have just started looking into Wednesday’s crash and have not reached conclusions on what factors played a role. But the accident put a new spotlight on a disturbing trend. Lax government regulation and fierce competition for customers have created a disincentive for helicopter transport companies to invest in advanced pilot training and safety equipment to protect flight crews, medical personnel and patients, the aviation authorities said.

Adding to the safety problem is the pressure that pilots of medical evacuation choppers face when weighing a patient’s dire situation against their own judgment of whether conditions are safe to launch.

Too often, the result is “a bush pilot mentality” that leads to hazardous flights, Hall said.

“There were times when a dispatcher said to me, ‘If you don’t fly, the patient will die,'” said Patrick Veillette, 48, a corporate pilot in Utah who worked as an emergency medical services pilot for five years. “It is almost impossible to isolate yourself from the patient’s condition, and you really want to save that life. But if I didn’t feel confident that conditions were safe, my answer back always was: ‘One may die, but if we fly four may die.'”

The first step to improve safety on medical helicopters should be to immediately require two pilots on all medical helicopter flights to end a chain of accidents — 15 so far this year, experts said. The safety board has called on the Federal Aviation Administration to implement reforms over the last decade, including a two-pilot requirement.

As is common in the industry, the Bell 222 helicopter that crashed in Aurora after clipping radio tower equipment was flown by a solo pilot, Delbert Waugh, 69, authorities said. Waugh was responsible for flying the helicopter, navigating both visually and using instruments, communicating by radio with personnel in the copter and air-traffic controllers and looking out to avoid other aircraft, trees, buildings and other obstacles.

Two pilots are mandated on all commercial airline flights, and the pilot retirement age is 65, recently increased from 60.

“If the public were informed, no one would ever get on one of these medical aircraft,” said Christine Negroni, an aviation safety expert who has compiled a database of medical aviation accidents and incidents over the last 21 years.

Some 193 medical helicopter accidents have been reported during those years, according to statistics recorded by Negroni in the Comprehensive Medical Aviation Services Database, a division of Humanitarian Research Services Inc.

Like Wednesday night’s crash, 90 of the 193 accidents occurred between 10 p.m. and 6 a.m., a period that authorities call the “back side of the clock” when fatigue is often a mitigating factor. In addition, 47 of the accidents involved the helicopters hitting obstacles, according to the database, which is drawn from government and industry records.

“We have seen tragedy after tragedy continuing to occur for a decade and a vacuum of leadership, action or change in culture by the industry or the FAA to promote safety,” said Hall, the former NTSB chairman who is now a consultant with Chicago-based Nolan Law Group.

Aviation safety experts blame the FAA for simply recommending — rather than requiring — sweeping reforms. The FAA has encouraged medical helicopter operators to voluntarily upgrade pilot risk-assessment training and buy technology such as night-vision goggles and devices that warn pilots about obstacles and terrain.

The helicopter that crashed Wednesday night was not equipped with any warning system to alert the pilot about the whereabouts of the radio tower, FAA sources said.

Such warning systems contain updatable databases of all obstacles, man-made and natural, and terrain on Earth. The price of such a unit starts about $15,000.

The pilot of an aircraft heading toward a collision would receive an early oral warning, such as “Obstacle! Obstacle! Pull up!”

“We have all the TV and radio towers in America on our systems,” said Bill Reavis, a spokesman for Honeywell Aerospace. “Because of the guy wires coming off the tower, pilots may see the vertical tower but miss the wires.”

Officials in the medical helicopter industry say they are frustrated.

The National EMS Pilots Association met this year to discuss the spate of crashes, but members were unable to identify any obvious solutions, said Gary Sizemore, the group’s president.

Business pressures might be leading some operators and pilots to make bad decisions, Sizemore said.

“If I don’t do it, the company down the street might,” he said.