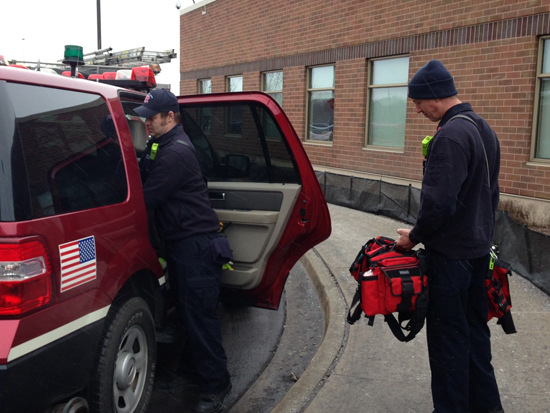 Northern Illinois is the latest region to step up their emergency preparations in case of an active shooter event. More than 15 EMS agencies in Fox Valley recently received emergency response kits that include lifesaving items meant to help treat people who have been shot. It’s the first time kits like this have been distributed in the Chicago area.

The kits are a result of a project spearheaded by the Northern Illinois Casualty Response Task Force, but they’re just one aspect of the task force’s vision. It hopes to create an effective, standardized procedure for all first responders to follow during a mass shooting event. The emergency packs and training are based off of the Hartford Consensus, which emerged in response to the rise in active shooter scenarios.

We give a thumbs up to the Northern Illinois Casualty Response Task Force for tackling the need for mass shooting training in a practical way that educates both first responders and the general public.

When a woman in Columbus, Indiana was transported for a severe leg injury, she was thankful to Columbus Regional Health EMS and the Columbus Fire Department for helping her out. However, she wasn’t real happy about losing a brand new shoe.

When responders arrived on scene to help the woman, they had to cut off her shoe to properly assess the extent of her injury. While riding in the ambulance, she told medics she was heartbroken over the destruction of her shoe that she had recently bought from a local store.

After bringing the woman to a nearby hospital, medics and firefighters knew they had to help give this Cinderella her shoe back. Columbus public safety workers, including those who didn’t assist the woman, came together and raised money for a gift card that could cover the cost of a new pair. They found the owner of the local sneaker store and shared the woman’s story. The owner instantly remembered the customer and lowered the price of the shoes.

First responders were able to reunite their Cinderella patient with her “glass slipper” by giving her the gift card while she was recovering in the hospital.

We give a thumbs up to the Columbus emergency responders for going above and beyond the call of duty by extending their care outside of the ambulance. We applaud them for their dedication to their patients’ physical health as well as their happiness.

Denver Health paramedics are being recognized as local heroes for saving the life of a police officer who was seriously injured in his line of duty. The officer, Tony Lopez Jr., was shot six times during a traffic stop, leaving him critically injured.

The seven-year veteran’s life was saved by fast-acting first responders who used three tourniquets on his limbs and rushed him to an ED. The whole process only took 11 minutes.

Lopez credits the quick, skillful paramedics for his survival because at the time, he was losing a lot of blood–Lopez went through 19 liters on his first day in the hospital.

The two medics, Dustin Morgan and Courtney Strong, were given honorary police badges and a commendatory letter from the Denver Police Department as a gesture of gratitude.

Lopez is still in recovery and he and his wife are getting ready to welcome a baby boy. After the shooting, Lopez was promoted to sergeant. He hopes to return to the force in the fall.

We give a thumbs up to Morgan and Strong for providing quick and complete care that not only saved Lopez’ life, but also allowed him to keep his limbs.

We also give a thumbs up to Denver Health for developing and providing a tourniquet training class that has clearly had a positive impact on the community.