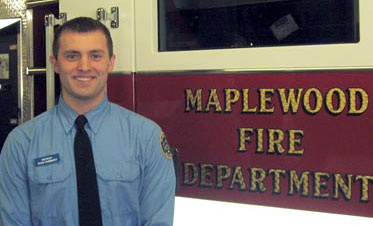 MAPLEWOOD, Mo. — Investigators planned to continue sifting through the ashes of a Maplewood home today, searching for clues about an ambush that left a rookie firefighter dead, two police officers wounded and a community searching for answers.

Just who was the shooter? Did he die Monday in the flames of a burning house on Zephyr Place? And what prompted the murderous rampage?

The slain firefighter was Ryan Hummert, 22, the son of a former Maplewood mayor, who colleagues said fulfilled a lifetime dream when he got hired by the city last year.

Hummert was fatally shot about 5:45 a.m. Monday as he stepped out of a Maplewood firetruck that had responded to a call of a vehicle on fire.

The gunman – believed to be hiding in or near a home across the street – also shot two Maplewood police officers. One of them, Adam Fite, 28, a former Jefferson County sheriff’s deputy, was critically wounded. The second officer, whose name was not revealed, was shot in the right shoulder. Both are expected to recover.

Police believe that the gunman died when the house where they think he was holed up, at 7440 Zephyr Place, burned and collapsed during an hours-long standoff.

“We have no indication that he got out of that house,” said St. Louis County police spokeswoman Tracy Panus.

But neither did police report finding any remains.

They said they did not know if the gunman lived in the house, in a neighborhood of brick homes with small, sloping front lawns a few blocks north of the intersection of Manchester Road and Big Bend Boulevard. It is about a mile from the city’s revitalized commercial strip.

Property records show that Mark J. Knobbe, 52, owns the house, where he has lived for 12 years. Records also show that Knobbe also owns a pickup similar to the one that burned in a driveway across the street from his home.

Police refused to speculate on the shooter’s identity. Maplewood Mayor Mark Langston said there had never been any problems at the address, and called the chain of events a “senseless tragedy.”

City leaders were working to organize a prayer vigil for Wednesday night.

“I can’t tell you the amount of tears we’ve seen in the hallways today,” Langston told a reporter at City Hall.

Events began about 5:40 a.m., when firefighters from Maplewood’s only fire station responded to the call.

Julia McCreary, 80, was sleeping when she heard a firetruck outside her home on Zephyr. She looked out and saw a red, older model pickup on fire in her driveway. McCreary, mother of the St. Louis County police chaplain, said she then heard several pops, like a car backfiring. She went on her porch in her pajamas. McCreary said she saw a firefighter fall at the edge of her yard. Police screamed at her to go back inside.

Stephen Porter, 12, lives just a few houses away. He said he watched the scene play out until about 10 a.m., when officers evacuated him and his neighbors.

“I heard a boom, then I looked out my window,” Stephen said. “Cops were everywhere, and a firefighter was down in front of a firetruck.”

Another witness, Sanyoug Rai, was working at a 7-Eleven store on Big Bend when he heard shots.

“I saw a cop holding his shoulder, and he fell down to the ground,” Rai said.

Moments after the initial shooting, witnesses reported a rapid series of gunshots from inside Knobbe’s house. Officers swarmed into the area, believing the gunman was inside.

Soon, smoke could be seen pouring from a front window of the house. It intensified until flames engulfed the structure by late morning, leading the roof to collapse.

Through midafternoon, police continued to blanket the neighborhood, and sharpshooters kept weapons trained on the house.

At 3 p.m., police announced that they would give no further statements Monday and that they believed the gunman died in the fire.

Word of Hummert’s death gripped City Hall, where officials remained behind closed doors most of the day. About 10 a.m., shortly before a formal announcement of Hummert’s death, a group of blue-shirted firefighters stood on the sidewalk outside the station and peered in silence toward the smoke rising on the horizon.

At 10:10 a.m., the American flag and a Maplewood city flag were lowered to half-staff. Black and purple bunting was hung from the building’s facade. A mother and her son dropped off a bouquet of flowers.

“We’ve lost Ryan in the line of duty doing what he loved,” he said. “He will be missed.”

Hummert, who graduated from Rockwood Summit High School in 2004, went to work for the city of Maplewood in August, after finishing paramedic school.

Ron Battelle of Backstoppers, a charity that provides support for families of first responders killed in the line of duty, said he could not recall a St. Louis-area firefighter murdered on the job.

Slayings of firefighters on duty are rare. The U.S. Fire Administration, a federal agency that compiles such statistics, counts only two deaths by assault among the 671 fatalities listed from 2002 through 07. There was one each in Tennessee and Kentucky, in 2005 and 2004 respectively.

“To die in a fire is one thing,” he said. “But to get shot in the line of duty is another. We’re not prepared for that.”

Hummert’s father, Andrew L. Hummert, was Maplewood’s mayor from 1983 to 1993. The slain firefighter’s parents spent about an hour at City Hall on Monday morning meeting with officials.

The volatile situation affected people across the region. In Jefferson County, where Fite had worked as a deputy, there were prayers for his recovery.

“It’s shocking whenever law enforcement gets shot at because we’re in the same profession and there is always the opportunity that it could happen to one of us,” Schumer said.