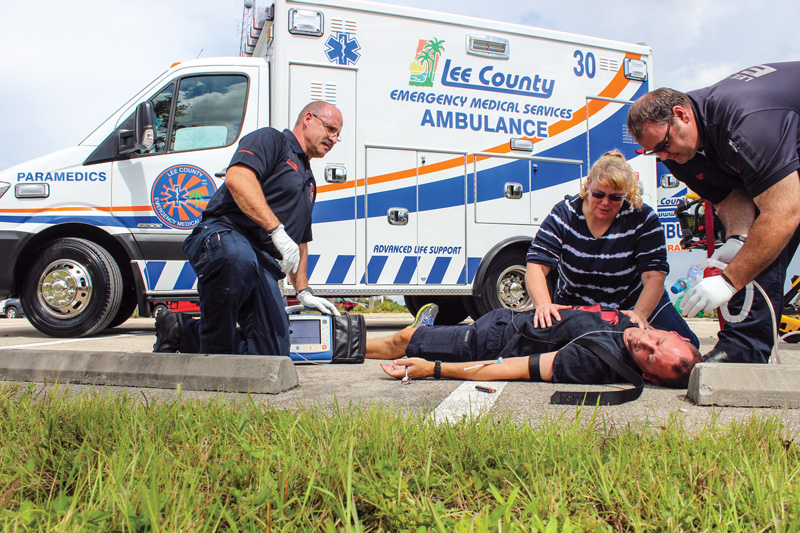 Medic 1 and Engine 1 are dispatched to a man down in a parked automobile at a local pharmacy. Law enforcement is on scene and has rendered the scene safe. Forced entry into the vehicle is made and the providers make contact with an adult male slumped over the steering wheel.

The patient’s primary assessment reveals he’s a 45-year-old male, 80 kg, unconscious and ill-appearing. He has snoring respirations and is bradypneic with retractions. He’s cyanotic and unresponsive, with a Glasgow coma score of 1/1/1 = 3. The patient is immediately removed from the auto, placed in a semi-Fowlers position on the stretcher with a head-tilt chin lift, and quickly transitioned to the awaiting medic unit.

The basic airway maneuver resolves the snoring respirations. In the ambulance, the initial assessment demonstrates the following: Central and peripheral pulses are present; regular, bradycardic rate; no obvious hemorrhaging; and the skin is cool, centrally cyanotic and diaphoretic. The airway is non-natural yet dry without excessive secretions and glossopharyngeal reflexes are minimally present. The patient is still bradypneic with symmetrical chest wall movement and some supraclavicular and intercostal retractions. Lung sounds are clear to auscultation and equal bilaterally. There’s no evidence of trauma, and exposure is unremarkable except for a fresh venipuncture in the left antecubital fossa and pinpoint pupils.

Once in the ambulance, the patient’s occiput is padded, which promotes a sniffing airway position. The patient is placed on controlled mechanical ventilation (CMV) via mask. CMV tidal volume is set at 600 mL, 12 breathes per minute, with FiO2 at 100%. Positive end-expiratory pressure (PEEP) is set to 5 cm/H2O. The patient’s blood pressure (BP) is 110/60 and heart rate (HR) is 40 with a matched sinus bradycardia on the monitor; a 12-lead ECG is without ST elevation myocardial infarction or other acute insult pattern. Intrinsic respiratory rate (RR) is 4, controlled mechanical RR is 12, and total RR is 16. Initial capnography is 75 mmHg with a boxed capnogram and no evidence of bronchospasm. Initial pulse oximetery is 55%. Blood glucose is 110 mg/dL. Temperature is 36 degrees C (96.8 degrees F).

A nasopharyngeal airway is appropriately sized and inserted in the patient’s right nare without difficulty. Vascular access is obtained; a large bore IV is placed in the right forearm and a liter of lactated Ringer’s is running at 200 cc/hr.
Within two minutes of the choreographed prehospital treatment effort the patient’s overall condition dramatically improves. 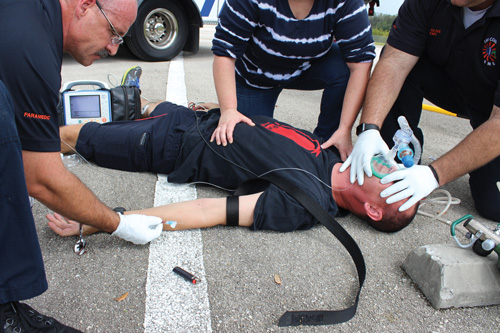 His Glasgow coma scale is now 2/2/5 = 9 and the patient is now following some verbal commands. BP remains steady at 120/70 without evidence of inadequate perfusion; skin is warm, moist and no longer cyanotic. HR has recovered to 75. Intrinsic RR remains at 4—6 with a CMV RR of 12 for a total RR of 16—18. EtCO2 decreases to 43 mmHg while SpO2 increases to 95%.

With control measures in place, Medic 1 departs the scene and begins non-emergent transport to the hospital. Despite the improvement in the patient’s condition and close proximity to the hospital, the paramedic decides to administer naloxone to improve the patient’s mentation. The patient is given 2 mg of naloxone IV over 10 seconds. Thirty seconds later, the patient violently emerges in an uncontrollable rage and begins to punch, kick and spit at the paramedic. The patient disengages the stretcher restraints and continues to pummel the paramedic, subsequently pinning her against the rear doors of the ambulance. The EMT driving the ambulance quickly recognizes the critical situation, places an emergency radio call for law enforcement and brings the ambulance to a rapid halt on the shoulder of the roadway.

As the EMT exits the driver’s compartment in haste, he’s struck by a passing automobile and killed instantly. Law enforcement arrives within one minute of the call for assistance. Additional service calls for EMS, fire and law enforcement are made. The first arriving officers split up–several officers attempt to aid the EMT on the roadway and several approach the back of the ambulance.

As they open the rear doors of the ambulance, the paramedic falls out of the unit and lands head first on the roadway. She’s immediately unconscious with decorticate posturing. The patient continues to fight and destroy the ambulance patient compartment. The primary law enforcement officer deploys his conducted electrical weapon, rendering the patient incapacitated. Four officers in total place the patient into custody. Medic 2 and Engine 1 arrive on-scene and declare the unconscious paramedic a trauma alert. She’s immobilized and transported to the trauma center, where she undergoes an emergent operative procedure to repair an intracranial hemorrhage.

Medic 3 arrives on scene and assumes care for the original patient now in law enforcement custody. The patient is transported without further incident. The four law enforcement officers involved in the takedown of the patient were subsequently treated at the hospital after being exposed to blood and secretions. 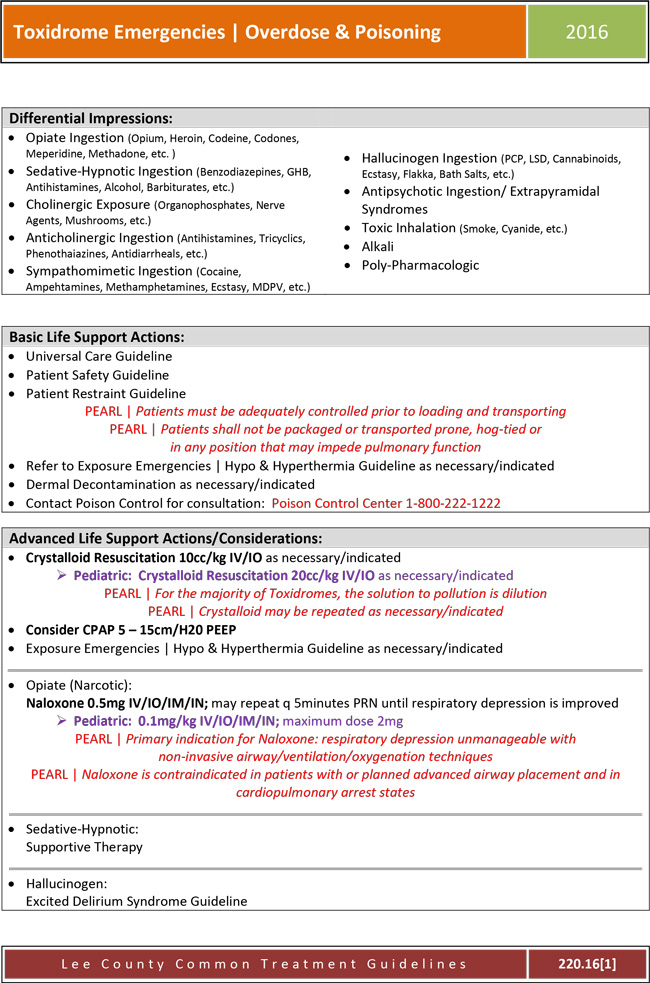 In the face of an international opioid epidemic, EMS leaders and medical directors should be asking serious questions about the use of naloxone in their services. Is giving naloxone to all known or suspected opioid overdose patients appropriate? How does today’s opioid epidemic compare to the opiate issues of 1970s? Is naloxone safe? Is naloxone a benign drug? What’s today’s prehospital goal for the administration of naloxone: restoration of respiratory effort, restoration of mental status, or both? Should cost be a contributing factor in how services and communities deploy naloxone? Are there ethical and/or legal consequences for not administering naloxone to suspected opioid overdose patients when respiratory embarrassment has otherwise been resolved with noninvasive airway/ventilation/oxygenation techniques? Should all patients who receive naloxone be transported to the hospital? What does the current body of evidence show and is a one size fits all prehospital strategy the best approach for the use of naloxone?

The Lee County Department of Public Safety/Division of EMS (LCDPS/EMS), in Fort Myers, Fla., has taken a slightly different stance when it comes to the prehospital management of opioid/narcotic toxidromes. For a host of reasons including biphasic opioid and poly-pharmacological overdoses, cost, and patient and provider safety–”let sleeping dogs lie”–naloxone is administered only when respiratory depression is unmanageable with non-invasive airway/ventilation/oxygenation techniques. If naloxone is indicated, it’s given in 0.5 mg increments with the end-point to promote sufficient respiratory effort, not to restore mentation.

Today’s opioid epidemic is vastly different than years past. Fentanyl, cocaine and other synthetic-laced heroin, and polysubstance coingestants pose concern for patient and provider safety. The naloxone response in these cases is far from predictable. Despite dogma information to the contrary, high-dose naloxone and/or rapidly infused naloxone may cause a catecholamine release and consequently produce pulmonary edema, cardiac arrhythmias, vomiting and violent behavior.1,2 Furthermore, and as described in the Lee County Common Treatment Guidelines (based on recommendations by the 2015 American Heart Association ECC/CPR Guidelines), patients known or suspected to be an opioid overdose with no definite pulse may be in cardiac arrest. These patients need to be managed as primary cardiac arrest patients. Standard resuscitative measures, with a focus on high-quality CPR, should take priority over naloxone administration.3 There’s no therapeutic value in giving a cardiac arrested patient naloxone; the drug does nothing to restore a pulse.

Southwest Florida hasn’t been immune to the new wave of heroin. Although the aforementioned case review story is fictional, injuries to LCDPS/EMS employees have occurred when the former “naloxone for all overdoses” approach was sanctioned. Furthermore, a number of naloxone cases prior to the April 2016 guideline change required high-dose sedation to control combative emergence from opioid toxidromes.

This hardly seemed like good prehospital care, and it most often resulted in a hospital admission for the patient. This, coupled with the skyrocketing cost of naloxone, prompted staff to re-evaluate. Working with experts in the field and taking a “think global, react local” approach, the Lee County Medical Care Council approved the new Toxidrome Emergencies: Overdose & Poisoning Guideline in April 2016.

Although this approach to opioid toxidromes was met with some angst on the part of local receiving hospitals, a paradigm shift in how ED physicians are managing these cases has begun. Naloxone infusions, as opposed to IV or IM naloxone, appear to be making headway with the local healthcare system. Patients are slowly emerged from their opioid intoxication in the controlled hospital environment with multiple resources at the ready should conditions warrant.

The current stratified approach to opioid toxidromes in Lee County has resulted in zero safety events to patients and providers. LCDPS/EMS remains committed to achieving a safety culture in clinical excellence that’s evidence-based and scientifically driven.