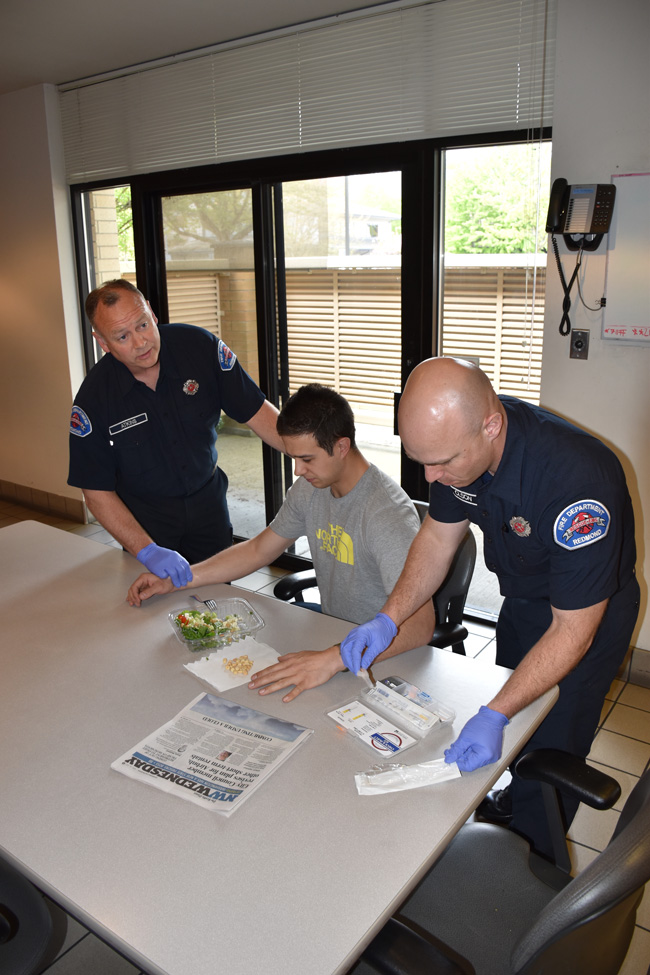 Anaphylaxis is a severe allergic reaction to an allergen, which can become life-threatening if not treated immediately with epinephrine. Epinephrine acts as a bronchodilator and vasoconstrictor to reduce the symptoms of anaphylaxis and maintain blood pressure.

Patients with known anaphylaxis are typically prescribed epinephrine automatic injectors (EAIs) for personal use in the case of an anaphylactic reaction. Due to the need for rapid treatment, and because of the ease of administration, virtually all states authorize administration of epinephrine via auto-injections as part of emergency medical technician (EMT) scope of practice.1

In 1999, the Washington state legislature passed the Christine Castner Act requiring that all EMTs be trained and equipped to administer epinephrine with EAIs.

Advantages of using a Check and Inject epinephrine kit (vs. an auto-injector) is that a single vial can be used for both adult and pediatric patients and repeat doses can be administered from the same vial.

In 2004, King County EMS published the results of our initial three-year experience with EMT administration of EAIs.2

In 2009, partly in response to rising medication cost, the Washington state legislature allowed county medical directors to decide whether to use EAIs or to draw up 1:1000 epinephrine to administer intramuscularly (IM).

In early 2014, King County began a program authorizing EMTs to draw the correct dose from a vial of epinephrine with a needle and syringe and administer the drug IM. The program was called “Check and Inject.” In this article, we describe the training program and economic impact of substituting IM epinephrine for EAIs.

Excluding the city of Seattle, King County has a population of 1.4 million people who are served by a two-tiered EMS system.

The first tier consists of firefighter/EMTs trained in BLS procedures, including administration of aspirin and epinephrine, CPR and defibrillation using AEDs.

The second tier consists of paramedics trained in ALS procedures, including endotracheal intubation and the administration of medications after obtaining vascular access.

The 9-1-1 dispatch centers in King County adhere to the King County Criteria-Based Dispatch Guidelines, which indicate that BLS units must be dispatched for all potential allergic reactions. 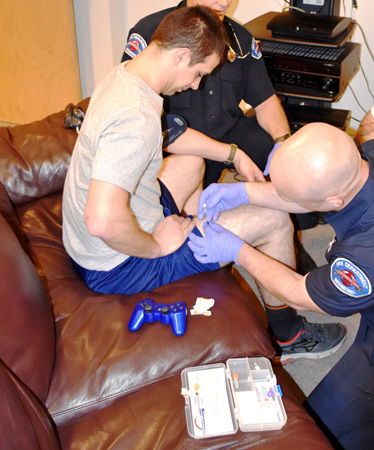 Prior to administering IM epinephrine in the field, fire
department EMTs receive two hours of training, which includes
practicing administration of the drug on manikins.

ALS units are also dispatched if the patient presents with the following characteristics: unconscious, non-responsive to voice or touch; respiratory distress (e.g., unable to speak normally or sitting, standing and leaning forward to breathe); audible wheezing or stridor; swelling in throat, tongue or difficulty swallowing and unable to speak normally; sign of shock (e.g., syncope when sitting/standing).

Training for the Check and Inject program began in January 2014, and it took six months for agencies to train all EMTs in the county. We utilized a train-the-trainer approach.

There are approximately 2,500 fire department EMTs and 1,000 private ambulance EMTs in King County. Training typically required two hours and EMTs were trained in small groups of 5-15. The first hour was lecture-based and focused on recognizing the signs and symptoms of an anaphylactic reaction and the proper administration of epinephrine IM via a syringe and needle.

There was also instruction in the need for proper documentation, including patient signs and symptoms, suspected triggers, any epinephrine that was administered prior to their arrival (e.g., from an EAI), vital signs pre- and post-epinephrine administration, ALS evaluation and transportation details.

The second hour of each training program provided an opportunity for EMTs to practice with the Check and Inject materials and administer the drug on manikins and/or oranges. All training was carefully monitored by instructors approved by the King County EMS system. 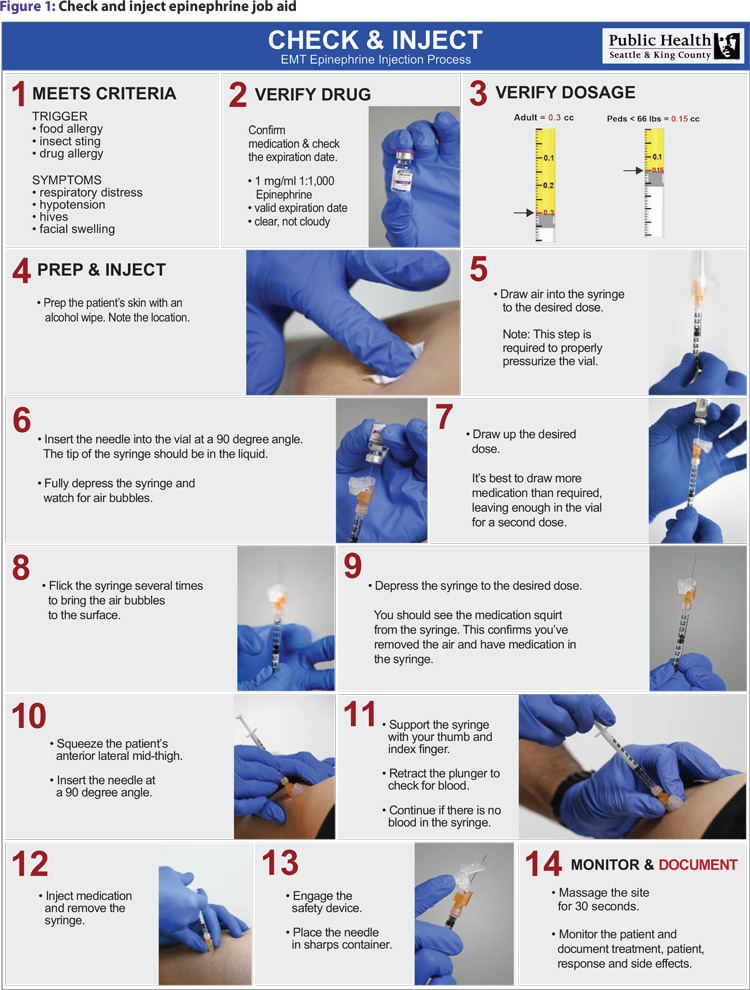 When all EMTs within a fire department completed training, that agency was authorized to allow their EMTs to administer the medication for anaphylaxis. By July 1, 2014, all agencies in the King County EMS area were participating.

After the initial training, an online training course was developed by the King County EMS training section. EMTs were required to review the content quarterly with an opportunity for additional practice with the needle and syringe.

All agencies were provided a Check and Inject kit for each EMS vehicle. The kit was made up of a plastic box (1″ x 4″ x 6″) that was sealed and contained the following items:

For the first 12 months of the program, EMTs were required to call King County EMS after each incident in which IM epinephrine was used. A representative from King County EMS then retrieved the used Check and Inject kit and the run report from the involved station to review the proper use and documentation of epinephrine IM administration. A new kit was provided to replace the used kit. 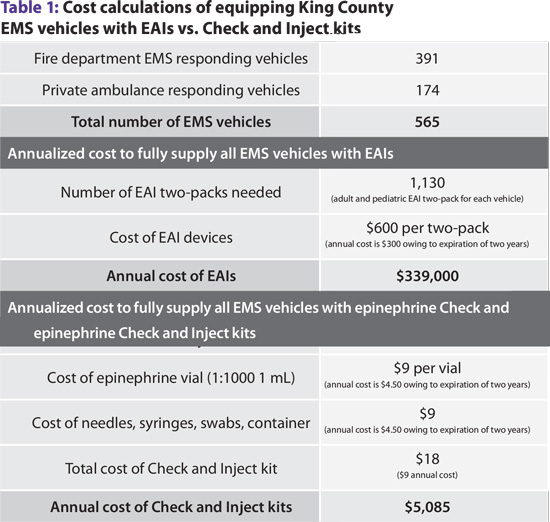 The run reports of all cases were abstracted by senior paramedic Jonathan Nolan and the medical director at the time, Mickey Eisenberg, MD, PhD, as well as Andrew Latimer, MD, an EMS fellow at the University of Washington.

The economic cost of EAIs and Check and Inject epi kits focuses on the direct annual cost to equip each EMT vehicle with either EAIs or epi kits.

Annual costs for all supplies were determined for 2017. It doesn’t include cost of replacements for use or breakage, nor does it include inventory, storage or administrative costs.

A web-based search in May 2017 for EAI two-packs for adults and children (available through EMS pharmaceutical supply sites) revealed costs ranging from $600 to $900 per two-pack.

The current annual cost to equip all responding vehicles and transport ambulances with EAIs would be $339,000. This calculation uses the low end of the EAI two-pack range, $600 per two-pack, and assumed a two-year expiration. The annual cost of equipping a similar number of vehicles with Check and Inject epi kits was $5,085.

The EAIs are packaged with two injectors of the same dose per box (in case a second injection is required) and each EMS vehicle is required to carry an adult dose and a pediatric dose.

For the epi kit, a single vial (costing approximately $9) can be used for both adult and pediatric patients and repeat doses can be administered from the same vial.

Table 1 shows the cost calculations for equipping all EMS vehicles in King County with EAIs and Check and Inject kits.

The net annual cost-savings is approximately $334,000. The estimate does not take into account replacement costs of the epinephrine administered; however, including this would magnify the cost savings.

The analysis also assumes the needle and administration cost, including the container, last for two years when, in fact, it’s likely longer until expiration. As mentioned above, we experienced expiration dates of 18 months for the medication instead of 24 months. Had we used the 18-months figure instead of 24 months the cost-savings would have been an additional $100,000.

King County EMS changed the method of epinephrine administration for anaphylaxis from automatic injectors to IM injections for EMTs. Conservatively, we estimate an annual cost-saving of $334,000.

Ackowledgment: The authors thank the EMTs and paramedics of King County for their professionalism in the delivery of emergency care. Special thanks to Megan Zdancewic and David Sanchez for assistance in data collection and to Jim Duren for helping establish the Check and Inject program.

For more information on this program, contact Jonathan Nolan, EMT-P, at jonathan.nolan@kingcounty.gov.