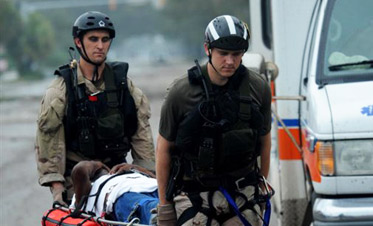 JEMS.com Editor’s Note:After Hurricane Katrina struck the Gulf Coast, many emergency workers and residents developed what was dubbed The Katrina Cough. Click here to read “The Katrina Cough”, a JEMS.com exclusive article about this respiratory ailment.

HOUSTON — A 30-year-old man falls 25 feet from a cherry picker, smacking his head and breaking his leg so badly that bone pokes through his thigh. A trauma team at Texas Medical Center’s Memorial Hermann Hospital crowds around him.

Nearby, a trauma team prepares for a patient arriving by helicopter who was hit in the head by a falling tree.

It is noon Thursday, five days after Hurricane Ike. Every bed in the emergency department is full. Nearly every 20 minutes, a helicopter carrying another critically ill person lands on the roof.

There are at least 10 people with severe stomach ailments, a woman who sliced her thigh open with a chain saw, three people awaiting emergency dialysis, two broken legs, a woman with pregnancy complications who arrived in a Black Hawk helicopter and one child with asthma. Thirteen more people sit in the waiting room.

“We are getting slammed,” says Jamie McCarthy, director of emergency medical services at the hospital, who has been sleeping in his office on an air mattress since the day before the storm.

The Texas public-health commission has warned of a public-health crisis if post-hurricane conditions persist. The University of Texas Medical Branch, a major hospital with a trauma center in Galveston, is closed because of water and wind damage. Health officials already are seeing a spate of hurricane-related injuries and illnesses.

The day after the storm, the Houston Fire Department fielded 4,700 emergency calls, more than four times their average.

Most dialysis clinics lack power and remain closed, forcing patients to seek care at the ER or even relocate to a special shelter in Dallas. “People are coming to the hospitals in crisis because they haven’t been able to get dialysis for days,” Parisi says.

A family practice affiliated with University of Texas Medical School at Houston is treating overflow patients from the ER who have less critical illnesses and injuries. Doctors there saw 14 patients by Thursday afternoon, including a Houston police officer with a cut on her face and a woman who had fallen at a supermarket.

“We’ll handle whatever comes in here,” says Carlos Moreno, a professor at the medical school who runs the clinic. His doctors have seen skin rashes, insect bites, asthmatics, fractures, back injuries and minor cuts.

Starting Wednesday, paramedics were told to bring the least critical patients a few blocks away to an engineering building at Rice University, where the federal government’s Disaster Medical Assistance Teams (DMAT) set up a mobile medical unit.

More infections expected
Another disaster medical team that has worked in the Galveston hospital’s emergency room since Sunday treated 650 patients by Thursday night. About 60% were flown out by helicopter.

“People who stayed during the storm are coming on foot, by bicycle,” says Michael Purcaro of the Connecticut-based medical team that, along with an Iowa team, is staffing the Galveston DMAT.

Doctors there are seeing exhaustion, heat-related illnesses and cardiac problems, he says. Patients with serious illnesses and injuries are sent by helicopter to Houston.

Purcaro anticipates more stomach illnesses, rashes and infections as more residents and emergency workers come in contact with storm debris, flood water or the slimy, smelly muck that has pooled in Galveston’s streets.

Marta Santana, 51, a Galveston resident who stayed on the island, says she and three of her friends flush their toilets with floodwater that they collected in buckets. “We’ve been using bottled water to clean up,” she says.

The bacteria in the flood zone have had time to incubate, UTMB President David Callender says. “There is no running water, no sewage process, no natural gas to cook food. Food is spoiled. There’s all this debris,” he says. “We’re moving into a high-risk phase.”