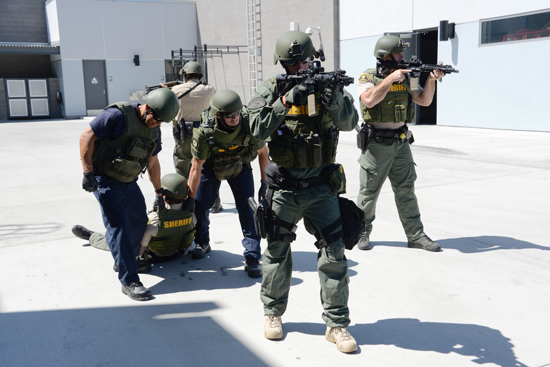 In the wake of Columbine, Virginia Tech, Aurora, Sandy Hook and other recent active shooter/mass casualty incidents (ASI/MCIs), there are numerous federal, state and local agencies scrambling to establish operational guidelines for combining law enforcement, fire and EMS first responders into rescue task forces (RTFs) prior to the arrival of tactical teams.1

At the same time, thousands of law enforcement officers (LEOs) are being violently assaulted each year and, as a result, there’s a national call for training and equipping all officers for self-aid and buddy aid (SABA).2 However, unified command and interagency emergency operations plans will only work if first responders are properly equipped and trained to assess, treat and extract casualties much faster than normal EMS operations.

Therefore, the main purpose of this article is to identify specific core skills, training and equipment necessary to assure that the RTF brings assets, rather than liabilities, into an ASI/MCI. This will increase efficiency of operations, thereby decreasing preventable deaths, rather than adding more potential casualties.

Tactical Combat Casualty Care
TCCC is currently the only evidence-based standard of prehospital care rendered to a casualty in a tactical, combat environment from the point of injury until they arrive at the medical treatment facility. A comprehensive study of preventable deaths in Vietnam and Somalia concluded the three most common causes of preventable battlefield death are exsanguination from extremity wounds (60%), tension pneumothorax (33%) and airway obstruction (6%).6

Although battle-proven TCCC principles on potential causes of death that can kill within 20 minutes from the point of injury clearly apply to civilian tactical trauma care, the terminology is military, which can sometimes be controversial. Tactical emergency medical support (TEMS)7 or tactical emergency casualty care (TECC) are civilian terminology for TCCC. The Committee for Tactical Emergency Casualty Care (C-TECC) used the military battlefield guidelines of TCCC as the evidence-based starting point in the development of TECC terminology.8

TCCC/TECC doctrine states three distinct threat levels or “phases” which indicate the kind of care that should or shouldn’t be rendered. Recognizing that nothing is aboslute, these are guidelines where “tactics drive medicine.”

1. Hot zone (care under fire/direct threat): The casualty is exposed to effective or potentially effective enemy fire. Either there is a clear and present active shooter, or the casualty is still in the line of fire where a perpetrator can pop up and start shooting again. All efforts are directed at eliminating the threat and/or getting the casualty and the team out of the line of fire. Assuming the team has established fire superiority, the only appropriate treatment would normally be to stop uncontrolled extremity hemorrhage with a tourniquet in less than 20 seconds. If fire superiority can’t be reasonably assured, the casualty should be immediately extracted using standardized techniques without medical aid.

2. Warm zone (tactical field care/indirect threat): The casualty is still on the inner perimeter of a live mission, but is in a position of cover and concealment, not directly exposed to enemy fire. Appropriate actions at this stage include tourniquet application, wound packing, hemostatic agents, compression bandaging, chest sealing and/or decompression and advanced airway control.

3. Cold zone (tactical evacuation/evacuation): The casualty and the medic are now out of the inner perimeter.

RTF Basics, Configuration & Movement
In May 2001, the Colorado Governor’s review of the Columbine massacre called for a new paradigm shift where police officers should no longer simply stage and contain active shooters. They should immediately call SWAT, but not wait for their full response. Rather, they should “be trained at the concepts and skills of rapid deployment.”9

This ushered in the concept of the rapid reaction team, or contact team, where first arriving officers team up, typically in a four-man diamond, but maybe two”man or even solo, to move to “the sound of shooting.”10

In 2008, the Arlington (Va.) Police Department entered into an agreement to train with Arlington Fire Department to form RTFs that will trail contact teams into warm zone areas they cleared to treat and/or extract victims.11 This innovative approach led to a nationwide shift now supported by the U.S. Fire Administration and the Federal Emergency Management Agency.12

Similarly, if a tactical medic is among the first responders, he or she would be the right person to become part of the first RTF.

The minimum configuration of an RTF would include two patrol officers for front and rear security and two paramedics with the same level of ballistic personal protective equipment as the officers and be equipped with tactical medical equipment. If there are enough RTF trained responders, a more robust RTF can be formed into a “diamond.” (See Figure 1.) 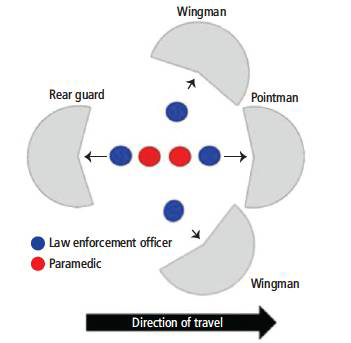 The first RTF will advance in warm zone area already cleared by the contact team and treat and extract victims. If there are more victims in other cleared warm zones, then other RTFs can leapfrog past the first RTF to attend to the victims in those areas.

All movement into or out of warm zones are tactical decisions made by the LEOs who are providing cover for the medics.

It should also be clearly stated that warm zones can suddenly turn into hot zones when the prime suspect, additional suspects or potential explosive devices are encountered unexpectedly. Therefore, all team members should be prepared to immediately evacuate on the command of the law enforcement officers.

Building Motor Memory Core Skills
Specific tactical medicine core knowledge and skills should be taught to all levels of emergency responders and should be done prior to multiagency drills, scenarios and actual tactical missions.

The most important part of this is repetitive practice of core skills. Once this is accomplished, there will be true interoperability and minimum time-on-target during ASIs/MCIs or any life-threatening penetrating trauma.

Certain core skills, such as effective tourniquet application within 20 seconds, automatic extraction handholds, etc., can only be performed under pressure if the skill is stored and able to be instantly retrieved from memory. This is called “procedural memory” or “motor memory.”13

In training literally thousands of first responders, the authors have found that motor memory of the complex-motor skill of applying a combat application tourniquet (CAT) in less than 20 seconds requires 15—25 repetitions (depending on the student) under various conditions.

The best way to repeat the skill is to actually practice it from top to bottom. Once the student is confident in the skill in a well-lit room with no pressure, it should be repeated under a compressed time frame in low light with their pulse rate elevated (as is likely in a real-life scenario).

Once a complex motor skill has been performed correctly several times during core training, it can be visualized and practiced mentally step-by-step and this will be 85—90% as effective as physically repeating the same skill.

There are many different tactical medical courses taught by various certifying agencies such as the National Association of EMTs (NAEMT), National Tactical Officers Association (NTOA) and state offices of emergency services. They can range in length from four hours to several days.

Victim Movement
The key to effective and rapid casualty extraction is also repetitive practice of interoperable skills within each agency and between agencies in a given region.

If there’s no uneven terrain or long stairways to climb, stretchers or drag litters might be the most expedient way to get victims out of the warm zone. If there’s only one or a few victims in an outside, open area, and an armored vehicle is available, it can be used as a tactical extraction vehicle. If the victim is a police officer or firefighter or anyone wearing body armor or some kind of harness and they’re on a flat surface, then a one- or two-person drag can be used. (See photo above.)

However, there may be multiple victims and they may be strewn in far-flung areas with uneven terrain, or they may need to be quickly extracted through narrow hallways or doors or quickly loaded into various vehicles of different configuration.

A national focus group under the National Tactical EMS Council (NTEMSC) recently identified four manual lifting techniques, referred to as tactical rescue extractions (TREs), which can be useful in these circumstances particularly when you don’t have various litters or technical rescue equipment readily available. Figures 2—7 illustrate the four basic TREs that should be taught and refreshed in all tactical medical courses.

The interoperable handholds used in the manual TREs can be used to lift victims out of the street into vehicles of various configuration. Once all personnel learn these, a victim can be extracted in as little as 12 seconds from the time the vehicle stops in front of the victim to the time it speeds from the potential line of fire.

Equipment should be staged in a kit (waist pack, vest or pockets on the front of body armor) so it can be accessed with one hand without looking or putting anything down. Even a backpack is too cumbersome for situations in which you have to move your victim unexpectedly.

Tactical Medical Equipment for LEOs
A minimum of one tourniquet should be carried at all times by every law enforcement officer for self-aid, partner- and citizen-aid as recommended by the Hartford Consensus.14

All San Diego County Sheriff’s deputies are issued an IFAK which is placed in their vehicle alongside their Kevlar helmet. Many deputies have built an active shooter vest that they can throw on prior to forming a Contact Team and going in on the threat. Those officers mount their issued IFAK on that vest.

All San Diego Police Department (SDPD) officers are offered an on-duty four-hour TCCC class once a month. At the conclusion of training, they’re issued a tourniquet they can wear at all times.

All officers are also issued a mini IFAK containing hemostatic gauze and a simple compression bandage that stretches and adheres to itself with Velcro strips. The mini IFAK is shrink-wrapped in a tear-open package that can be carried in their shirt pocket or in the ceramic plate pocket of their body armor.

The first model places the body armor on the outside of their fire/EMS personnel with special uniforms that blend in with their local LEOs. Slightly more expensive, this provides a much lower profile for these personnel and possibly detracts an active shooter from aiming at the most visually attractive target.

The second model places the body armor underneath the fire/EMS personnel’s normal medical response uniform which clearly identifies them to perimeter officers in the initial stage of ASIs/MCIs. It’s never intended for these personnel to enter the hot zone where there’s an active shooter.

Conclusion
The paradigm shift of training first responding LEOs in forming contact teams and “moving to the sound of the shooting” prior to the arrival of a full SWAT team happened several years ago. It may be the same with the RTF concept. Some fire/EMS personnel may choose to participate on an ASI/MCI RTF and some may not.

The key to instilling first responder confidence in these critical situations is the repetitive practice of core skills: tactical movement with cover officers, rapid application of medical skills under pressure and effective interoperable extraction techniques. 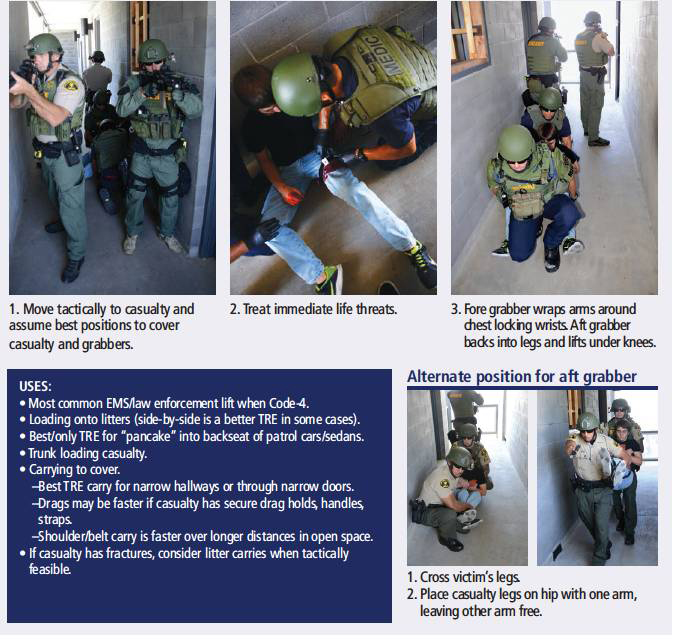 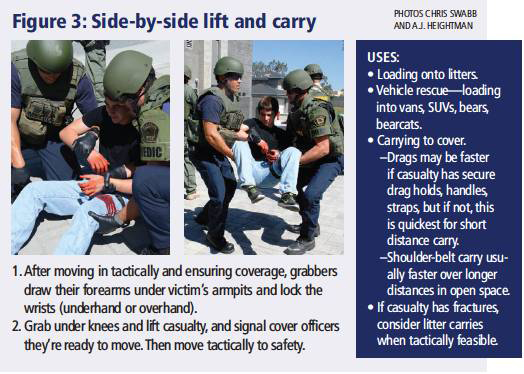 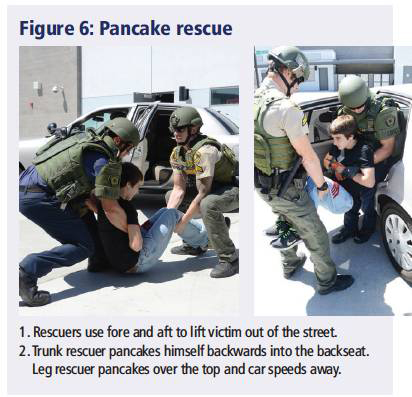 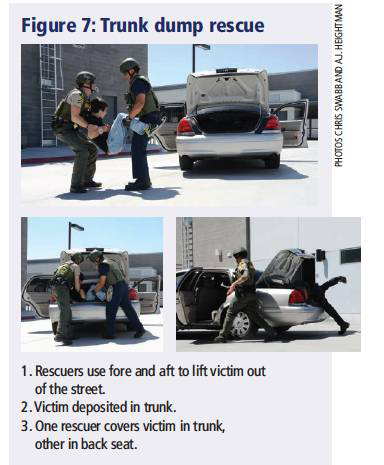