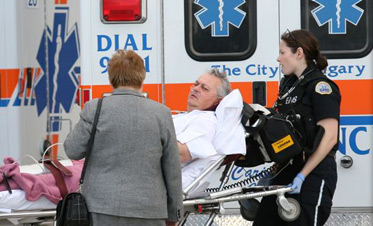 This article, which appears in the journal Injury, accompanies one entitled International comparison of prehospital trauma care systems. Both report essentially the same findings.

The authors undertook a review of trauma care in the following countries: Australia, Austria, Canada, Greece, Germany, Mexico, Iran, New Zealand, the Netherlands, the United Kingdom and the United States. They extracted data from various trauma registries and examined what were felt to be common key indicators, such as patient demographics, response crew configuration, scene time, mode of transport and injury severity.

In their abstract, they report the following. A total of 30,339 subjects from one or several regions in 11 countries were included in this analysis. Austria (51%), Germany (41%) and Australia (30%) reported the highest proportion of air ambulance use. Monterrey, Mexico (median 10.1 min) and Montreal, Canada (median 16.1 min) reported the shortest, and Germany (median: 30 min) and Austria (median: 26 min) reported the longest scene times.

Use of intravenous fluid therapy among advanced EMS systems without field physicians varied from 30% (in the Netherlands) to 55% (in the US). The corresponding percentages in advanced EMS systems with physicians actively involved in prehospital trauma care, excluding Montreal, ranged from 63% (in London) to 75% in Germany and Austria. Austria and Germany also reported the highest percentage of prehospital intubation (61% and 56%, respectively).

They made no conclusions other than to acknowledge that this was one of the first comparison of international EMS delivery.

Although I applaud the authors for their heroic attempt to make sense of a subject that for most of us is indefinable, I would ask the authors to be more accurate in the use of titles and descriptors in their abstracts. This study is another example of how important it is to read the entire article and not make assumptions based on its title or abstract. This was not a study of EMS but rather a review of trauma patients by EMS.

Altough the title states developed and developing countries, there is only one study area that would be considered developing and that is Mexico. The other countries have mature and robust systems. Further, the specific systems in the countries reviewed may not be representative of the country as a whole. I m no expert on most of the countries reviewed, but I question whether King County, Wash., is representative of trauma care in the entire United States.

Despite these issues, the authors do report some interesting findings. Of these, the relatively high use of air medical services by Austria, Germany and Australia is an interesting one worthy of a more intense review. The service area and population densities of these three countries varies dramatically.

What I found most interesting in this study were items that can be found only in the tables, which listed the demographics and injury severity scores of patients. In particular, Greece, Iran and Mexico had the largest percentage of trauma patients under the age of 15, with 22%, 20% and 16% respectively. On the other side of the age spectrum, Canada at 29% had the largest percentage of trauma patients over the age of 65. This degree of variability in demographics may or may not be representative of the nation but may reflect cultural differences as it relates to health care in general or even age-related activities that are prone to trauma, such as driving.

Again, I want to thank the authors for both of these articles. Trying to describe and compare international trauma systems is akin to the story of the blind men describing an elephant when each can only touch or smell are small part of the animal. It s my hope that similar studies will be undertaken in the United States to compare data from all types of systems with the goal of defining best practices in trauma care.