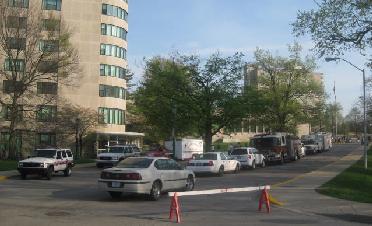 Just after two o clock Tuesday afternoon, Indiana University Police got a call to the residence hall on a welfare check. After going to the third floor of the building, officers called for HAZMAT crews after detecting a chemical in the air.

“The Bloomington Township HAZMAT team arrived, went upstairs and, with their instruments, indicated there was no hazardous chemical or anything in the air,” said IU Police Chief Jerry Minger.

Investigators evacuated students living on the second, third and fourth floors as a precaution. Officers said they attempted to go through one room but it had been sealed from the inside and barricaded.

“When the staff entered through the first door of the room, on the door of the closet there was a sign which said Warning H2S , which indicates hydrogen sulfide, which is toxic,” Chief Minger said. “Our officers went up to do a closer search with the team on the second trip to the room and they found a deceased male, believed to be the student that resided there.

Investigators said the student was inside the closet. Next to him was a bucket of hydrogen sulfide.

“The bucket was actually open where chemicals had been mixed,” said Chief Minger.

Max Weinberg lives on the third floor. Weinberg said he s surprised by what happened.

“I actually went to an exam this afternoon and came back and they wouldn t let us up, so I went away for a while,” said Weinberg.

Stan Caudle said the entire incident could have been much worse.

“I mean it s sad that somebody had to take their life over something. We don t know what it was and it s just sad to hear that happen. But I mean, especially in a way could harm potentially how many other students that could live in this dorm. It s kind of scary,” said Caudle.

IU police said until an autopsy is performed, they won t know exactly how student died but they don’t suspect foul play at this point.