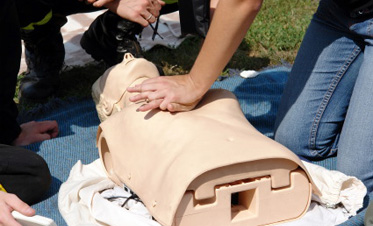 Cardio-pulmonary resuscitation used to involve pressing on a cardiac arrest victim s chest followed by mouth-to-mouth resuscitation and repeating the process. Because many people aren t trained in CPR or fear placing their mouth on a stranger s, EMSA and other responders began instructing callers to perform 400 chest compressions enough to keep circulation going until the ambulance arrives.

It was a complete changeover, said T.J. Reginald, who works for EMSA s clinical oversight board. Out of 40 cardiac arrest calls a month in Oklahoma City, the 400 compressions will apply to 32 of them, he said.

Reginald said the departure from traditional CPR has proved effective, with patients often resuscitated in the field before they arrive at the hospital.

This is key because brain damage begins within four to six minutes of losing oxygen.

If the person s body is not able to circulate blood on its own by the time they arrive at the hospital, the chance of survival is minimal, he said.

EMSA has seen a 23 percent increase in bystanders use of CPR since December 2005 and has seen an increase in the number of patients who leave the hospital without neurological damage, Reginald said.

People are more likely to do CPR if they don t have to give the mouth-to-mouth part, said Frank Gresh, EMSA s director of communications.

Although instructions from dispatchers are simpler, barriers to CPR use persist.

One of the main obstacles is the strength required to move adults onto their back and press the chest hundreds of times with 25 pounds of force.

It is a physically demanding part of EMS (emergency medical services). CPR will really wear you out, Reginald said.

A stop of even 10 to 15 seconds can be enough for the person s circulation to plummet. Don t stop pressing until the ambulance arrives, he said.

Responders reach patients within 4 1/2 minutes about 60 percent of the time and reach them within eight minutes in almost all cases, he said.

We re getting there fast enough where once we arrive we can begin the other procedures, he said.

Responders almost always arrive before the caller has reached 400 compressions.

It all came back to him

When Jill Finley didn t wake up on a Saturday morning in May, nothing her husband tried would revive her.

He threw water on me. He tried everything, said Finley, now a healthy 32-year-old.

She was saved by her husband s knowledge of CPR and emergency dispatchers instructions.

His efforts have received national media attention and made him an Oklahoma Heart Hero 2007 finalist.

Her husband, Ryan, had taken a CPR class while in college more than a decade before, and he remembered what he learned.

When he got me on the floor and the 911 operator started telling him what to do, it all came back to him, she said.

He continued CPR until the ambulance got here.

The American Heart Association continues to support the previous way of performing CPR.

The organization argues its use broadens CPR use to drowning victims, those with respiratory problems and other conditions that require help breathing.

The heart association recommends a compression-to-ventilation ratio of 30:2 about 100 compressions per minute at 30 compressions, two breaths.