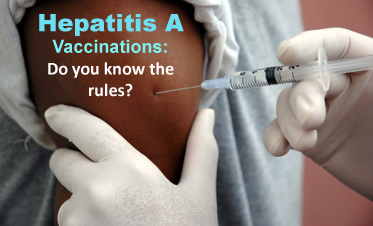 News Item: The Associated Press reported that an aide to Representative Bennie Thompson (D-Miss.) has suggested staffers visiting the medical facilities at the Talladega Superspeedway and the Lowe s Motor Speedway should be aware of “an unusual need for whomever attending to be vaccinated against Hepatitis A and B” in addition to the usual childhood shots and seasonal flu vaccine.

The fact that it was an aide to a Democrat who wrote the memo has predictably prompted a Republican response. And the article is replete with quotes from respected public health officials who most of us actually in public health have never heard of — such as Dr. David Weber of the University of North Carolina. These “officials” are quoted saying academically clever things like, “What do they know about NASCAR that we don’t?” as well as citing multiple examples of Democrats and Republicans who claim to be NASCAR fans.

From my view, the incident is nothing more than another sign that our nation is being run by children fresh out of graduate school who are building their resumes by fetching Starbucks for senators and vacantly listening to earnest constituents until they can get a job that pays real money.

(This is only half a joke. In my trips to D.C., you can tell the congressmen and senators who haven’t been totally absorbed within the Beltway by noting that they hire staffers who have actually lived within the state. You learn to value those kind of contacts. I ll never forget my first visit to the office of one of our former representatives. After I had alluded to some specific Kansas needs, a staffer finally confessed to me that the farthest west he d ever been was Chicago, and then only for a wedding. Unfortunately, this experience is more the rule than the exception.)

The previously mentioned news item relates to an issue that came before the entire health-care community during the floods in southeast Kansas. There are many questions about Hepatitis A, and the need for vaccination for health-care workers (including EMS crews) and others working in flooded areas during the rescue and recovery phases of the operation. Given that new recommendations regarding the use of Hepatitis A vaccine exist, it seems like the right time to revisit the issue.

A quick clinical review gets us started. Hepatitis A is a viral illness resulting from infection by a picornavirus that causes inflammation of the liver. Hepatitis A is transmitted by the “fecal-oral route, as water or other substances contaminated by viral-laden feces come in contact with the mouth through ingestion of tainted food or water. (This is one of the reasons why hand washing and minimizing bare hand contact with food in restaurants is so critical). The virus is also spread through sexual contact.

Infection with Hepatitis A may be asymptomatic. When signs and symptoms do occur, they’re usually of acute onset and may include fever, fatigue, anorexia, nausea, abdominal pain, darkened urine and jaundice. Symptoms usually follow a 28-day incubation period. They typically last less than two months and rarely longer than six. No specific treatment for Hepatitis A exists, but antibodies developed during an acute episode provide lifelong immunity.

An inactivated virus vaccine for Hepatitis A, however, does exist. The Advisory Committee on Immunization Practices (ACIP) has recently recommended that all children be immunized with a two-dose regimen starting at 1 year of age. This is a significant change in direction; just a short time ago the vaccine was suggested for universal use only in states, counties and communities where the rate of Hepatitis A is more than twice the national average (at last count, the list was anywhere between eight and 14 states, depending on who you asked.) The efficacy of these programs in reducing rates of childhood infection was so dramatic that the recommendation was expanded to apply to all children.

Adults may also be vaccinated against Hepatitis A, but the indications for its use are rather narrow. People who travel or work in countries with high Hepatitis A rates, men who have sex with men, and drug users are at risk and may benefit form vaccination. People with chronic liver disease or blood clotting disorders (such as hemophilia) who need to receive serum factors should also be immunized. Those who work in occupational settings with Hepatitis A in a research setting should be vaccinated as well.

The vaccine is made from an inactivated form of the virus, so the vaccine itself can’t cause Hepatitis. When indicated, children and adults may receive the vaccine as a two-dose series. Adults may also receive a three-dose, combination Hepatitis B and A vaccine series.

So what’s the link to this summer’s events? It’s the route of transmission of Hepatitis A that’s the cause of concern, especially as floodwaters are involved. (Technically, it’s not so much that flood waters themselves are a risk factor, but more that flood waters overwhelm sewage treatment plants or saturate water tables where septic tanks are used. The resultant backup is tainted with wastes, which may be contaminated by Hepatitis A.) You can imagine that in the wake of the floods, there was a strong demand for vaccine to “prevent” Hepatitis A.

Until recently, post-exposure prophylaxis against Hepatitis A was difficult. It involved not only beginning the potentially exposed person on the vaccine series, but also giving a dose of Hepatitis A immune globulin (essentially a shot of antibodies). Both were to be started immediately and certainly within two weeks after exposure. So in order to comply with this protocol, first you would need to locate a large supply of the products (a tough task in its own right), get them to the worksite, track down everyone who was potentially exposed and get the potentially exposed to commit to the appropriate follow-up plan.

Fortunately, the ACIP changed its recommendations on post-exposure prophylaxis in June. Now, it suggests either a single dose of vaccine or immunoglobulin be given as soon as possible (except in some limited circumstances — such as very young children, or those who are immunocompromised or with liver disease — where the immunoglobulin is preferred). For all others, the vaccine is preferred for ease of administration and the possibility of long-term protection. Needless to say, once the vaccine series has been started, it makes sense to finish it over time.

One other thing to know is that no outbreak of Hepatitis A after exposure to floodwaters has ever been reported to the CDC. The same is true among health-care workers, including EMS crews, especially if the use of universal precautions is in play (as it should be in all circumstances).

Even a congressional aide could figure that out.