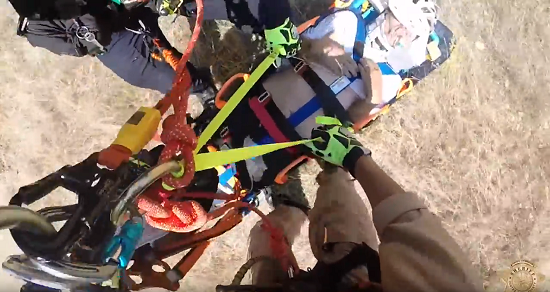 The East Bay Regional Park Police and State Parks Police found the injured bicyclist near Castle Rock in Mount Diablo state park. The bicyclist was in and out of consciousness, suffering from several injuries, and complaining of back pain. The location of the victim was several miles away from any maintained road accessible to ground medical transport vehicles.

The Fire Captain Paramedic and TFO were short-hauled to the location where they secured the victim to a stretcher. The victim was then taken to a waiting ambulance about three miles from the scene. He was taken to a local hospital for treatment. As of Tuesday, he was still in the hospital with a head injury.

Also on Sunday STARR 1 was involved in two other incidents on Mount Diablo. In one case, STARR 1 located the victim and guided in State Parks personnel; in the other, STARR 1 landed and the TFO provided first aid to the victim until paramedics arrived.