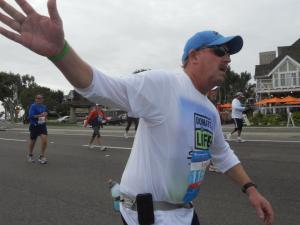 Whole Lotta Heart
In January, EMS veteran Bryon Moore was honored as one of the 2012 Tri-City Medical Center Carlsbad (Calif.) Marathon and Half Heroes. A 2010 heart transplant recipient, he ran the half marathon with five other heart recipients to raise awareness about the importance of organ donations.

Moore has served as a firefighter and paramedic since 1979 and is an EMS industry sales and marketing representative for several manufacturers. He was struck by a virus in 2009 that resulted in daily episodes of ventricular tachycardia. The condition became terminal and required a heart transplant. He received his new heart at Sharp Memorial Hospital in San Diego in April 2010. Just 14 short months later, he was in training, committed to run the Carlsbad half marathon.

“EMS providers need to become more aware of the critical role they can play when attempting to resuscitate patients, particularly young, healthy trauma victims that might not be able to be resuscitated due to a severe brain injury, but who might be a registered organ donor who could offer new life and opportunity to a dozen or more organ recipients,” says Moore.

We applaud Moore for his incredible determination not only with his personal goal to complete the challenging race, but also for his efforts to share his story with others, who may benefit.

Safe & Secure
With the progression and advancement of prehospital ALS treatment, and the need to maintain security of controlled substances, particularly when crews are away from their fire apparatus, the Mesa (Ariz.) Fire Department implemented a cutting-edge way to not only accomplish those tasks, but also to control the temperature of their medications and controlled substances in their temperature-variant desert environment.

In addition to their ALS kits being secure in a location accessible only to crews via a combination lock, each kit vault, located in a designated compartment of each of the department’s ALS engines and ladder trucks, thermostatically maintains a constant temperature inside the storage area.

Mesa Fire Department paramedic captain Randy Budd conceived and developed the idea for the MediRedi locking/refrigerated drug cabinets installed on all Mesa apparatus. His design has broadened the variety of temperature-sensitive medications carried in the department’s paramedic drug boxes, such as Diltiazem and Succynlcholine.

This allows for the guaranteed efficacy of medications and also allows the department to follow United States Pharmacopeia and U.S. Food & Drug Administration guidelines. The department’s providers have voiced an overwhelmingly positive response to the MediRedi vs. the cumbersome ice chests they used to carry.
Each MediRedi has an electronic lock that’s controlled by a department issued card reader or keypad, which prevents theft while the apparatus is unattended on scene. It also keeps a database of users, which insures accountability within the department.

We applaud Mesa Fire Department for implementing this innovative approach. The MediRedi is manufactured by Budd Medical & Fire Equipment, LLC in Gilbert, Ariz. For more, go to www.mediredi.com.

Canine Care
The Richmond (Va.) Ambulance Authority (RAA) has advanced its prehospital emergency care by including a new patient population–K-9s. Select RAA paramedics attended the K-9 Medic program in February hosted by the Richmond Police Department. The class provides K-9 handlers, paramedics, tactical medics and other support members with the skills needed to prevent and treat injuries and illnesses in working dogs.

Chip Decker, RAA chief executive officer, was delighted to be able to participate in the program. “It’s reassuring to know … we are able to provide life-saving interventions for all the members of our law enforcement team,” he said.

RAA’s training coordinator, Daniel Linkins, and Lieutenant Caitrin Conroy learned how to transfer their existing EMS skills to the K-9 patients during a two-day class that provided hands-on learning through use of cadaver K-9s, trained working dogs and dog manikins.

Safe handling and extrication, assessment, bleeding control and splinting were among the topics covered. We applaud RAA for partnering with law enforcement and thinking of their K-9 counterparts. Furry friends need EMS care too.This article originally appeared in March 2012 JEMS as “Last Word: The Ups & Downs of EMS.”