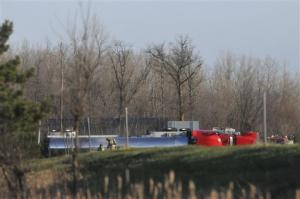 Authorities were on the scene around 5:30 p.m. Sunday when the tanker flipped while trying to avoid the fire truck on northbound I-75 in Saginaw County’s Birch Run Township, about 70 miles northwest of Detroit, state police and fire officials said.

The tanker leaked some acid, the Birch Run Township fire department said, and the driver and firefighters were taken to a hospital for evaluation because they were exposed to the chemical. All were released from the hospital Sunday.

The driver’s injuries were described as minor, and he was cited in the crash, police said.

An area outlet mall and a movie theater were evacuated as a precaution following the crash, MLive.com reports.

Midland-based Dow Chemical Co. said the tanker was carrying acrylic acid from one of its facilities to a plant in Midland, and assisted authorities in the response. Another tanker arrived at the scene Monday morning to transfer the acid, WWJ-AM reported.