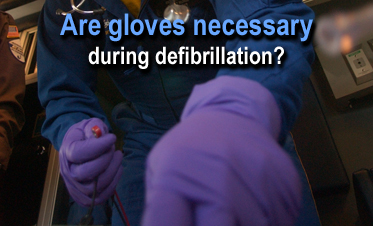 The Science
I’ll attempt to describe this study without getting too technical for fear of being overwhelmed with e-mails from the techies out there. The researchers who were also the subjects of this study volunteered to maintain contact with a sedated patient who was undergoing elective cardioversion. They wore polyethelene medical gloves and simulated chest compressions. Pre-gelled electrodes similar to those used with AEDs were applied to their chests. The amount of stray current that passed through the “rescuer” was measured during biphasic cardioversion, and defibrillation energies ranged from 100 to 360 joules.

In no cases were shocks perceptible to the rescuer. Peak potential differences between the rescuer’s wrist and thigh ranged from 0.28 to 14 V (mean 5.8 +/- 5.8 V). The average leakage current flowing through the rescuer’s body for each phase of the shock waveform was 283 +/- 140 uA (range 18.9 to 907 uA). This was below several recommended safety standards for leakage current.

In the study, the researcher concluded, “Rescuers performing chest compressions during biphasic external defibrillation are exposed to low levels of leakage current. The present findings support the feasibility of uninterrupted chest compressions during shock delivery, which may enhance the efficacy of defibrillation and cardiocerebral resuscitation.”

The Street
Well I’m not sure I’m ready to go that far, but this will probably be one of the most important papers published this year when we look to the future and the 2010 AHA guidelines. But before we go adopting this radical approach, let’s first consider some caveats the authors mention.

What about conduction if the rescuer is not wearing gloves? What’s the difference if you’re still using the older machines with paddles? We have all seen them arc. The authors don’t discuss it, but is there a difference between the conduction with a monophasic machine? I don’t know, but I suspect the answer will be that it’s far less than we feared.

I continue to encounter services with policies that require them to pull over and come to a complete stop on the side of the road to perform defibrillation. Why? I believe this comes from the fear we had when we introduced this unknown device to EMTs in the early 80’s. We said not to touch the patient. Don’t defibrillate on a metal grate, wet ground, in the rain, etc, etc. Why? Because we simply didn’t know. It’s 28 years later, and we haven’t had any significant instances of rescuers harmed while providing care.

Perhaps it’s time to re-evaluate our operational policies in light of science. Defibrillate safely. Perhaps safely is just slowing down and not taking the turn so sharply, instead of coming to a stop where oncoming traffic can hit you. Perhaps, just perhaps, the AED isn’t as dangerous to us as we feared as long as we use it appropriately. And just maybe if this study is repeated in other conditions with other devices, we may be able to keep on pushing while it charges and shocks.