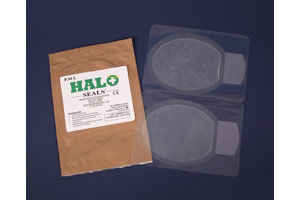 In the pull force test, the HALO Chest Seal was the most stable wound steel dressing adhesive to stainless steel overall. For the 2nd test, the HALO Chest Seal proved to have the most stable adhesion at temperatures of 75°F, 200°F, and -40°F. During the water hold tests it was determined that the Asherman and Bolin will not hold any water due to their valve designs. The Halo Seal was the best performer in this category too. It was capable of holding the water in this fixture for over 13 minutes on a flat surface as well as a curved surface. The 24 hour wear test shows that the Halo Seal is the only product that is capable of being worn for an extended period of time. The pads were worn by 3 different test subjects throughout activities of daily living (work, sleep, light exercise). Each individual reported the approximate time that the patch “fell off” or the percentage of de-lamination that was seen after 24 hours on human skin. And for the 1 hour sweat test, four individuals were selected to wear seals while working out. They started workout and had sweat before placing pads on their apex region, after 1 hour of additional sweating, HALO Seal was the only seal that still remained on all test subjects.

In the end, all this testing led to the conclusion that the HALO Seal is the best chest wound occlusive seal when it comes to heavy perspiration, wet environments, or wearing for extended period of time. It performs under extreme conditions and temperature ranges, from Below 40F, and over 200F.

PMI’s Halo Chest Seal is made with a highly aggressive hydrogel which enables it to conform and adhere to all contours of a patient’s body. It also prevents further contamination of the injury. It’s ideal for the treatment of open pneumothorax and also to prevent the development of a tension pneumothorax resulting from gunshots, stab wounds or other chest injuries.

In addition, many U.S. forces along with Canada, Norway, Sweden and Denmark have recently standardized on the HALO Seal as their occlusive chest seal of choice. HALO chest seal has also been awarded the JEMS 2010 Hot Products Award. For more info go to: /content/jems/en/articles/print/volume-35/issue-6//jems-2010-hot-products.html.