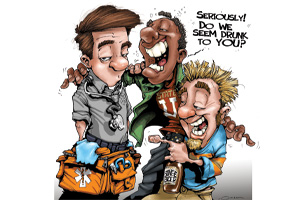 “˜WASTED’ RESOURCES?
In an effort to reduce binge drinking at parties around Dartmouth University, a group of students came up with a plan. They thought it would be beneficial for student EMTs to visit such parties to determine whether an intoxicated person needed medical attention–because apparently this condition is so difficult to identify. We say the friends of the said intoxicated individual should be responsible enough to assess this condition and handle it on their own instead of wasting the valuable time and energy of student EMTs who could be out saving lives.

AED Awareness
More than 200 schools in Denver have installed HeartCase Automated External Defibrillator (AED) cabinets via the American Red Cross’ “Save A Life” program, which aims to install more than 1,000 AEDs throughout the Denver area.

HeartCase AED products, made by HeartStation, were installed at the schools by the Denver American Red Cross and are displayed in noticeable large, red heart-shaped cases and cabinets. Cabinets are designed to begin alerting and summon additional rescuers to a patient’s aid when use of an AED is indicated.

These special AED cabinets are ideal for schools because they’re lightweight and specifically made to guide users through the CPR and defibrillation process, allowing accessibility to any bystander, regardless of training.

We congratulate these schools for taking action by applying for AEDs for their facilities. These schools are paving the way for other cities and school districts to implement similar programs.

The investigation revealed that Evans injected a 13-year-old girl with drugs he stole from Bemidji Ambulance Service while he worked there as an EMT. He also sexually assaulted the victim, and videotaped himself sexually assaulting a second victim.

A district judge ruled that prosecutors can also petition to civilly convict Evans after serving his 24-year sentence. Evans plead guilty after reaching a plea agreement with prosecutors, saying he wouldn’t be prosecuted for other federal and state crimes discovered during the initial investigation. He’s required to register as a predatory offender for the rest of his life.

We give a thumbs down not only the former EMT for his offensive behavior, but also the Bemidji ambulance agency for not uncovering his previous criminal record during the hiring process.

Illegal Maneuver
A TransCare ambulance crew and a police officer were responding to a call for a woman with chest pains in White Plains, N.Y. While they were inside the woman’s apartment, they heard a loud horn honking and then the back-up alarm on their ambulance. According to police reports, the officer on scene even saw Monet Oglesbee, 33, move the ambulance.

Oglesbee was charged with third-degree unauthorized use of a motor vehicle in the incident. After being warned for moving an ambulance that was blocking her car, she was arrested when filing a complaint with the police against the EMS crew and officer at the scene.

When she was confronted by the officer, Oglesbee said she moved the ambulance because she was late for work and needed her car. The officer gave her a warning, informing her that she’s not allowed to drive emergency vehicles. He then returned to the call.

However, when the officer returned to headquarters, he found Oglesbee in the process of filing a complaint against him and the TransCare crew for blocking her car. This time, the officer didn’t hesitate to arrest her.

We chide Oglesbee for being more concerned with a personal inconvenience than the call the EMS crew was responding to–and for her ungrateful attitude toward the officer who originally let her go with a warning. JEMS

This article originally appeared in February 2012 JEMS as “Last Word: The Ups & Downs of EMS.”