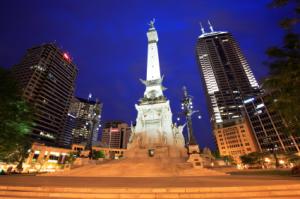 I really thought the well was dry. My column was due, my editor was getting antsy, and all I could come up with was, well, bubkes. I was seriously contemplating throwing in the towel after six years and 55 columns. I know that for some of you out there that would be a blessing–like the guy who commented “I won’t ever get those 15 minutes of my life back” after reading one of my columns.

But then I came to work today on a downtown truck. Now, I don’t think there’s anything special about downtown Indianapolis. I’m sure the downtown of every city welcomes a similar mix of personalities. With the exception of the occasional genuinely sick or injured person from one of the hotels, restaurants or sports venues, most of the day is spent providing taxi services to the homeless shelters, group homes and winos drawn to the city center. The good news is the average transport time is a couple of minutes. The other good news is the entertainment value, and thus fodder for this column, downtown provides.

I knew my job was not yet done as I was walking down the hallway of one of the big downtown hospitals to make up the cot after dropping off a patient, a regular who fell out at the Shell station a couple of blocks from the station. She wasn’t a regular for me because I rarely work this truck, but the engine on scene told us they run on her a couple of times a week. She suffers from seizures, pseudo-seizures and anxiety attacks, all of which are apparently indistinguishable. Recently, she has been adding chest pain to her seizures. Of course she didn’t want to go to one of the two downtown hospitals because “they don’t do anything for me.” Instead, she wanted to be taken six miles away to new territory. When she realized she would have no way home from the suburbs, she decided to be taken to the hospital three blocks away.

Sorry, I got off track. So after dropping her off I was wheeling the cot down the corridor when my eyes beheld a remarkable sight–something I don’t believe I had seen before during the almost three decades I have been doing this job. Another crew was in the hall waiting for a room assignment. Their patient was a skinny, tweaky young white guy in his teens dressed in full hip hop regalia, including snap back and droopy shorts. But what was remarkable about this fella was his, well, his, um, pose I guess you’d call it. His arms were akimbo, his hands held at 90-degree angles to his wrists, his fingers rigid, pointing straight out from his hips. First time I ever saw a conscious, alert and oriented patient with decerebrate posturing. The medic standing with him was trying to get him stop hyperventilating. He wasn’t cooperating, so she suggested he control his breathing by singing. We were then treated to a most remarkable rendition of the Star Spangled Banner, right there in the hospital hallway.

The other medic came around the corner with the room assignment. He paused to allow the completion of the national anthem; I’m not sure whether he placed his hand on his heart. They began walking their patient down the hall to his room. His arms still rigid and hands sticking straight out, he raised his arms to shoulder level, looking down at the floor. “Please don’t fly away” the medic pleaded.

So now I know, if I ever start to run out of material, I take a shift downtown.