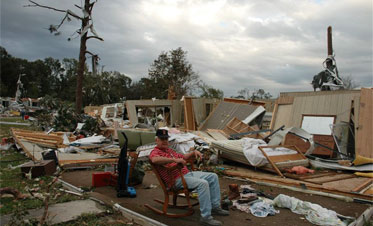 The National Association of State EMS Officials (NASEMSO) has sent a position statement and letter to the Federal Emergency Management Agency (FEMA) asking officials to address their concerns on two issues related to the FEMA contract for ambulances during a national disaster. NASEMSO Executive Director Elizabeth Armstrong also discussed the paper in a Feb. 2 meeting with officials from the Department of Homeland Security_s Office of Intergovernmental Programs.”ž

American Medical Response (AMR) currently holds the”žcontract to supply 300 ground ambulances, 25 air ambulances and paratransit vehicles to carry 3,500 individuals for each of two FEMA regions (the Gulf Coast or Atlantic Coast). “If both zones are activated, as happened in”ž2008, we provide a maximum of 600 ground ambulances, 50 air ambulances and 7,000 paratransit seats,” said Steve Delahousey, AMR vice president for emergency preparedness. “There’s also a provision to respond to the rest of the contiguous states, with terms to be negotiated at the time of deployment.” FEMA awarded that contract to AMR in August 2007, and it includes the potential for extensions through July 2012.”ž

To that end, NASEMSO asked FEMA to:

“The risk is very real that a state/territory will unknowingly provide more resources in response to an EMAC request than it can spare,” the NASEMSO paper said. “This scenario actually occurred during the 2008 hurricane season when both federal and state/territorial EMS assets were deployed simultaneously to southern states in anticipation of Hurricane Gustav. àš Hurricane Hanna subsequently moved up the eastern seaboard with local assets already too far away to be recalled.”

But Delahousey said, “For Hurricane Hanna, the federal government never had to ask us to release ambulances that had been deployed to the Gulf Coast for Hurricane Gustav to go back to the states that were in jeopardy. We took that initiative ourselves and authorized release of all the ambulances services from Florida to Maine.”

He insists AMR has created a robust network with plenty of resources for the event of simultaneous deployments to Atlantic and Gulf Coast states.

“We have asked AMR for a couple of years to let us know who has contracted with them within our states,” said Pennsylvania EMS Director Joe Schmider, who chairs the NASEMSO Domestic Preparedness Committee and wrote the position paper with NASEMSO President Steve Blessing (Delaware’s EMS director) and NASEMSO Program Advisor Leslee Stein-Spencer (a former Illinois EMS director).”ž

“We are working with [AMR] to open a better line of communication, and I am optimistic this information will be forthcoming,” Blessing said. “As far as I can tell, the communication between AMR and individual states has not yet made it to the level either organization has hoped for, but we are confident that we can work together with AMR to improve in this area.”

Schmider said, “AMR is great at the meetings, but we_re still not getting that information. But it may be that AMR doesn_t know what it_s allowed to say.””ž

According to Delahousey, thatispart of the problem. “States have brought this up to FEMA and [the Department of Health and Human Services], and the reply from the federal government [has been] that the federal government doesn’t regulate whether the [subcontracted] providers need to inform the states,” he said. “If the state EMS office wants to require that, it’s up to them. In fact, [because] this is a federal contract, there_s some question about whether it’s even appropriate for us to inform entities other than the federal government and the contracted providers about the specifics of a federal deployment.””ž

Delahousey said both AMR and the federal government “have gone out of the way” to ensure EMS state resources aren_t depleted during a deployment. AMR has signed up approximately 150 ambulance services as network subcontractors, including private companies, fire departments and volunteer agencies.

Steve Murphy, AMR’s executive vice president of government and national services, said, “We have clarified several different ways with network providers that they need to not have obligated their resources to another response, and we encourage them to maintain an open communication with state regulators at the time of deployment. But we can’t require them to do that.” He added that AMR is “routinely in communication with state and local officials” whenever the contract is activated.

“When an activation occurs, we have an incredible amount of work to do in a short period of time to get a tremendous amount of resources in place within 24 hours,” Murphy said.

AMR drafted its own position paper in response to NASEMSO concerns about local impact. The paper notes that AMR and FEMA are “aware of this concern and we have both taken steps to ensure it doesn’t occur.” For example, the FEMA request for proposals clearly stipulates that the contractor cannot use resources within the affected states and must refrain from subcontracting with ambulance service providers committed under EMAC agreements.

Delahousey said, “These federal deployments are infrequent, so it doesn’t make sense for a local EMS provider to jeopardize their day-to-day operations in their local jurisdiction in favor of responding to a federal disaster that may happen once every 10 years.”

The NASEMSO document recognizes and appreciates the fact that FEMA now prohibits AMR from contracting with ambulance services committed under EMAC agreements. However, the association contends that, because all states and territories have now signed on to EMAC, “this new stipulation does not reach far enough” if the federal contractor doesn’t coordinate deployment efforts with the state or territorial EMS office.

To further address this concern, AMR said its solicitation letter and contracts with network providers state: “We recognize that many EMS providers are regulated by local or state agencies and may have restrictions when it comes to responding to out-of-area disasters. The EMS needs of your local communities are primary, and participating in our provider network is not intended to undermine those obligations.”

“We won’t tolerate depleting local resources,” Delahousey said. “When we request an ambulance service to respond, they must sign an agreement attesting that they will not violate any state or EMAC regulations that may jeopardize local EMS.”

According to the NASEMSO paper, during the Hurricane Katrina response and the 2008 hurricane season, some “EMS services delayed their response to an EMAC request as they weighed financial options between the EMAC request and the [FEMA ambulance] contract in order to obtain the highest rate of reimbursement.”

“EMAC rates are set by each state, but the FEMA contract negotiates rate amounts with the contractor and we don’t know what those rates are,” Schmider said.

Delahousey said he was not aware of any situations where an ambulance service delayed responding to an EMAC request while awaiting deployment by AMR — or vice versa. He noted that no federal ambulance contract existed when Hurricane Katrina hit in 2005 “and, unfortunately, some patients perished when evacuation resources were unavailable.” Since FEMA created the ambulance contract, he said, “all patients who needed evacuation during federally declared disasters were indeed evacuated.” In 2007 and 2008, AMR twice mounted the largest mobilizations of EMS resources in U.S. history, sending ambulances from more than 200 locations in 41 states to respond to Hurricane Gustav alone past summer.

“We’ve expressed our desire to be collaborative, both to our network and to NASEMSO, but we must take our direction from the federal government,” Murphy said.

Schmider said his group isn_t against the contract or EMAC, but wants to know what_s going on. “The right hand needs to know what the left hand is doing, especially in times of disaster,” he said.

NASEMSO Meets with DHS
When Armstrong met with DHS officials Feb. 2, she also discussed two other NASEMSO concerns: that “federal support for EMS is lacking and homeland security funds are not reaching EMS agencies” and that “national credentialing for EMS providers is not established.” NASEMSO also told DHS that EMS needs appropriate personal protective equipment for all EMTs, National Incident Management System training for all EMS responders, equipment upgrades to ensure interoperable communications, exercises coordinating EMS with other agencies and inclusion of state/territorial EMS officials in federal planning and training.”ž

“We were impressed by the attention they gave us,” Armstrong said after the meeting. She said NASEMSO provided copies of their position paper on the national ambulance contract on the Friday before the meeting. “They obviously worked on it over the weekend, because by Monday morning when we met, they had marked it up and highlighted it and had lots of good questions for us. We had the impression DHS is really listening.”

Two weeks after the meeting, Blessing said, “We have not yet received a formal response [from FEMA]. With the change in leadership at the federal level, this is not a surprise, and we hope to engage FEMA again on this issue in the near future.””ž