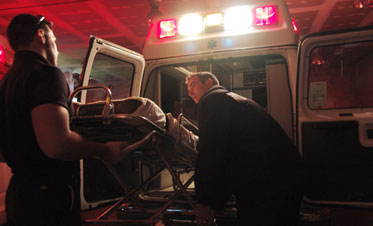 Somehow I think even Mike Rowe of Discovery Channel’s “Dirty Jobs” would shudder if asked to do some of the things we have to do. Take this call, for example. There’s no doubt in my mind Sigmund would’ve had a lot to say about the psychic meanings hereunto appertaining. As for me, I just wanted to survive.

We were called — again — to 2751 Peanut Brittle Road. Sounds nice, doesn’t it? Well, for some reason it had attracted every reprobate, ne’er-do-well, rake and rapscallion in the county. And there were few more rapscallious than Mike and Joan.

The rumors about Mike and Joan were legion. He was an ex-Marine/Special Forces/CIA guy who worked on various secret technical projects for the government. But when he retired, he spiraled down the vortex of drugs and alcohol, assisted by his co-dependent mate Joan. Joan was purported to be an ex-hooker/dancer/dealer/madam who hooked up with Mike and led him down the path to wantonness. In addition to being druggies, it was rumored Mike had stashed various firearms around the house. Approach was always made with circumspection.

I really can’t remember what that day’s dispatch was for — something silly, I think. As we pulled up, we were informed there were no sheriff’s deputies available, so we parked down the driveway and sidled up to the front door as invisibly as we possibly could. I knocked on the door, and it creaked open. We were welcomed by a putrid whoosh of air fragranced with more than a hint of human offal. After choking back that which must be choked back, we called out to Mike. No answer. Gingerly, we pushed the door open and peered inside, swinging our gazes like a periscope sweeping the horizon for enemy smokestacks.

We called for Mike and heard a response from the back of the house. We crept alongside the walls, the malodorous cloud intensifying into what seemed to be an almost physical barrier of putrefaction. Choking back our own bile, we saw Mike standing in his bedroom, rummaging around piles of filthy clothes on the floor. And here’s where the call took a turn for the worse.

Mike had spackled himself with his own refuse. Well, spackled is probably too delicate a verb. Plastered would be better, or pasted or smeared. And not just a little bit either, but all over, head to foot. Why, Mike, why? Mysterious are the ways of man.

“Mike, are you OK?” I asked, feeling ridiculous even as the words came out of my mouth.

“Yeah,” Mike answered. “Just a little dizzy.” We asked him if he could walk to the living room. “Sure,” he answered. We retreated before him, walking backward like frightened campers faced with a grizzly bear.

“Sit on the couch Mike, we’ll be right back.” Mike sat down. We exited the front door. We had been breathing through our mouth until this time. Unfortunately, that first nose breath after mouth breathing in a fetid atmosphere introduces into the olfactory tract the aromas remaining from the last breath. We doubled over, stumbled to the truck and pulled out our personal protective equipment. I would have preferred a Class A suit, but all we had was Tyvek, goggles and masks.

We grabbed every blanket and towel on the rig, piled them on the cot and lurched unwillingly back into the miasma. We laid several blankets out and had Mike lie on top of them. We then papoosed him in the blankets and layered more blankets over him. We babushkad his head in towels, leaving only an opening for his eyes, nose and mouth. Thankfully, he was cooperative.

We wheeled Mike out to the back of the rig and loaded him inside. Then came that moment every EMT knows, when both partners pause at the back step, hoping desperately for their partner to climb in. Neither of us moved. Finally, I pulled the Paramedic Prerogative; “Harvey, it’s a BLS run.” I’m pretty sure I heard an expletive uttered before my name. But sometimes, no matter how smarmy, a guy’s gotta do what a guy’s gotta do.

Now, if Harvey had been on his game he should have said something like, “Guy, I think he may be short of breath, or maybe his behavior is a result of hypoxia secondary to cardiovascular compromise or CVA. In any case, I really don’t feel comfortable teching this call.” Luckily, he wasn’t thinking fast enough on his feet (probably woozy from the aromatics) as I guided his backside into the truck and closed the door as fast as I could.

It was an interesting trip to the hospital; all windows open and exhaust fan screeching. I was surprised Harvey and Mike survived the ride without losing consciousness, given the amount of deodorant spray Harvey spritzed in the back of the squad. And I don’t remember exactly how I phrased my radio report, but I do recall the combination of fury and horror on the nurses’ faces as we rolled into the ED. We moved Mike onto the hospital gurney just as one of the nurses started to say, “Fellas, can you help?”

I bent my head over to the speaker mike on my epaulette, looked at my partner, and proclaimed, “Harvey, gotta scoot, got another run. Sorry Carla, gotta go. “

Disclaimer:The following are not recognized as words in standard references of the written English language. They have been left in the text over the vigorous objections of this publication’s editors, upholders of linguistic purity: “repscallious,” “papoosed” “babushkad” “gotta” and “teching”. Surprisingly, “spritzed” and “fella” have entered the realm of Standard English (though not my spell-checker), for which I am grateful.