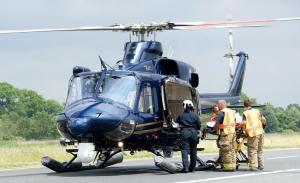 NEWARK, N.J. – The Federal Aviation Administration proposed stricter flight rules for helicopters Thursday, including many to increase safety for medical helicopters after a recent spike in fatal accidents.

Among the proposed regulations is a requirement that all air ambulance helicopters be equipped with an electronic system that warns of terrain or other obstacles.

John Allen, FAA director of flight standards, said operators had installed or were considering installing the Helicopter Terrain Awareness and Warning Systems (HTAWS) in about 40 percent of the air ambulance helicopters as of last year.

“Now, with the regulations, they’re going to have to do more than think about it,” he said.

Since then, a crash in Arkansas in August killed a pilot, flight nurse and flight paramedic, and last September the three-member crew of a medical helicopter perished in a crash on the South Carolina coast.

Another proposed FAA regulation would establish stricter weather limitations for medical helicopter pilots flying under visual flight rules, or without the aid of navigational instruments. Currently, they are governed by those rules only when they are transporting a patient, Allen said.

Pilots commanding medical helicopters also would have to be certified to fly using instruments.

All commercial helicopter pilots would have to undergo periodic training on how to handle sudden changes in weather that could create conditions normally requiring instrument flying.

“Pilots who aren’t used to this will lose control of the aircraft in seconds,” Allen said.

Medical helicopter operators also would be required to conduct a preflight risk analysis, train on-board medical personnel in safety measures and adhere to rest requirements and flight time limitations for flight crews operating with medical personnel on board.

The FAA estimated the cost of the proposal at $136 million for air ambulance operators and $89 million for other commercial operators.

The public will have a 90-day period ending in early January to weigh in on the proposals.