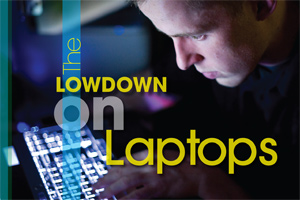 Today, as EMS agencies strive to collect, store and share data during and after prehospital care missions, it’s an industry standard to have one or more laptop computers in an EMS vehicle. Due to the financial commitment required for mobile computing projects, choosing the right laptop will be one of the most important decisions an EMS agency makes. The criteria used to select laptops for your agency should be determined by your business processes. Before you choose one, ask yourself the following questions:

Many agencies are also using laptops as mobile data terminals to receive dispatch data, including emergency medical dispatches and premises hazard information, or for in-vehicle mapping with a GPS interface.
Ruggedized laptops, the best choice for ambulance use, are built specifically for the most severe environmental conditions. U.S. Department of Defense (DOD) and public safety agencies have demanded more durable devices for these environmental challenges. DOD has an established standard–MIL-STD610G–that ruggedized laptops are tested against to determine whether they’ll withstand the hostile environmental conditions they’re likely to encounter during field use.

Ultimate Protection
Here’s a little-known fact about many ruggedized laptops: They’re resistant to extreme conditions when they’re closed but vulnerable to unexpected damage when left unattended. Our EMS system uses a fully ruggedized laptop that seldom sustains any major damage when it’s closed. But we’ve replaced several screens, because the laptop was left open and fell approximately five feet onto a concrete floor.

We’ve also had several laptops fall off the rear bumper of the ambulance. Some were lucky enough to narrowly avoid traffic and therefore sustained only minor, cosmetic damage, but some not-so-lucky laptops were made into Michelin-to-asphalt sandwiches.

The laptop you select should have the ability to support the security levels your agency requires. If you’re saving any confidential or HIPAA-protected data locally, you may need full-disk encryption software. It will need sufficient memory to handle the processes you plan to use concurrently and adequate hard-drive storage space to accommodate the programs and data you’ll need to support. Also, don’t forget to allow some capacity for expansion.

Most manufacturers include a three-year warranty, and some offer an extended warranty that covers five years. A three-year warranty should be part of your purchase, and it should include replacement or repair of all standard parts. Read the warranty carefully to ensure your needs are covered. Three years sounds short now, but it can feel like an eternity if your touch screen or hard drive malfunctions.

Bells & Whistles
There are a lot of features to consider when you purchase your laptop: drive size, memory, screen, ports and operating systems. First, let’s discuss the most basic component of the computer–the hard drive.
Drive: One of the most recent improvements in laptops is solid state drives (SSDs), instead of the more common hard (mechanical) drives. This feature is currently optional and typically increases the initial cost, but SSDs are more stable in a mobile environment because they contain fewer moving parts. If you’ve ever had a hard drive crash and lost local data, you’ll appreciate this upgrade. Most ruggedized laptops offer at least a 1.6 MHz Intel processor with a 160 GB hard drive and 4 GB RAM. I would accept no less.

Screen: Touch screens have become standard for ease of navigation, signature capture and biometrics. Most ruggedized laptop manufacturers are providing screens with improved viewing capabilities. For mobile applications, we depend on screens with the utmost clarity in bright sunlight conditions. Computer display brightness is measured by nits, and typical touch screen displays range from 4—1,000 nits. The wider the nit range, the clearer the display.

If your computer will be used in the cab of a vehicle (e.g., for navigation), be sure that the computer or the software you plan to use includes day and night modes. Using a display intended for brightness in daylight will be distracting or dangerous in the cab at night.

Ports: Standard inputs and outputs include universal serial bus (USB) ports, which are available in versions 1.0, 2.0 and 3.0. Most devices are now compatible with each version. Due to the versatility of USB, your laptop needs at least three USB ports–but the more the better. Although it’s outdated, most laptops still include a “Firewire” or IEEE 1394 port, but it’s probably not necessary unless one of your specific applications calls for it.

CD/DVD drives aren’t necessary either, as most installs can be performed by flash drive. These drives are difficult to secure, and the agency should consider whether it will be acceptable for employees to watch movies or play games on these computers before including them in the agency specs. Battery ratings and power supplies, another critical element, should be compared to other manufacturers for charge time and battery lifespan.

Operating System: A Windows operating system (OS) is standard. Windows 7 is now available and should be your first choice due to the versatility this system has demonstrated thus far. Most vendors provide a choice of OS, and you should ask them to demonstrate the advantages and disadvantages. But, be careful. Although IT specialists may be comfortable with non-Microsoft OS, most of what you’ll attach to your laptops will be compatible with only Microsoft.

If you’re planning to use Internet access to send patient care records over the Web, or to use other wireless applications, connectivity options should include both Bluetooth and Wi-Fi capabilities. Make sure that your wireless options have strong security levels, such as theWPA-2 Wi-Fi standard, which offers encryption for up to 128 bits and 802.11 bgor n. If the laptop has less encryption capability than that, your information security staff or HIPAA compliance officers will be uncomfortable.

If you’re choosing a laptop to serve as a vehicle-mounted mobile data terminal, you’ll discover that most laptop manufacturers aren’t in the vehicle mount or docking station business. Beware of “universal docking stations” because they don’t exist despite being advertised as such. Choosing the best mount and docking station depends on your vehicle, laptop choice and how you plan to provide a power supply and peripherals.

The information I’ve shared is from experience and market research. If you’re embarking on the laptop procurement journey, ask the vendor to provide a device for your staff to test drive. Also, ask your prospective vendors for contact information of other agencies using the laptops and ask about all the topics we’ve covered. JEMS

This article originally appeared in July 2010 JEMS as “The Dirt on Laptops: How to get a rugged computer that fits your needs”