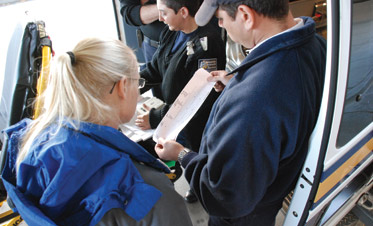 You and your EMT partner respond to a call for a 43-year-old male complaining of chest pain.”žYour 12-lead ECG shows Q waves and negative T waves in leads II and III, and aVF.”žYou interpret these changes as being possibly associated with inferior wall myocardial ischemia”žand transmit the ECG to the emergency department (ED). However, the cardiology team”žat the hospital determines your patient is not having an AMI.

After a second look, you realize that, although Q waves and inverted T waves are present,”žthere_s no ST-segment elevation of one or more millimeters in two or more contiguous leads.”žYou were caught by a mimic. You re-check the leads and find a lead reversal.”žAfter you replace the patches, a repeat ECG shows normal sinus rhythm.

While following up on the case, you learn the patient_s lab studies at the hospital”žrevealed no elevation of cardiac-specific enzymes and your patient was discharged”žwithin two hours of presentation to the ED with musculoskeletal pain.”žYour medical director wants to meet with you.

The 12-lead ECG has become an exceptional prehospital tool in the detection and treatment of life-threatening arrhythmias and cardiac-associated complaints. When performed correctly, the 12-lead ECG provides a more in-depth view than the traditional three-lead ECG. Technology has advanced, and 12-lead ECG data can now be transmitted to receiving facilities to improve recognition and treatment of”žcardiac-related emergencies in a timely manner consistent with evidence-based practice guidelines.”ž

Lead misplacement, however, can cause misinterpretation of ST changes, electrical axis, location of bundle branch blocks and location of infarct. Although lead misplacement isn_t a common mistake among well-trained EMTs and paramedics, and no significant costs to an agency are associated with reapplying patches, it could cause the wrong diagnosis and delay proper treatment. Worse, it could cause a provider to initiate treatment from inaccurate ECG data that could be detrimental to the patient.”ž

It_s estimated that 4% of all ECGs run are recorded with incorrect lead placements; estimates are even higher for ECGs recorded in areas that necessitate a higher level of care, such as the prehospital environment.1

The Recorded Cardiac Cycle
In 1924, a Nobel Prize was awarded to Willem Einthoven for his development of the first practical electrocardiogram (ECG). Einthoven initially used a magnet, which was connected to limb leads, to produce a scrolling record of the heart_s electrical activity. As his work advanced, he went on to describe the conduction of the cardiac electrical cycle as we know it today, with the naming of the various components of the ECG (P wave, QRS complex and T wave).2,3″ž

The heart_s electrical conduction cycle begins with the sinoatrial (SA) node, which is often referred to as the central pacemaker. As the SA node discharges, an upward or positive deflection, known as the P wave, is created on the ECG. While this occurs, depolarization of the atria happens, producing contraction of the atria and forcing blood flow down into the ventricles.”ž

Correct Lead Placement
To obtain a 12-lead ECG, a total of 10 electrodes are used. Six precordial chest leads (V1àV6) are placed on the anterior chest at predetermined, anatomically referenced landmarks.”ž

To place the precordial chest leads, it_s best to begin with V1, which is placed at the fourth intercostal space on the right sternal border. Given that V1 is the starting point for placing all the precordial leads, it_s important to ensure this lead is properly placed.”ž

The four remaining leads to be placed are the limb leads (LA, LL, RA and RL). The limb leads require less precision in placement. The arm limb leads can be attached anywhere on the arms, as long as they_re not touching the thorax. It_s best to place the leg leads on the medial aspect of the calves or upper thighs. Avoid placement of leads over bony prominences as it may cause unnecessary artifact.”ž

If the P wave has a positive deflection and the QRS wave remains positive, the problem isn_t a lead wire reversal, but an abnormal axis deviation resulting from underlying pathology or dextrocardia.4″ž

When precordial leads are misplaced, the cause is often specific lead placement on the chest wall rather than misplacement of the actual lead wires. One study that looked at accuracy of chest lead placement found V1 and V2 to be superiorly misplaced 50% of the time.4 When V1 and V2 are superiorly misplaced, poor R-wave progression can occur. R-wave progression can be characterized by the R wave becoming more prominent and the S wave becoming smaller or less prominent in leads V1àV4. Poor R-wave progression can result from the following conditions: left ventricular hypertrophy, right ventricular hypertrophy, obstructive pulmonary disease, anterior or anteroseptal infarction, conduction defects (such as a left bundle branch block) and cardiomyopathy.6″ž

Precordial chest lead placement can also be hampered in obese patients and women with large, pendulous breasts. In these patients, special attention must be given to placing the leads at the correct anatomical landmarks.4″ž

Catching & Preventing Mistakes
Being able to recognize lead misplacement errors can reduce erroneous decision-making and therapy initiations.1 Providers should be intimately familiar with the normal presentation of lead groups and the varying baseline morphology that each presents. Having this information will enable a provider to make comparisons to an ECG reading in which they suspect a lead misplacement has occurred.”ž

Require at least yearly training and review sessions that include 12-lead ECG placement and interpretation. Also, conduct training whenever your ECG manufacturer issues changes in technology or design.

Task one provider per call with applying leads and lead wires. This single assignment and responsibility reduces the chance of misplacement and lead wires connected to the wrong terminal.

Consider forming a utilization group to provide feedback on ECGs obtained in the field. If your service transmits 12-lead ECGs to facilities to activate cardiac teams for emergency cardiac treatment, this group should include experts from those facilities.

Conclusion
The utilization of 12-lead ECGs in the prehospital setting has been shown effective in detecting life-threatening arrhythmias, as well as identifying acute coronary conditions requiring immediate prehospital intervention or definitive care in a cardiac catheterization lab.7 Because many systems apply 12-lead ECGs early in most medical calls in order to rule out cardiac problems first, providers must be aware that improperly placed leads can misguide patient care and lead to inappropriate treatment and potentially unnecessary allocation of health-care resources.8″ž

EMS personnel must always keep in mind that even with a normal ECG, a patient still may be having an MI. Therefore, signs and symptoms and medical history should support your treatment plan. Technology enables us to diagnose and treat a wide variety of illnesses and injuries, but it can only perform as well as the provider operating the equipment.

Wayne A. Riddle, RN, MSN, CFRN, PHRN, has been involved in EMS for more than 10 years, as both a flight nurse with PennSTAR flight, Hospital of the”žUniversity of”žPennsylvania,”žPhiladelphia, and as a firefighter/PHRN with the Berwyn Fire Company,”žBerwyn,”žPa. Contact him atwayneriddlern@comcast.net.