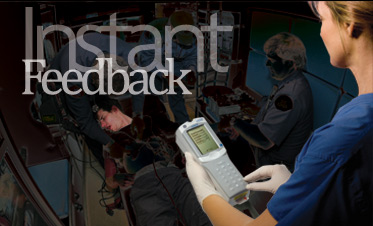 This clinical review feature article is presented in conjunction with the Department of Emergency Medicine Education at the University of Texas Southwestern Medical Center, Dallas.

Cardiac markers:Enzymes and other substances released into the blood stream when cell walls from damaged heart muscle break down. The marker levels, which can be detected in blood samples, may take two to 24 hours to increase in the blood.”ž

Hematocrit:A measure of the packed cell volume of red cells expressed as a percentage of the total blood volume.“ž

Hyperkalemia:Higher than normal concentrations of potassium in the blood.

Obtundation:A reduction in consciousness short of comatose, but which requires a strong stimulus for arousal.

Point-of-care (POC) testing:Analysis of clinical specimens at the patient bedside rather than in a laboratory.

Sine wave:An ECG finding that occurs when potassium levels are extremely elevated. This distinct ECG wave form change shows further widening of the QRS complex and its eventual blending into the T wave; once present, death from ventricular fibrillation and/or asystole is typically imminent.

In 1955, an awake but pale patient believed to be bleeding out from a peptic ulcer was seen at a small rural hospital. Blood was available at the closest university hospital, but it was one hour away by car. Would a”žhematocrithave helped in making the decision to transfer?

In 1972, an ambulance was called for an unconscious patient. He was apparently intoxicated and had urinated on himself. Was it alcohol, a seizure or something else?

In 2000, a paramedic had just intubated a comatose, apneic patient. Was the tube in the trachea? Was the patient salvageable?

EMS providers have been using point-of-care (POC) testing since World War II, and probably before, seeing patients like these and many others on a daily basis. They assess vital signs and utilize pulse oximetry, capnometry and ECGs to gather hard data on a patient’s condition. But is that all the information EMS providers can gather to help them make treatment decisions?”ž

On arrival at the emergency department (ED), multiple tests are immediately ordered, including various blood tests. What if some of these blood tests could be performed in the field? Would it make a difference in patient care and outcome? The answer is yes.

Bedside testing has been used in intensive care units for many years and is now finding its way into the EMS arena. Blood is drawn and placed in a device-specific test cartridge, such as the Abbott i-STAT.

Depending on the specific tests to be run, the analyses usually take only two to 10 minutes to produce results. Treatment is immediate, precise and ongoing; monitoring is minute-to-minute rather than hour-to-hour. Consider the role of POC testing in the following modern-day cases.

Case #1
EMS responds to a woman who has fallen. The crew finds an 80-year-old patient with a decreased level of response to verbal and tactile stimulus. She’s lying on her tiled kitchen floor and is incontinent of urine. It’s not clear how long she’s been down.

This patient may be suffering from hypothermia, a crush injury and/or dehydration after being on the cool floor, possibly for days. Her ECG tracing shows a slow, wide-based regular rhythm, interpreted as ventricular tachycardia. Her BP is 70/50 mm/Hg, pulse is 60 bpm, respirations are 8/min and she responds only to deep pain. She’s obviously unstable and needs immediate treatment. Should she be cardioverted? Enter POC testing.

Analysis of her blood shows a dangerously high potassium level. Therefore, the ECG finding is now interpreted as a sine wave due to hyperkalemia. Immediate chemical treatment with calcium, sodium bicarbonate, IV fluids and possibly albuterol are indicated. If the decision had been defibrillation or cardioversion, the patient would likely have ended up in a full cardiac arrest due to intractable asystole.

Case #2
A 56-year-old premenopausal female reports having an intermittent “funny” feeling in her right arm and neck for the past four days. She has called 9-1-1 because her discomfort has become continuous as of four hours ago. Your exam reveals normal vital signs, a normal 12-lead ECG without ST-segment elevation or depression, and a normal blood sugar reading. The patient feels reassured by your examination and decides to stay home. Is this a safe decision?

You do a blood test for cardiac troponin I, which gives a strong positive result, indicating she_s having, or has had, a very recent non-ST-segment elevation myocardial infarction (N-STEMI) with resulting muscle death. You administer aspirin and start an IV while transporting directly to the cardiac catherization lab for a percutaneous coronary artery intervention.

Case #3
An elderly male on Coumadin for atrial fibrillation has fallen numerous times in the past week. His wife called 9-1-1 because she was unable to wake him this morning. On examination, he’s noted to have a small hematoma over the right temporal scalp and numerous old and new bruises on his extremities. He withdraws symmetrically from pain and has garbled speech but is otherwise in his normal state of health from known prior examinations. Is transfer to the hospital routine or emergent?

The patient’s vital signs are normal except the neurological findings of obtundation and confusion. He’s on a number of medications with cardiac and neurologic consequences. But his POC prothrombin testing gives an international normalized ratio (INR) of 10, indicating the potential for active intracranial hemorrhage. He’s emergently transported for neurosurgical care and reversal of his anticoagulation.

Next Generation POC
We’re all familiar with glucometers and capnometric devices that have proven efficacy, but many newer POC testing products exist. These devices fall into two general categories. Quantitative devices are normally electronic instruments that measure the quantity of whatever substance is being tested for in a blood sample (e.g., an electronic glucometer shows blood sugar in mg/dL). Qualitative devices, such as the Triage MeterPro Meter from Biosite, usually come with chemical-treated paper that changes color to indicate the presence of the specific substance being tested for (e.g., a colormetric CO detector).

Also, many cardiac marker tests can be done in the field, including cardiac troponin I, B-type Natriuretic Peptide (BNP), Creatine Kinase-MB (CK-MB), myoglobin and heart-type fatty acid binding protein (H-FABP). These are the same markers used in hospitals for the diagnosis of acute myocardial infarctions and heart failure. With these tests, providers have more information to make critical decisions that can save lives benefits

These new tests also allow for simplification of the blood-handling process because they limit the number of tubes and the amount of blood drawn. This reduces the amount of time spent collecting multiple samples and minimizes the potential contamination of the health-care provider by bodily substance contact.

Additionally, delivering the results in a printed or electronic format has the potential to reduce miscommunications or errors in the transmission of critical information. Results can be printed or downloaded directly to the patient care report.

Depending on the reporting system used and the medical environment the prehospital providers interface with, these reports give further legitimacy to the prehospital care rendered because the test results can end up in the patient’s medical record.

Expanded POC testing allows EMS providers to make better patient assessments and provide more specific treatments after obtaining history and doing the physical examination. In some instances, these tests may be the only other information available besides the physical examination, especially when dealing with confused, obtunded or comatose patients with no other historian present.

Implementation
When establishing a POC testing program, an EMS agency must meet various federal, state and local requirements. Training on the indications for testing, sample collection and the handling of blood is mandatory. Understanding and interpretation of test results is necessary in order to justify the testing. After establishing a POC testing program, additional training helps give field providers a sense of increased familiarity with the tests being performed.

ED staff support for the POC program is also important to its acceptance. Demonstrating to the ED that POC testing by EMS will help their efficiency and increase their throughput can go a long way in gaining program support.

Accuracy and dependability of results are key to maintaining program validity with the hospitals and their professional staffs as well as with the FDA. Annual training in FDA compliance and a strong QA program benefit both the EMS system being evaluated and receiving health-care facilities.

Summary
By using POC testing, EMS providers can triage patients more accurately and ensure they’re being transported to the appropriate hospitals for definitive care. It also allows the EMS provider to give earlier and more accurate therapy for complex prehospital medical illnesses and injuries, as well as intoxication.

Cost, accuracy, convenience, consistency, reproducibility and need are the key elements necessary to justify implementation of and support for a POC testing program. Once such a program is in place, better patient care and assistance to EDs in moving patients through the health-care system more quickly and efficiently are the dividends to be gained. JEMS

Deems Okamoto, MD, FACEP, is an emergency department physician in Seattle. He has been a contributing author of the American Heart Association ACLS-EP course section on electrolyte emergencies and toxicology since its inception in 1996.

Paul Berlin, NREMT-P, MS, is the medical division chief of Gig Harbor Fire & Medic One in Washington and has been utilizing POC testing (Abbott i-Stat device) for several years. He has been a contributing author of the American Heart Association ACLS-EP course section on environmental emergencies and acute coronary syndromes since its inception in 1996. Contact him at pberlin@piercefire.org.

For more on the latest in EMS care visitjems.com/eagles2009