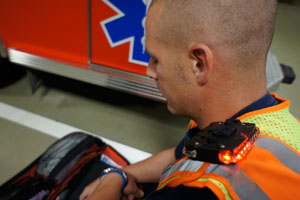 Founded in 2010 and headquartered in Mount Pleasant, Wis., 425 Inc. is a personal safety device company.  Its Guardian Angelâ„¢ product line represents the industry’s first small, wearable lighted device designed to improve personal safety — both in the workplace and out.

In 2008, Milwaukee police officer and company co-founder Kevin Matte was at a concert with his wife when a fight broke out in the middle of the crowded arena.  First responders arrived promptly, but quickly became entangled in the chaos and were unable to establish their presence through voice commands alone.  Their repeated attempts to break through the crowd and gain visibility to allow for back up support to reach them became the catalyst for the solution that then took shape in the form of the company’s first product line: the Guardian Angel.

With the initial goal of providing police officers with the same official visibility on their person as they have in their squad cars, the Guardian Angel is a small (5.2 oz.), wearable lighted device, designed to be worn on the shoulder epaulette of an officer’s uniform.  Since introducing the concept to local Wisconsin-area police departments and garnering significant positive feedback, 425 Inc. recognized the same need existed within the greater emergency responder market, and extended its initial product offering to include military, firefighters, EMS, security and other first responders, offering wider ranges of light color options to emulate the official lights of its users.

With the latest LED technology, the Guardian Angel provides visibility from more than one mile away, from above, and from a nearly 360-degree radius around the wearer.

In addition, the Guardian Angel product line provides the following features and benefits for users: