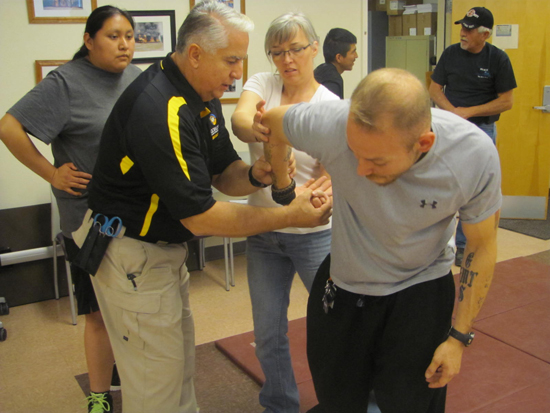 Members of the McKinley County Volunteer Fire District in northwest New Mexico underwent a day-long training on April 26 at their training center to understand not only the causes of erratic patient behavior, but, more importantly, how to protect themselves when the patient becomes physically aggressive.

The program, recently launched by Global One Defense Solutions of Albuquerque, N.M., is finding much welcome acceptance among EMS personnel in the region.

Ken Hoffman, the director of EMS for McKinley County, vividly remembers early in his career getting punched in the face by a patient who then pulled a gun from his pants and pointed it at the stunned EMT.

Hoffman escaped harm and the patient, who was eventually arrested for armed robbery, but the harrowing incident is reflective of the dangers encountered with increasing frequency by local volunteer and paid emergency workers. 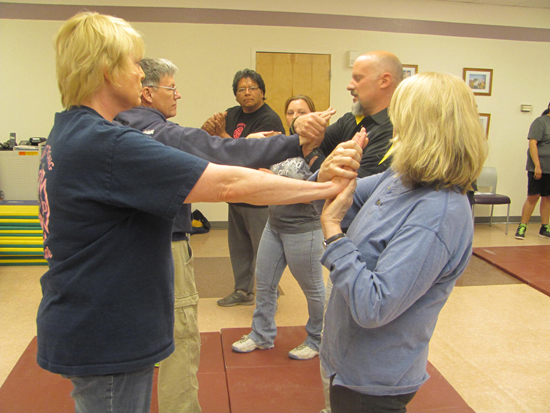 There’s been a startling increase in attacks by patients on the 300 plus volunteer firefighters who provide much needed emergency services throughout McKinley County, putting them at risk for serious injury.

Janet Butler, a volunteer with the Vanderwagon (N.M.) Volunteer Fire Department, recalls arriving at a scene she was told was safe when an individual, who was involved in a battery incident, returned wielding a pipe.

“The sheriff deputies were there by then, but it was still scary to think we were told it was safe to go in,” Butler said.

According to a study by San Diego’s Loma Linda University School of Medicine, 61% of EMS personnel questioned
experienced assaults, with 37% requiring medical attention.

Despite these numbers, the actual number of attacks against EMS workers is unclear largely due to the fact they often aren’t reported and are sometimes shrugged off as business as usual. One EMT said he was bitten and punched, but neglected to report it.

“I’m sick of this and something needs to be done,” Cotes said.

One approach officials hope can allay some of the concerns surrounding combative patients is specific self-defense training, which is dismally lacking from state training guidelines.

Hoffman said the state doesn’t provide specific protocols on how a combative patient should be restrained or how to even get the patient into a position to be restrained.

“The only guideline from the state is that the restraints have to be “˜soft,'” Hoffman said. This leaves much to the imagination of the EMT, putting them at further physical and legal risk.

And the attacks continue in a region where substance and alcohol abuse is rife, and there’s a lack of mental health resources.

Joy Woolman, a nurse and wife of county fire marshal Bill Woolman, recalled an emergency call where a teenage girl covered in blood experienced a psychotic breakdown in the back of her ambulance.

“It was scary, and we don’t have the training to deal with these incidents,” Woolman said.

The staff of Global One Defense Solutions, led by Gil Baca, a retired New Mexico State Police commander and martial arts expert, taught the class of 21 volunteers how to effectively protect themselves from a combative patient while attempting to protect the patient from further injury.

The full-day class included real-life situations such as a combative patient standing, sitting and laying in the back of a confined ambulance. The instruction emphasized how to avoid confrontation, escape from the grasp of a patient and effectively subdue a combative patient.

“This kind of training is very important with the increase in violence we are seeing, especially when there is delayed backup,” Hoffman said. “The instruction team relayed important information for our personal security.”

Butler said she saw two benefits to the training. “These were techniques we could utilize in both our professional and private lives,” she said.