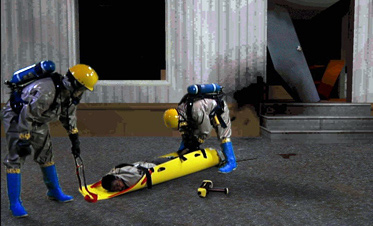 Several video games out there offer more than high-tech fun. They offer”žEMS providers training on real-life scenarios, such as terrorism and hazmat emergencies.

Djordjevich worked one on one with Jim Morrissey, disaster coordinator for”žAlameda”žCounty’s”žEMS, on”ž”Ground Truth” (which is officially named”ž”Game Technology-Enhanced Simulation for Homeland Security”). They developed scenarios together; then she wrote the game, and they took it to a wider audience for critique. This is the first game in a three-year research project.

“This is clearly a great tool for the entire first responder community. While instructor based trainings and field exercises are critical in the development of rescue skills, this computer based gaming model makes it accessible for spontaneous use during down time,””žMorrissey said.”ž”The multi-discipline aspect of Ground Truth helps emergency responders to appreciate the intricacies of a multi-agency response to a catastrophic event.”

“Ground Truth” is one more program in a growing group of virtual learning programs targeting the first responder community. The game, which resembles”ž”The Sims,” begins with a newscast report showing a two-vehicle crash.”ž”Players are told right off the bat that it’s chlorine, and there’s an accident,” said Djordjevich, a hobby video gamer. Then, she adds, it’s up to players to realize there’s a toxic leak, which requires a hazmat response to the scene.

“The player has to identify which are the hazard areas with chlorine, and go from there,” she said.

Players are led through the scenario and given instructions on how to deploy hazmat teams. Once this is done, the mission focuses on how to maximize the number of lives saved, which is accomplished by deploying police officers to manage traffic, telling neighbors to go to a shelter and ensuring firefighters are in place.

“I think it’s another way of training [on] the material they need to know,” Djordjevich said.”ž”This is learner-focused versus teacher-focused. When you’re playing the game, you always need to think of the end user.”

Hazmat Training Any Time, Any Place

Affordable, instant and credible training is now at the fingertips of first responders nationwide.

Dartmouth”žCollege’s Interactive Media Laboratory has developed”ž”Ops-Plus for WMD Hazmat,” a video game training program for”žEMS, fire and law enforcement responders. Ops-Plus, which teaches responders about hazmat preparedness and response and then tests their skills in a virtual world, is the first program the lab has developed for the first responder audience.

At the start of each session, JEMS founder James O. Page orients the user to the”žVirtual”žTerrorism”žResponse”žAcademy.”ž”He believed the EMS community needed this training, and is the first person”žEMS personnel see when log in,” said Elliott.

Users must pass a 20-question test on need-to-learn basics — such as CBRNE and risk management — to access the simulations. The Simulation Area is a three-dimensional space where responders deal with hazmat situations by selecting the appropriate PPE and instruments for the task at hand. It includes accurate, real-life photos of equipment and scenarios and is led by well-known hazmat trainer Greg Noll. Following any simulation, users continue to a debriefing and discussion on the lesson’s objectives.

Thousands of departments are using the program as an instructor-led group training activity.”ž”This tends to be very successful, easing people into the interactive training,” Elliott said.”ž”Once familiarization takes place, responders can use it independently.”

Because Ops-Plus is used by a diverse group of providers, it offers an introduction for users not familiar with video games. The training can also completed in small increments.”ž”The time demands on the first responder community are great, and we understand that,” said Elliott.”ž”This gets people prepared for the hands-on training, by exposing them to the principles, and it can be done anytime, day or night.”

Ops-Plus, which was funded by the U.S. Department of Homeland Security, is available at the”žNational Fire Protection Association Web site.