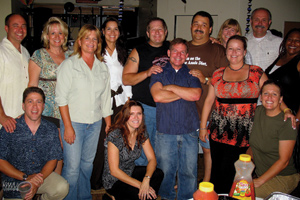 Most people in EMS have at least one attribute in common: if nothing else, they’re nice. But there are things that set some of us apart from the rest. Have you noticed? Some are so talented, so experienced and so competent, and they love what they do so much, it seems natural for us to pattern ourselves after them.

In the mechanical trades, people who generally serve as models are called masters. If you want to become an electrician or a diesel mechanic, you complete a trade school curriculum, then you become an apprentice. As an apprentice, you work for two to four years under the supervision of a journeyman or a master, and you become a journeyman. You work as a journeyman for, say, 20 years, develop a fine reputation and create a piece of work a group of master craftsmen judges as a masterpiece. If they say you’re a master, you’re a master.

That hierarchy is still fairly formal in Europe, especially in Germany and the United Kingdom, where it has evolved from an ancient guild system. In Germany, in order to become a master, or meister, you must also complete written and practical exams that can take as long as a week. (Some professions also have grand masters, or grosmeisters.) Here in the U.S., plumbers, electricians, carpenters, masons and mechanics all observe this progression to master-level status. In academia, it’s the origin of what we call a master’s degree. A Navy master diver is highly respected and is authorized even in civilian life to append the suffix MDV to his or her name.

What do you think, Life-Saver? Is EMS a craft? Is there such a thing as a run that might be called a masterpiece? I’ve definitely seen some, and I think there are people who perform routinely at the master level. As long as ambulances don’t have trailer hitches, we will continue to handle every call with limited amounts of equipment and be challenged to produce good outcomes from awful circumstances. Some of us will even create beautiful outcomes. (That would be called art, right?)

I think the reason why our work, done beautifully, isn’t widely regarded as mastery (or art) is that so few people, watching a master at work, understand what they’re actually seeing.
I attended a debriefing after a disaster drill in my little town less than a day before writing this article. A government official, critiquing the drill as an outside “expert,” referred to the medic crews as “ambulance drivers.” He thought he was saying that everyone had performed very well. But, by his use of that term, he demonstrated to at least half the participants (especially the highly experienced medics) that he was just another clueless bozo.

See, we’re the experts in our craft. If we designate somebody a master, and their medical director couldn’t care less about it, who’s to say they’re not?

Plenty of directors brag about their systems being “the best.” But in the same breath, many of those folks will tell you they can’t afford master paramedics. They’ll say they can pay for two new medics, fresh out of school, for the cost of one 20-year medic. That may be true, and it may be of interest in a spreadsheet with no columns for incidents, collisions, complaints, scope violations, response times, protocol errors, brake and tire wear, fuel consumption, employee turnover or lost and damaged equipment. Such a spreadsheet would fit neatly on a piece of letter paper. But it would never support a budget.

Think about it. A single incident requires immediate leadership attention, disrupts the schedules of busy people and requires hours or days of research and documentation. (That’s if it doesn’t lead to litigation.) Those are all real costs that no budget writer can forecast and no leader can hide. And, incidents almost always leave the public with an aftertaste that remains for years.

When someone I love deeply has their big one, I hope I’m nice to whoever responds. I hope I treat them with respect and remember to thank them for their hard work. But I have to tell you, in my quietest moments, I hope they’re professional caregivers. Masters.

This article originally appeared in November 2010 JEMS as “Mastery: Is EMS an art form?”