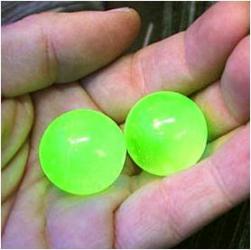 Teenagers often seek unusual, risky products to get high, and the Internet is an easy, under-regulated source of potentially dangerous products, such as home GHB kits and instructions on making/obtaining illicit drugs and poisons. EMS is likely to become involved in sentinel cases, often with little warning. Tapping into trusted sources of information on changing trends and new threats to health can provide insights into and allow protection from such emerging threats.

Case
A 16-year-old male purchased glass products advertised on the Internet as uranium-doped marbles that were purported to glow under black light and remain iridescent in normal lighting. The marbles had been broken in transit; shards of the glass were intermixed with a yellow substance. The parents contacted our poison information center.

The family was told not to touch or inhale the product and instructed to cover the box with a towel, secure and leave the room until the materials could be evaluated. United Nuclear was contacted; according to the company, the products contained 3% uranium 238 (U238) and should have a reading of 600 counts per minute using the Geiger counter. Although deemed a low risk, the Radiation Emergency Assist Center Training Site (REAC TS) was contacted. REAC TS agreed with our poison control center assessment that 3% U238 was low risk but hazmat should still be sent to the site to confirm the risk level.

On site, hazmat confirmed the United Nuclear information. The Geiger counter detected radiation at a reading of 600 counts per minute. The area was cleaned up without aerosolizing the contents. None of the involved parties have suffered from radiation toxicity. No one who was exposed is expected to develop toxicity.

Uranium
Uranium is a naturally occurring radioactive substance. (1—5) Natural uranium is comprised of the following isotopes: U234, U235 and U238; the latter is the most commonly found in nature and is considered “unenriched” or weakly radioactive. (1—5) The radiation emitted from low-percentage U238 doesn’t travel far from the source and is considered low risk because skin is an effective barrier (5—9). However, ingestion, inhalation or insertion into the skin will bypass this barrier. The introduction of U238 into the body is a health and radiation risk. (6) The most radioactive forms are U234 and U235, which are utilized for weapons and reactors.

People ingest one to two micrograms of uranium every day in food; root veggies, such as beets or potatoes, have larger uranium content but still a very low, non-toxic dose. It’s estimated that there are 1.5 micrograms in every liter of water.

Testing of patients exposed to radioactive materials, including uranium, varies depending on the clinical situation and threat assessment. Weapons or reactor grade uranium and its radioactive byproducts can cause cancer, immunosuppression and acute radiation sickness. (1,2,6)

Urinalysis can demonstrate exposure qualitatively, one week or longer depending upon dose. Uranium can be toxic to the kidneys, and, in large enough doses and depending on the exposure, it can cause acute radiation syndrome. Given this was considered a low dose, short duration and thus low health risk exposure, neither acute nor follow up testing were deemed necessary. Long-term exposure to radioactive materials is associated with cancer. However, no human cancer has been reported as a result of casual exposure to natural uranium (1,2).

Radioactivity
When a person is exposed to radiation, energy is deposited in the body. The amount of this energy deposited per unit of weight is called the “absorbed dose,” represented by the term “RAD” (radiation absorbed dose). The Rad is the basic unit of measuring exposure dose defined as the deposition of 0.01 joules of energy into one kilogram of tissue. The SI unit of measure is the gray (Gy); 1 Gy = 100 Rad. (6—8)

Knowing the number of Rads a patient has been subjected to allows the clinician to anticipate the potential severity of acute radiation syndrome and to plan clinical management accordingly. The risk that a person will suffer adverse health effects from radiation is measured using the unit Rem (roentgen equivalent man). The Rem quantifies the amount of damage suspected from a radiation exposure. The SI unit is the Sievert (Sv): 1 Sv = 100 Rem. The Rem is adjusted to reflect the type of radiation absorbed and the likely damage produced. Rads and Rem are often used interchangeably. There are some notable exceptions beyond the scope of this case.

Radioactivity is a naturally occurring phenomenon; we are exposed on a daily basis. The average background radiation exposure a person faces in the U.S. every year is 360 mRem; 1 mRem = 1000th of a Rem, most of which is natural. (6,7)

Uranium is an alpha, beta and gamma emitter, and is more dense than lead. (1) Alpha particles can be stopped by clothing and intact skin (1,6—8). Beta particles have a spectrum of energy levels; high-energy beta particles are capable of penetrating a few meters in the air and millimeters into tissue. Severe beta burns are possible on skin or eyes upon contact. Beta particles, like alpha particles, pose a significant internal hazard. Aluminum or thick plastic protection with hospital protective clothing is necessary to prevent beta injury. It’s important to make certain before an event that the hospital radiation detectors can identify beta emission. (1,6—8) Gamma and X-rays consist of electromagnetic radiation and are high-energy uncharged particles, which readily pass through matter, including skin and clothing, resulting in total body exposure, posing a significant risk to health. Lead, concrete and uranium are used as shielding, including lead aprons. (6—8)

Discussion
In this article, we report the first case involving uranium marbles purchased on the Internet. A Google search in September and October 2008 revealed numerous sites for uranium-doped marbles as well, as other radioactive items, such as Chinese radioactive gas mantles. Significant potential for trafficking dangerous items through the Internet remains. Fortunately, the uranium-doped marbles in this case posed a low health risk, especially if not ingested, inhaled or injected.

Radiation — whether oncology, toxicology or terrorism preparedness — remains among the least discussed or taught topics in medical school. Results of a recent JEMS poll revealed that more than 80% of respondents (EMS agencies/individuals) were not prepared to handle a radiation emergency, such as a “dirty bomb.” (8) Fortunately poison control centers, hazmat and REAC TS are expert resources available for communities and should provide updates and advisories on radiation preparedness and new threats, as well as assist with response plans and training.
Special appreciation to:
D.M. Luboweicki, RN, CSPI – Certified Specialist Poison Information LI Regional Poison Center, Winthrop University Hospital; &