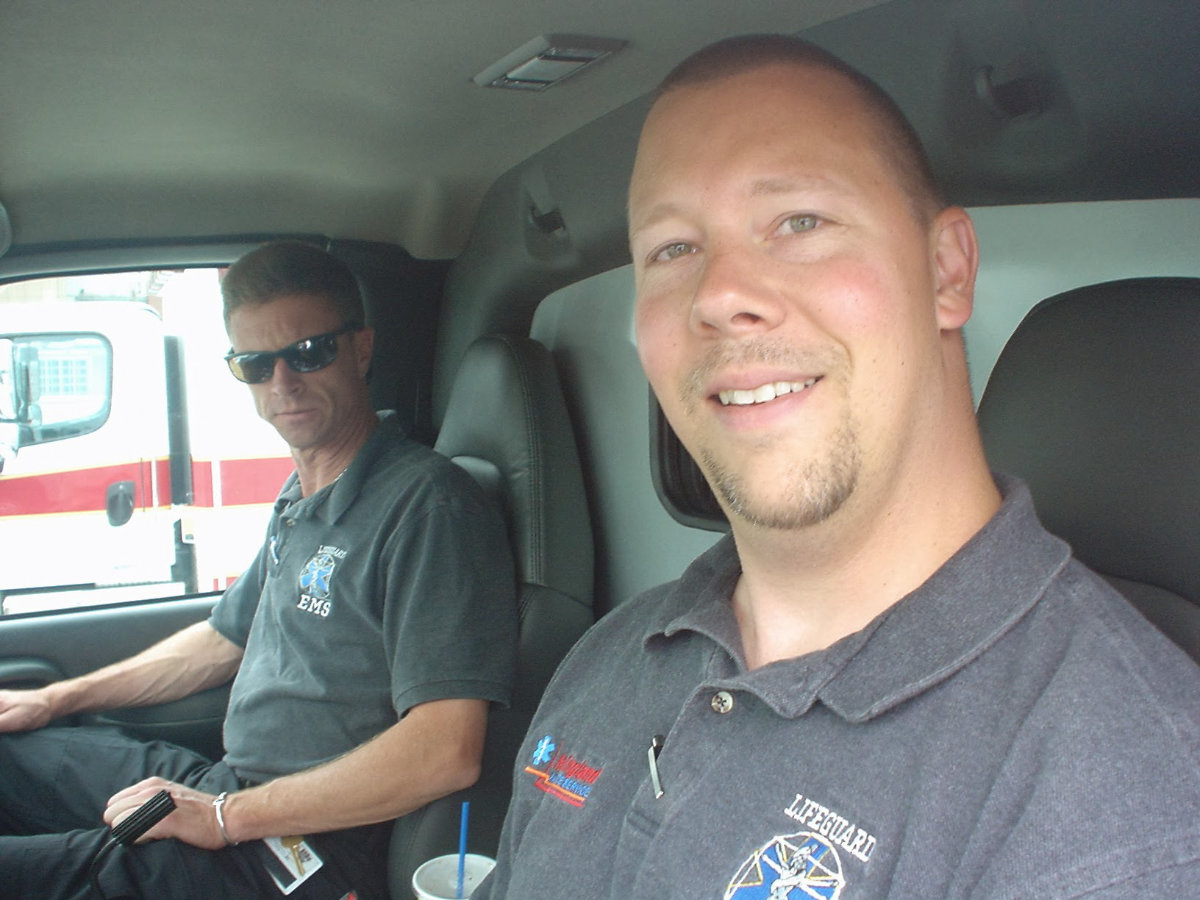 Scott died on November 26, 2013. Scott was an exceptional ambulance driver. Yes, he was also a highly skilled paramedic with a passion for critical care ventilator management, a loving father and husband, and a very funny guy. But I want to talk about Scott the ambulance driver.

I know, being called an ambulance driver triggers a hypertensive crisis for some of us. Long ago, in some places, the person who drove the ambulance was called, well, “an ambulance driver.” It was a job. It was a different job than caring for patients in the back of the ambulance. But, today, in most places the two jobs have merged. However, that’s not the case in most air medical ambulances.

The pilot (helicopter or airplane ambulance driver) is a highly trained and respected member of the team, purposefully isolated from patient care in most programs. In my experience, they’re a pretty humble bunch who don’t mind saying, “I just fly it,” when asked about their role on the team. I’m not suggesting that we go back to designated ambulance drivers who don’t have any medical training. I’m suggesting that we embrace ambulance driving as another important part of our EMS careers. Scott did.

Today’s EMTs and paramedics (and I’m using those terms to refer to every licensed EMS professional until we come up with something better) have lots of training, access to a wide range of patient treatment options, operate complex medical equipment, document on computers, and communicate using interoperable 800 MHz trunked radios. But what about driving?

According to a recent research study of ambulance operations, only 31 of 50 states require even a basic Emergency Vehicle Operator Course (EVOC) for ambulance drivers.1 The National Registry of EMTs (NREMT) cognitive and psychomotor examinations don’t include driving an ambulance. Most states don’t require a driver’s license in order to obtain an EMS license, and in most states, only a valid passenger car driver’s license is required to drive an ambulance.2 Some states have a special endorsement for ambulance drivers, but few if any require a commercial driver’s license, even for the largest of ambulances.

There are about 18 ambulance crashes daily in the United States, injuring 10 people daily and killing two people monthly. These figures don’t include injuries and deaths of paramedics responding in personal vehicles to emergency scenes or ambulance bases.1

A 2003 study using data from the National Highway Traffic Safety Administration (NHTSA) Fatality Analysis Reporting System (FARS) looked at ambulance crashes during the 1991—2000 period and found 300 fatal crashes involving ambulance during the study period, killing 82 occupants in ambulances and 275 occupants of other vehicles. The editorial note accompanying that report estimates the EMS personnel fatality rate in the United States at twice the national average.3

A study of Australian paramedic injuries and fatalities from 2000—2010 found that paramedics had the highest fatality rate of any occupation in Australia, and an injury rate twice as high as police officers.  Fatalities were largely transportation-related–collisions or being hit by vehicles while working at scenes.4

The risk of death or injury from an ambulance crash certainly deserves our attention, but what about legal risk? After all, in many EMS encounters the patient is a stranger in a stressful situation with high expectations crafted by years of watching the miracles of television EMS. However, patient care isn’t the biggest legal risk for paramedics. Driving is.5

He drove carefully, swiftly but smoothly, and was focused on driving when that was his role. He used lights and sirens sparingly, but effectively when necessary. He stopped and looked for crossing traffic at red lights and blind intersections. He knew that the emergency lights don’t produce a force field that protects the ambulance. He knew the story about a ladder truck and an ambulance approaching the same blind intersection at right angles, both with lights on and sirens blaring. And he didn’t drive like his lights and sirens were on when they weren’t.

Other drivers don’t know that we’re responding to an emergency–a real time-sensitive emergency–unless we tell them. We don’t tell them by tailgating. Scott knew that lights and sirens are a treatment, a treatment reserved for situations where they’re indicated, a treatment that may save some time, but one that increases the risk of crashing the ambulance.6

So, how can we learn to drive like Scott? Here are three suggestions:

The 2015 Ambulance Operations team from the National Association of EMS State Officials (NASEMSO) identified 49 best practice considerations related to ambulance driving, with categories including defensive driving, communications, and training.1Review them and incorporate them into your career.

Avoid distractions when driving. Drive ahead of the ambulance, anticipating the actions of other drivers and avoid collisions through adequate space and use of predictable maneuvers and options.

Frank Borman, commander of Apollo 8, is quoted as having said, “A superior pilot uses superior judgment to avoid situations which require use of superior skill.” Drive like that pilot. Seek good training and repeat it regularly.

Learn about your vehicle. How does it handle in an emergency stop or swerve? On a slippery hill? Be familiar with local roads, traffic patterns and routes.

Don’t drive when you’re too tired. Fatigue is associated with many EMS crashes.7

Make driving another thing you are excellent at, just like patient care.

2) Limit lights and siren use.

Heed the data. Discuss situations where lights and siren are indicated, and where they are not. Given that they don’t save much time and they increase crash risk, lights and siren should be used as a treatment and applied only when indicated, and not when contraindicated. Do we splint every leg?  Then why treat every patient with lights and sirens? Rush hour traffic going nowhere? Maybe lights and sirens are indicated during an emergency response. Routine transport of a stable patient? Nope, not indicated. Two blocks from an urban hospital with blind intersections? How many other ambulances are converging, all believing they have the right of way? Be extra careful in situations where multiple emergency vehicles are operating and implement a “cone of silence” near the hospital to avoid collisions.

3) Include driving in safety and quality assurance programs.

When is the last time you were involved in a driving quality review? Who is that partner whose driving is so erratic that you get nauseated riding with them? And who is your Scott, the partner who gets you to the scene or hospital quickly, smoothly, and safely?

Work within your safety and quality programs to help everyone become a Scott. Discuss driving styles, equipment and minimizing distractions. Gather data like audits of lights and siren use, time intervals, and from feedback surveys measuring driving improvement. Consider installing “black boxes” to provide feedback on speed, G force and other driving behaviors. Consider video monitoring to document your careful driving, and what the other guy was doing.

This article focuses only on driving, but there are many other safety factors to consider in ambulance transport, such as seat belt use, ambulance design, and restraint of equipment, stretcher and patient.  Together with driving, many other factors can improve your service, the care of your patients, and get you home safely at the end of your shift.

4. Chalmers L. (Sept. 15, 2014.) Paramedics have the riskiest job in the country with highest fatality rate and twice the injuries of police. The Courier-Mail. Retrieved Nov. 26, 2018, from www.couriermail.com.au/news/queensland/paramedics-have-the-riskiest-job-in-the-country-with-highest-fatality-rate-and-twice-the-injuries-of-police/news-story/ffca3ee76647ed6b96c6ce3125b00587.

6.  Kupas DF. (May 2017.) Lights and siren use by emergency medical services (EMS): Above all do no harm. National Highway Traffic Safety Administration Office of EMS. Retrieved Nov. 26, 2018, from www.ems.gov/pdf/Lights_and_Sirens_Use_by_EMS_May_2017.pdf.

Paramedic Class Has Gone to the Dogs