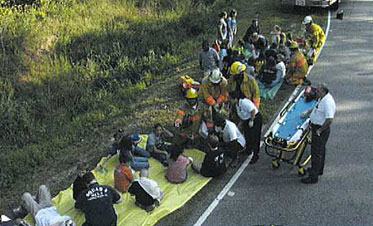 It was midnight. and I had just finished my regular, eight-hour paramedic shift in Lorain, Ohio. I was about halfway through my 20-minute drive home when I heard a distant thud to the south, toward Elyria. When I looked in the direction of the sound, I saw a glow reflecting off the clouds in the distance. I couldn’t figure out it was but whatever it was, it wasn’t good. The EMS service I worked for covered both the cities of Lorain and Elyria, so I took the next left turn and headed toward the glow.

Within two minutes the tones started going off in succession. There had been an explosion at the Aztec Chemical Pant, inconveniently located in the middle of a city of about 50,000 people. This was a time before cell phones were every pocket, and I didn’t want to interfere with priority traffic by talking on the radio. Of course, one of the most important rules to remember as a first responder (and the one most easily forgotten in the excitement of the moment) is don’t make things worse!

As I drove toward the scene I looked for flags or smoke to check the wind direction. I was in luck. I was upwind. When I got into town I could hear from the radio traffic — fire and medical incident command were up and running. I called dispatch when I heard a lull in radio traffic and was directed to come to the central station.

When I arrived several other off-duty personnel were already there, huddled in dispatch. We were to await assignments. More than enough folks were at the scene of the explosion. After about an hour, we were sent to various schools where shelters were being set up by the American Red Cross. Although officials hadn’t identified the chemicals released, there were reports of respiratory distress and the fire department had decided to evacuate a sector of the city downwind of the incident.

My partner and I took a squad and reported to one of the designated schools. We were dumbstruck by what we found when we arrived. Red Cross volunteers were calmly and efficiently setting things up. They had already designated areas for decontamination, canteen, families and intake. They had set up water coolers, chairs and cots, and they were bringing in food. All of this and the explosion had occurred less than two hours before! Most volunteers were seniors, and they operated in a calm, friendly and professional manner. There was much to learn from them.

We were asked to set up a medical station to evaluate people who weren’t feeling well. We had some nonspecific respiratory complaints, and only one patient was transported to the hospital — probably more in emotional than respiratory distress. The chemical released was eventually reported to be a mild respiratory irritant, and the explosion was an accident caused by a worker. He was the only one to die in the blast. By morning, everyone was allowed to return home.

It doesn’t matter what the cause of a mass casualty incident is — accident, terrorism or criminal violence. The principles remain the same. First responders must respond quickly. But more importantly, first responders must respond wisely, calmly and efficiently. The greatest service we can perform at a disorganized scene is to create order out of chaos, calm out of calamity. We must slow down, breath slowly and deeply, and lower our voices. Tunnel-vision is our worst enemy. We must force ourselves to look around, in all directions and dimensions, and with all our senses. This does not come naturally. To be good in a crisis, we must train and train and train, and when the time comes, we must do as we’ve trained.