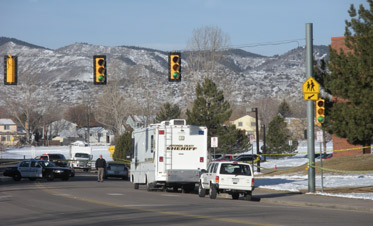 It was a frightening scene that brought back vivid memories of the1999 Columbine High School shooting tragedy and again left the community in shock and disbelief. The scene was very chaotic, with television helicopters buzzing overhead, flashing emergency lights racing to the scene and students running for their lives after a lone gunman opened fire just as school was ending for the day. Deer Creek Middle School, is just outside the city limits of Littleton, Colo., in unincorporated Jefferson County. It’s just a few short miles away from Columbine High School.”ž

The incident happened at 3 p.m. on Tuesday, Feb. 23, when 32-year-old Brunco Strong Eagle Eastwood allegedly began firing at students with a bolt-action .30-06 hunting rifle as busses filled the pick-up lanes and parents waited for their children. The alleged gunman, described as a drifter with a history of mental illness, walked up and asked a group of children whether they were students at Deer Creek. He allegedly opened fire when they answered “yes.” Eastwood, reported by his father to be hearing voices in his head, had a lengthy arrest record that included incidents of threatening others with a gun. Denver news station9Newsreported that Eastwood attended Deer Creek Middle School in 1992.”ž

This day could have been much worse had it not been for the heroic acts of Dr. David Benke, a 57-year-old math teacher who rushed the shooter and took him down, according to published reports. Patrolling the parking lot Benke heard the initial gunshot and quickly moved toward the disturbance. He encountered the alleged gunman as he was reloading the rifle and quickly wrestled the gun away from him just as a second shot rang out. Benke subdued Eastwood and with the help of others held him down until Jefferson County Sheriff officers could arrive just minutes later. Two students were injured by the gun fire, one critically, and both were transported to Littleton Adventist Hospital by West Metro Fire Rescue. Benke was very humble in his heroic role and said he wished he could have done more before any of his students got hurt. A Facebook page called “Dr. David Benke Is A Hero!!!!” was quickly developed and now has more than 34,000 members.”ž

Jefferson County School districts officials have been training for such a situation for the 10 years since Columbine. The staff had practiced this drill many times and did exactly what they were supposed to do. School safety protocols include quickly notifying law enforcement, evacuating the schools and notifying parents.”ž

Wayne M. Zygowicz,BA, EMT-P,is the EMS chief for Littleton (Colo.) Fire Rescue. He has been involved in EMS and the fire service for 25 years. He also serves as a member of the JEMS Editorial Board. Contact him atwzygowicz@littletongov.org.“ž “ž