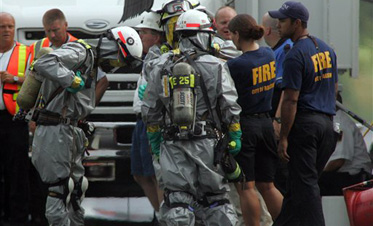 GARNER, N.C. — Authorities say they have found a third body inside a Slim Jim factory in North Carolina a day after an explosion wrecked the building.

Garner Police Sgt. Chris Clayton said crews found the remains of a missing worker Wednesday morning. He said teams were preparing to enter the facility through the roof as part of recovery efforts.

The worker was the only person unaccounted for after the blast. Two people died, including the only victim so far identified by police. The body of 43-year-old Barbara McLean Spears of Dunn was retrieved Tuesday night before searchers suspended work because heavy rains threatened to collapse the unstable structure.

Officials said 300 workers were in the plant when the blast occurred and 38 employees were injured.

Previous Story
GARNER, N.C. — Crews in protective suits headed back into a collapsed Slim Jim factory through the roof Wednesday in an effort to reach a second body and find a missing worker after an unexplained blast ripped through the plant.

Authorities identified one of the victims of the Tuesday explosion as Barbara McLean Spears, 43, of Dunn. Her brother, Anthony McLean, 38, told The Associated Press that Spears had worked at the ConAgra Foods Inc. plant in Garner for about 15 years, most recently in the cutting department.

“I knew she was a victim when I went to ConAgra and she didn’t get off the bus,” McLean said. “I knew something was wrong with my sister at that time. No one could tell us what hospital she was in or anything.” McLean, of Ocala, Fla., was visiting family in Dunn, about 30 miles south of Garner.

Search and rescue chief Frank McLaurin said enough water had been drained off Wednesday morning to allow crews to re-enter the building.

The crews will work slowly because the structure is unstable, McLaurin said.

“It’s not going to be a fast process,” he said. “Cranes are coming in and we will start picking the building apart. Thousands and thousands of tons of debris have got to come out of the way to gain access.”

He said the two bodies were within 100 feet of each other in the rubble. Seven-person search crews will be rotated in and out of the building every 30 minutes.

Hazmat suits were required because ammonia vapor, which had been tamped down by the rain, was leaking up through the debris, McLaurin said. But the gas wasn&apos;t a danger outside of the building and schools in the area planned to proceed with classes. Some roads in the area were still closed.

Officials said 300 workers were in the plant when the blast occurred and 38 employees were injured, including four with critical burns. Three firefighters were treated for inhaling ammonia fumes and released.

ConAgra spokeswoman Stephanie Childs said a fund was being set up to help families of victims and that employees would continue to be paid. She said the company will work with the Spears family to provide any support possible.

“We extend our deepest sympathies to her family and her loved ones,” Childs said.

Garner Mayor Ronnie Williams said families were “somewhat in limbo. They&apos;re in a ton of uncertainty.”

The blast collapsed an exterior wall, smashing cars parked next to the 500,000-square-foot building.

Authorities could not say where in the plant the blast happened or what caused it, but some workers who escaped said chaos and panic followed.

Janelle Lynch, who has worked at the plant for eight years, said she saw flames and ran. She planned to leave through the cutting department, but the roof started to collapse, so she went in the other direction and escaped through a warehouse.

“I saw a fire and things just started exploding,” she said.

About 900 people cover four shifts at the plant, one of ConAgra&apos;s largest, Jackson said. The ammonia is used to refrigerate meat before it’s turned into Slim Jims.

The plant was last inspected by the North Carolina Department of Labor for workplace safety last July and no violations were found, department spokeswoman Dolores Quesenberry said. The plant had violations in previous years, including a fine in 2007 for problems with eye and face protection equipment.