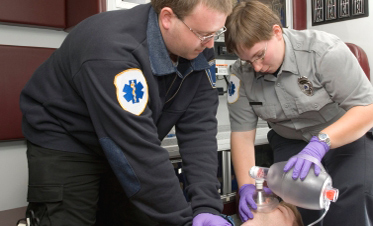 A 29-year-old old man was working with others at a construction site. The workers encountered a beehive, and the man was stung several times by a large number of swarming bees. Immediately after this, he commented to co-workers that, in addition to the pain of the stings, he just wasn’t feeling well. He complained of lightheadedness, weakness and nausea.

The others elected to load the man into a truck and drive five miles to the nearest hospital. The man began to feel worse. He complained of increased weakness and nausea as well as some difficulty breathing. The driver of the truck decided to stop at a local convenience store to contact 9-1-1 and await the arrival of an ambulance.

As the workers pulled in to the parking lot, the man became unresponsive. As one co-worker called for help, the others recognized the injured man wasn’t breathing and didn’t seem to have a pulse. They considered pulling him out of the vehicle to perform CPR, but left him inside because a severe thunder and lightning storm had developed, making outside working conditions hazardous.

The patient was found still in the vehicle by arriving EMS crews. He was pulseless and apneic. Crews quickly removed him — in the very heavy rain — and placed him in an ambulance. CPR was initiated. The cardiac rhythm was asystole. Epinephrine and atropine was administered, and the patient was successfully intubated. Ventricular fibrillation was noted, but the patient didn’t respond to defibrillation at a dose of 200J biphasic. Asystole recurred and CPR continued, and the patient was transported to the hospital.

En route, the EMS crew noted the patient had no obvious physical abnormalities. He had no rash and no evidence of any facial or airway swelling. Additionally, there was no sign of the multiple bee stings reported by the co-workers. In short, there was no apparent explanation for this seemingly healthy man to suffer a sudden cardiac arrest.

Upon arrival to the emergency department (ED), CPR continued. Multiple doses of epinephrine were administered. Eventually, the patient developed a palpable carotid pulse. Twenty minutes after presentation to the ED, the patient demonstrated a blood pressure of 100/60 mmHg and a heart rate of 110 beats per minute while on an epinephrine drip of 4 micrograms per minute. However, he didn’t demonstrate any neurologic response.

No additional history was available to the hospital staff at this point. The patient was admitted to the Intensive Care Unit (ICU).

After three days in the ICU with no improvement in the patient s neurologic status, life support was discontinued. Limited organ donation took place. During this period, family members were able to provide missing historical facts about the patient. The man had, in fact, been very healthy except for significant reactions to bee stings. He had been encouraged to seek medical attention regarding these reactions and to perhaps obtain an epinephrine auto-injector. He had failed to do this.

The conclusion was that this patient died of anaphylactic shock. Factors supporting this cause of death included the family’s history coupled with the story of the multiple bee stings at the scene and the patient’s very sudden deterioration. Airway changes consistent with anaphylactic shock were identified on post mortem examination.

Anaphylaxis is caused by activation of the immune system by antigens that trigger inflammatory processes in the body. It’s an extreme manifestation of an allergic process. Between 1 and 16% of the U.S. population is considered to be “at risk” for developing anaphylaxis. The most severe form of anaphylaxis, anaphylactic shock is a rare but critical emergency in which prompt recognition and treatment by EMS and ED staff is potentially life saving.

Typical potential antigens or triggers for anaphylaxis include such foods as shellfish and nuts — particularly peanuts. Other common triggers include antibiotics — most frequently penicillin-based drugs.

It has been thought that most food and drug allergic reactions don’t commonly progress to anaphylactic shock. However, severe anaphylaxis or anaphylactic shock in response to food triggers may be on the rise. In a recent survey of 171 school nurses in the Nov. 11 edition of MedPage Today, 38% reported seeing a case of food-related anaphylaxis in children. Fatalities in this group, at 0.1%, were low.

Recently, in our region (the Colorado Springs, Colo. area), a child developed cardiac arrest secondary to anaphylactic shock at school after eating peanuts during recess. He was unable to be resuscitated.

Venom from the stings of Hymenoptera — yellow jackets, honeybees, wasps and hornets — accounts for the vast majority of deaths due to anaphylactic shock. Reported death rates are about 50 per year in the U.S. Allergic sensitization to Hymenoptera venom is believed to occur in about 0.4-4% of the American population. Additionally, fire ant stings have also caused anaphylactic shock.

In response to an antigen, an initial process called sensitization begins. In sensitization, mast cells and basophils link with Immunoglobulin E (IgE) to release chemical mediators in an attempt to neutralize the antigen. Sensitization sets up a later, more severe reaction (anaphylaxis) if the same antigen is reintroduced to the body at a later date.

While a number of chemicals from mast cells and basophils are associated with anaphylaxis, the most important is histamine. It produces contraction of bronchial and intestinal smooth muscle. It also leads to changes in increased capillary permeability. This results in loss of fluid from the blood vessels and the resultant development of hypotension and shock. Other chemicals contribute to depression of cardiac contractility and pulmonary edema.

Most of the pathology demonstrated at autopsy involves laryngeal edema, vascular congestion of the lungs and bronchioles and myocardial injury. However, sometimes very few pathologic findings are identified after an anaphylactic death.

Symptoms and signs that may be seen with severe allergic reactions and early anaphylaxis include urticaria (itchy rash or wheals), nasal congestion, laryngeal edema, cardiac dysrythmias, abdominal cramping and vomiting. Eventually, vasodilation and fluid loss can result in hypotension leading to complaints of lightheadedness and syncope.

One of the difficulties in rapidly progressing anaphylaxis is that only a portion of the symptoms and clinical findings may be present. While urticaria is usually seen in anaphylaxis, if cardiovascular collapse occurs suddenly — there may not be time for skin manifestations to develop. Angioedema may not be apparent either in cases of rapid deterioration. In these cases a history of exposure to a potential antigen becomes critical in the consideration of anaphylaxis as the ultimate cause for the patient who may already be in arrest.

The physical examination may demonstrate laryngeal stridor, hoarseness, drooling, tachypnea and excess salivation. These signs suggest upper airway obstruction in association with anaphylaxis. Lower airway findings may include wheezing and rhonchi. Both upper and lower airway obstruction signs or just one or the other may be present. As is in this case, cardiovascular collapse may occur very quickly without much of these antecedent symptoms and findings present.

Treatment involves basic airway maneuvers to facilitate oxygenation and ventilation. A patient in shock should be placed either in Trendelenberg or the recumbent position — with the feet elevated. Prompt recognition of the likelihood of anaphylaxis is critical for EMS responders. Once anaphylactic shock is suspected, the primary therapy after addressing the airway is fluid resuscitation followed closely by epinephrine — early and often — as needed. Intubation may be difficult due to the potential anatomic abnormalities of the airway often associated with anaphylaxis. These patients are often not good Rapid Sequence Intubation (RSI) candidates. Attempts at intubation shouldn’t delay epinephrine administration.

Epinephrine has alpha and beta adrenergic effects, which are beneficial to the patient with anaphylaxis. The alpha effects increase vascular resistance and decrease the permeability of the capillaries to acute fluid loss — reducing the potential for systemic shock. The beta effects cause bronchodilation and increase cardiac activity.

One concern of the use of epinephrine is excessive oxygen demand by the increased cardiac workload, leading to potential cardiac ischemia. Additionally, tachydysrthymias may result. These are real factors to consider. But in the field and ED, we have to individually weigh the risk/benefit of epinephrine in these patients. If the patient is critically ill due to suspected anaphylaxis, epinephrine should be given as needed to reverse the high mortality risk — even in patients with cardiac disease.

Four routes of epinephrine administration are available. Subcutaneous injection (SQ) has been advocated in the past. It’s reasonably effective in stable patients. But in the hemodynamically unstable patient, intramuscular (IM) is now the preferred route if an IV line hasn’t been established. IV epinephrine is the first choice for the patient critically ill with anaphylactic shock. Intraosseous (IO) administration may be used as a substitute for IV if access isn’t obtainable.

Additionally, some authors recommend sublingual injection of epinephrine as an alternative. This option isn’t available in our local protocols, and I doubt it is commonly available to the majority of EMS agencies.

Endotracheal tube (ETT) epinephrine delivery isn’t effective and should not substitute for any of the four routes listed above.

Standard dosages of epinephrine are 0.01mL/kg of a 1:1,000 solution (1mL =1mg) given either SQ or IM. If the patient appears severely ill manifested by severe airway obstruction or signs of systemic shock, IV or IO epinephrine should be used. Typically, 1 mL of a 1:10,000 dilution (1mL = 0.1 mg) is used in an adult patient in this situation. If the patient is not in cardiac arrest, relatively slow IV/IO injection is recommended — between five to 10 minutes. Pediatric IV/IO dosing is 0.01mg/kg (1:10,000). Dosages may be repeated every five to 10 minutes as needed unless epinephrine cardiovascular toxicity is suspected.

If the patient responds to IV/IO epinephrine bolus therapy, an epinephrine drip may be considered — depending on local protocols. This is usually dosed at 1-4mcg/min (1:10,000) in the adult and 0.1-1mcg/kg/min in pediatric cases.

If epinephrine isn’t available by protocol to be used in a drip form in the treatment of anaphylactic shock, dopamine may be substituted. However, a higher dose range of dopamine (over 5 micrograms/kg/minute) will be needed to approach the beneficial alpha and beta stimulating effects of epinephrine.

Racemic epinephrine and/or albuterol nebulizer treatment may be helpful in more stable anaphylactic patients that are breathing well enough to utilize it. If the patient has been successfully intubated, one of both of these agents can be added via in-line nebulization.

Additional treatment includes the use of antihistamines (typically diphenhydramine 25-50mg adult or 1mg/kg pediatric — IV or IM) and steroids. Glucagon may be helpful, especially if the patient presents with anaphylactic shock and is on beta blocker medication. (Epinephrine may not be as effective in these cases). While helpful, these drugs are clearly second-line to basic airway maneuvers, epinephrine and fluids.

What Can EMS Learn from This Case?

In the case above, the patient was aware he had a significant allergy to bee sting venom. His family encouraged him to see a physician about this problem. He never appreciated the importance of his family’s urging.