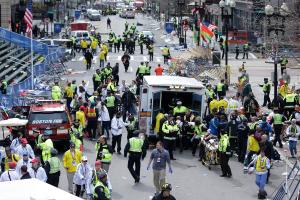 It was a beautiful spring day in Boston the morning of April 15, 2013; ideal weather conditions for the 117th running of the prestigious Boston Marathon, the oldest annual marathon in the world. Unlike the previous year when temperatures reached 90 degrees F and resulted in 2,000 runners seeking medical attention along the course, the weather was cool and comfortable for the 27,000 registered runners and 500,000 spectators cheering them on.

But then, at 2:49 p.m., everything changed. Two improvised explosive devices were intentionally detonated in the crowd resulting in the deaths of three spectators and the serious injury and maiming of scores of others. One hundred eighteen patients were transported from the scene by ambulance to nine area hospitals. All would survive.

It was the beginning of a week unlike any other in the Boston area: a terrorist attack in the city’s Back Bay neighborhood, a presidential visit, the murder of a Massachusetts Institute of Technology police officer, a gunfight with the two bombing suspects during which a Massachusetts Bay Transit Authority police officer was shot, a suspect was killed, a 12-hour “shelter in place” request for a major metropolitan area and the eventual capture of the second suspect.

Challenging the universal first responder tenet of scene safety, the Boston bombings represented a response that required a rapid, but thoughtful plan which took into account a fluid and dynamic threat, while mitigating as much risk to first responders as possible.

While the Boston bombing response didn’t involve an active shooter, it had many of the same concepts and components: multiple patient injury locations, a scene that wasn’t able to be totally secured by law enforcement in which critically injured patients were literally bleeding to death  and requiring rapid treatment and transport.

Video taken by a Boston Globe sports videographer at the finish line with Boston EMS radio traffic overlaid on it illustrates what Boston EMS personnel were doing and thinking in the moments after the explosions. (Watch the video below or at http://youtu.be/7j7LkuPzT1c.)

Incident command positions were already established as part of the special event planning, so radio traffic was minimized. The nature and exact location of the incident was confirmed and units in the area were instructed to hold their positions. Boston EMS’ mass casualty incident (MCI) plan was put into effect, area hospitals were notified and put on alert, a secondary staging area was established and mutual aid plans were seamlessly implemented. These immediate actions didn’t occur by chance; they were years in the making.

Identifying the Problem
The response to active shooter incidents (ASIs) in the United States has historically involved a segmented, sequential public safety operation. Patrol officers were commonly trained to “contain and wait” at an ASI until more specially trained personnel (e.g., SWAT) arrived.

The mass shooting at Columbine (Colo.) High School has been widely viewed as the watershed moment in law enforcement that brought about a major tactical shift and reinforced the need for an immediate, aggressive response to active shooters. Since then, law enforcement response to ASI no longer focuses on threat containment, but instead emphasizes a rapid and immediate response by first arriving units to neutralize the shooter as quickly as possible.1,2

In the years preceding the Boston bombing, Boston EMS had begun training in conjunction with the Boston Police Department on how both agencies would coordinate a response to ASIs.

Full-scale, active shooter exercises in the metropolitan Boston area demonstrated to both law enforcement and EMS officials that despite best efforts to bring lifesaving medical care to victims after a threat had been neutralized, the time to first tourniquet or bandage placement remained unacceptably high. According to the FBI, a typical ASI lasts on average 12 minutes with 37% lasting less than five minutes.3

While training, Boston EMS focused specifically on the active shooter threat, and many of the same principles found immediate application at the bombing incident that occurred on Boylston Street.5

Military experiences over the past decade have demonstrated improved outcomes to victims of traumatic bleeding with early hemorrhage control techniques employed at the point of injury.6—8

This type of focused intervention, described in military-based medical training programs such as Tactical Combat Casualty Care (TCCC), has been integrated into an early and coordinated response with law enforcement.4

Defining the Operational Environment
The “warm zone” concept represents a shift in law enforcement and EMS response tactics, equipment needs and incident command practices. Boston EMS recently developed a policy to provide departmental guidance for EMS operations in the warm zone, defined as an area of indirect threat that has been swept by law enforcement and cleared of any immediate threats.

A key component to successful warm zone operations is joint command and control by all disciplines involved at an incident. In Boston, all major events and incidents are operated through a unified command process made up of command staff from the primary response agencies within our jurisdiction.

Operations in a warm zone can only be successful when leaders recognize the roles of participating disciplines as well as the overall objective.

As areas are cleared and resources permit, law enforcement operations may initially include deployment of rescue teams that focus on extraction of wounded victims to a designated casualty collection point for EMS to render initial aid.

EMS personnel may be requested to join a law enforcement rescue team, thereby forming a “rescue task force” for operating in the warm zone to provide medical operations including triage, primary point-of-wounding treatment (hemorrhage control and airway), and assist with extraction of victims based on available resources and capabilities.

EMS personnel are instructed not to enter an area that hasn’t been cleared without law enforcement consent and protective escort. EMS providers wear issued ballistic body armor and function within the force protection structure provided by accompanying law enforcement personnel.

Training conventional EMS providers to operate in what has been traditionally considered a “tactical” operation has focused on developing a mindset to operate jointly with law enforcement and focus medical interventions based on nationally recognized recommendations such as the Committee for Tactical Emergency Casualty Care (C-TECC) and the Hartford Consensus.9,10

Active shooter training for Boston EMS personnel has included an understanding of the tactics, techniques and procedures of our law enforcement partners responding to an ASI, developing common terminology among all the responding disciplines and adopting focused medical care our providers will deliver in the active shooter environment.

EMS provider comfort and ability to respond jointly with law enforcement to ASIs is directly related to the knowledge and experience developed during training. With the Boston EMS experience, 89% of providers felt adequately prepared to respond to an ASI after specialized training, compared to 41% of providers who felt this way prior to the training.11

The decision by EMS personnel to jointly operate under the force protection of law enforcement for the preservation of lives must be judged carefully against the risk of injury or harm to operate in such an environment. Boston EMS personnel operating at an incident are trained to constantly assess for secondary devices or other threats. Should threats be identified, it would necessitate upgrading the area to one of direct threat (“hot zone”) requiring rapid evacuation of all EMS personnel and surviving patients.

Medical Treatment in the Warm Zone
The importance of integrating early lifesaving medical interventions in the response to an ASI is an integral component to victim survival.10 Boston EMS has long recognized the critical importance of aggressive hemorrhage control along with rapid transport to an appropriate receiving facility in the case of severe trauma.

Since the late 1970s, Boston EMS EMTs and paramedics have used surgical tubing tourniquets for extremity hemorrhage control successfully.12,13 In the last few years, all Boston EMS field response units have added hemostatic gauze dressings to their hemorrhage control kits. And since the 2013 bombings, commercial windlass-type tourniquets have been issued to all department members in addition to the surgical tubing tourniquets.

The focus of medical care in this environment isn’t based on conventional basic trauma life support standards, rather, it accounts for the dynamic situation of an event, such as a terrorist bombing or active shooter, and limits care to high-yield, best practices while providing rapid extrication of victims to a safer environment more appropriate for further medical care.

A Paradigm Shift for EMS
The 1999 Columbine school shooting was a turning point for law enforcement response tactics to ASIs. A realization had been made that the time delay for specialized law enforcement assets to arrive and manage a dynamic event wouldn’t work.

The Boston bombings in 2013 have been viewed as an affirmation that current recommendations for EMS operations at mass bombing and ASIs do indeed work. Similar to the law enforcement paradigm shift, EMS has now seen a major change in the way we assess the level of threat of an incident and develop an appropriate, logical response to maximize the number of lives saved.

The EMS response mindset is undergoing change; rather than asking, “Is the scene completely safe?” the more appropriate question should be, “Is the scene safe enough?” based on what’s known at the time.

EMS agencies need to consider how they will operate in a warm zone environment with other responding agencies. Regular training with law enforcement partners is a key component to a successful response, with all agencies knowing how they’ll work with one another. This is done through the sharing of ideas, understanding common tactics, techniques and procedures, developing common terminology and understanding both capabilities and limitations. âœš