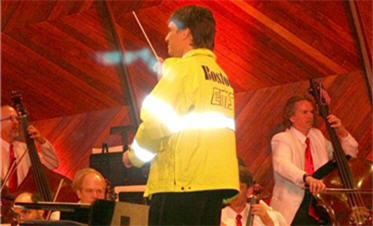 The Fourth of July celebration in Boston is one of the biggest events of the year for Boston EMS (BEMS), attracting an audience comparable to the population of a mid-sized city, all of which crowds onto the Charles River Esplanade, neighborhood rooftops and city bridges. This year, approximately 500,000 people gathered to watch the Boston Pops Orchestra and the city s fireworks display, which was also being broadcast on national TV.

With relatively cool temperatures and overcast skies, it wasn t too busy overall for the multitude of EMS personnel strategically positioned throughout the multiple venues.

Rain threatened as the day progressed, with a good chance that it would be raining steadily by the 8:30 p.m. start of the concert. Orchestra seating was pushed back into the Hatch Shell to provide better cover for the performers and instruments, but the conductor s podium remained out in the elements.

As if on cue, the rain started with the first notes of the Star Spangled Banner and F-15 s flew overhead. After the Star Spangled Banner, Keith Lockhart, the Boston Pops conductor, donned a Massachusetts State Police raincoat. It was raining pretty hard and clear that Lockhart would need a jacket for the duration of the concert.

At this point, Boston EMS Chief Richard Serino decided it was only fair that Lockhart wear a Boston EMS jacket after intermission. He located paramedic Roger Aiello — who appeared to be about Lockhart s height — and asked Aiello if he would be willing to give up his jacket to garner some national attention for Boston EMS. Aiello readily agreed.

Serino spoke to the event producer, who was busy with the show, about his idea. The producer said he was willing to allow BEMS officials backstage to attempt to give Lockhart the jacket.

The crowd was undaunted by the heavy rain and loving every minute of the concert. As the orchestra proceeded into its third song, Aiello and Serino made their way backstage to talk to the Boston Pops staff. Aiello gave his jacket to the staff and remained backstage.

Serino returned to the front of the venue and was talking to the producer when, suddenly, his crews receive an urgent alert that one of the stage hands assisting the Blue Man Group, which was about to perform, fell off a walkway on the stage and then fell under the stage. Serino and a team of EMTs and paramedics and immediately crawled under the stage to take care of the worker, who had sustained orthopedic and other non-life threatening injuries.

The extrication was challenging because the crews were unable to go back the way they entered the scene without risking further injury to patient or themselves. So they opted, instead, to exit via the stage during a scheduled commercial break and with minimal disruption to the show. The patient was removed to one of BEMS on-site medical stations for further evaluation. He was then transported to a nearby hospital.

While heading back to the stage area, Serino talked with the event s executive producer who had watched the entire extrication and was impressed with the quick, decisive and cooperative action of the BEMS providers. Serino then mentioned his idea about the conductor changing jackets at intermission and the executive producer enthusiastically agreed.

As Serino and his staff went backstage, a member of the Boston Pops staff said, I just saw what you guys did and I switched jackets between songs. Keith [Lockert] has the Boston EMS jacket and will wear it for the rest of the concert.

After the concert, Lockhart expressed his appreciation to Serino and the BEMS staff for allowing him to use an EMS raincoat. He then met with Aiello to take photos and autograph the raincoat for him.

Lockhart also asked if it would be possible to obtain his very own BEMS raincoat for use in the future. Serino is having a new coat delivered to Lockhart to keep him dry and thank him for his support of Boston EMS.