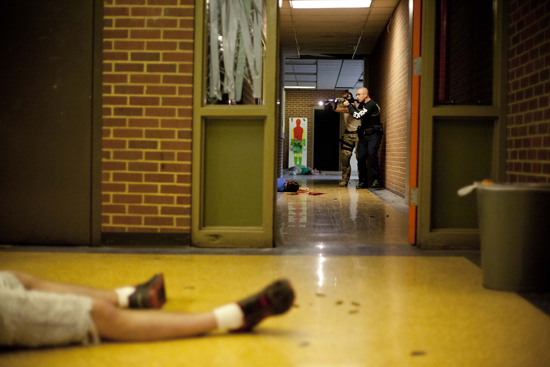 Shot through his femoral artery, a young man lays bleeding on the floor of a Virginia Tech classroom. He’s holding pressure on the wound to little avail as the shooter continues to stalk the halls.

A police officer finds him and cuts an electrical cord off an overhead projector to fashion a crude tourniquet that he ties around the man’s thigh.

The victim is dragged into the hall and over to a Blacksburg Volunteer Rescue Squad (BVRS) SWAT medic, who sees the patient turn gray and become unresponsive. The medic applies a MAT tourniquet and starts a large bore IV, resulting in immediate patient improvement.

BVRS History
Blacksburg Volunteer Rescue Squad was established in 1950 as an all-volunteer EMS agency providing free service to a community of approximately 55,000 residents, including approximately half of Montgomery County, Va., and the town of Blacksburg, which is home to Virginia Tech. The squad has approximately 120 members, including full-time community residents with other jobs and high school and college students.

BVRS has been involved in providing emergency medicine in tactical environments in varying capacities since 2003. BVRS operated the local area’s first heavy and technical rescue (HTR) team, training many of its members in specialized rescue operations such as hazmat, tactical operations, trench rescue and confined space rescue. 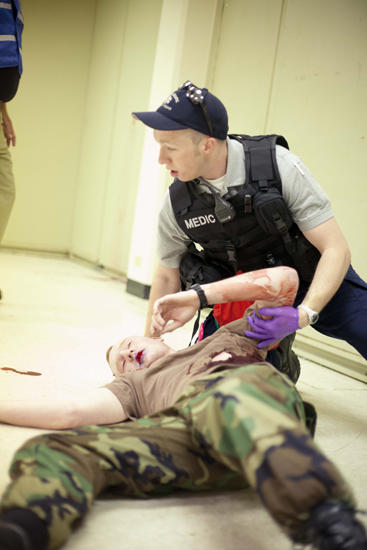 Early implementation included tactically-trained medics attached to law enforcement SWAT teams. BVRS continues to support these teams. One squad member–a paramedic–is a member of the Montgomery County Sheriff’s Office SWAT team and two of the squad’s three operational medical directors (both emergency physicians) also deploy with the Blacksburg Police Department SWAT team. These highly trained medical professionals have attended multiple tactical medic courses and other advanced training to prepare them for this type of deployment. Other squad members, including those who were a part of the early HTR team, continue to train in specialized rescue, with a renewed focus on these tactical operations.

In the early stages, the tactical medic program was controversial in both BVRS and with local law enforcement; however, the squad’s first SWAT medic proved the value of that role on a number of challenging gunshot wound calls in remote areas.

Everything changed on April 16, 2007, after the massacre at Virginia Tech. Blacksburg Rescue Chief John O’Shea explains, “Our SWAT medic went into Norris Hall [on Virginia Tech’s campus] with Blacksburg Police Department’s ERT [emergency response team] operators. He and a Virginia Tech Police Department ERT medic made a number of lifesaving interventions. The picture of the officers carrying [a] young man across the Drillfield is one of the most iconic images of that tragic day. He lived, and the rescue task force began to evolve.”

Entering the Warm Zone
The rescue task force, or RTF, has been built around the history of active shooter situations in Blacksburg, the United States and around the world.

“Over time, with experience and review of after-action reports of mass shootings worldwide, it became clear that to truly make a difference in patient outcome, a change in EMS tactics was long overdue,” O’Shea explains. “Much like the change seen in law enforcement tactics following the Columbine shootings, we saw a gap that needed to be bridged.” The RTF is designed to provide several basic lifesaving interventions to as many victims as possible, as quickly as possible.

Consider an active shooter scenario in an office building. The entire building is initially considered a “hot zone,” in which EMS personnel don’t operate. Immediately upon arrival, law enforcement makes entry and engages and neutralizes the threat. Moving directly toward the sound of gunfire, law enforcement teams bypass victims, bodies, corridors and doorways. 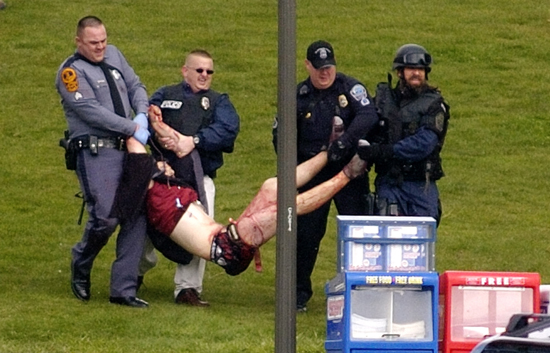 Kevin Sterne is carried out of Norris Hall at Virginia Tech in Blacksburg, Va., after a shooting incident on April 16, 2007. AP Photo/The Roanoke Times, Alan Kim

BVRS Captain Dave English, who deploys with the Montgomery County Sheriff’s Office SWAT Team, explains, “After the initial police response, law enforcement will secure a designated casualty collection point (CCP) inside the structure, creating an internal warm zone. Our RTF members will enter and begin treatment and triage in that CCP. Law enforcement will bring victims to that CCP. Other first responders will come up to the CCP (from an exterior door) to transport patients to the treatment area outside of the structure in the cold zone.”

BVRS, coupled with the local law enforcement community, organized and staged a large-scale active shooter drill with new team members and equipment in the fall of 2013 to refine the concept of the RTF. “We started with a gear load-out similar to our tactical medic vests since we were more familiar with that platform from previous experience,” English said. “We found that we really needed gear laid out in more of an MCI [mass casulaty incident] design than a tactical medic design. Unlike a tactical medic, who primarily provides support to law enforcement and may treat one patient more extensively for a long period of time, these medics are treating and triaging multiple patients and will only be with them for a few minutes before they’re removed. It really changed the mindset of our equipment plan.”

Evidence has shown that the majority of victims in these types of incidents can be saved with quick and easy maneuvers such as hemorrhage control, tourniquet application, basic airway management and other rapid interventions. Members use the “simple triage and rapid treatment” (START) method to identify patients in critical need of evacuation.

The BVRS leaders carefully considered various levels of protection when selecting ballistic gear. English explains, “We wear level IIIA vests, which are the highest level before you get to rifle plates, etc. This is a higher level [of protection] than a lot of the law enforcement has, and since they’re securing the area for us, it’s actually a very secure situation as compared to some of the other day-to-day rescue operations that we do. Higher-rated vests, helmets and other equipment are excessive and would limit mobility.” 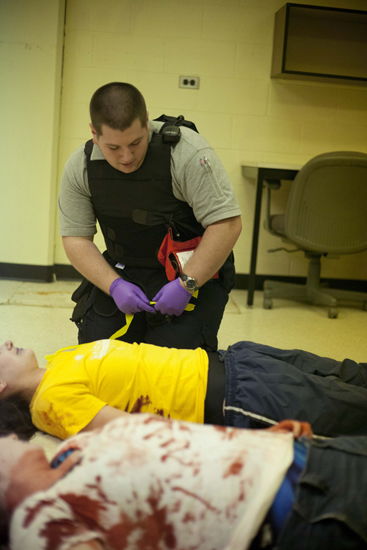 Improving mobility was an obvious necessity for the BVRS. O’Shea says that experience from previous active shooter tragedies has shown that “we need EMS inside as soon as possible. The research is there–the one thing nobody has is time. [The Blacksburg] area doesn’t have full-time SWAT teams, so SWAT medics aren’t guaranteed. Besides, their role is to stay with the SWAT team and function in a different capacity.”

The patient inside Norris Hall was fortunate to receive quick care from a SWAT medic only because the region’s SWAT teams were already mobilized and less than a mile away when the Norris Hall shooting started. The region’s need for a system that’s rapidly deployable–without previous notice–was apparent.

The BVRS has been able to work closely with local law enforcement to develop and test this system thanks to a longstanding positive relationship between agencies at all levels. Chief Anthony Wilson of the Blacksburg Police Department explains, “The key to the success of this type of operation lies in the relationship. This is established on a day-to-day basis and driven home on the simple calls (accidents, assaults, etc.). [The] RTF will not work if there’s no trust in the concept and in the partnered EMS agency. The forward command element is critical and those folks have to have a daily working relationship with each other. Police, by design, are trained to take command and get control of the scene; EMS is patient-driven and often viewed as creating more confusion. We overcome this by learning from each other and defining each other’s mission. Police want medical people around–they need medical people around. We simply need to train together and bridge the gap to build individual trust in one another.”

The active-shooter drill earlier in the year allowed the BVRS and area law enforcement agencies to refine the RTF concept and gain experience working in a chaotic environment, while practicing in a fairly controlled setting to identify changes needed and lessons learned for all participants.

Moving Forward
EMS in active shooter situations is a hot topic in the EMS industry and national media. In September, the U.S. Fire Administration (USFA), a division of the Federal Emergency Management Agency (FEMA), issued a report on active shooter events that’s ignited a heated debate among first responders and system administrators. When asked about developing warm zone operations for active shooter situations with a volunteer agency, O’Shea noted, “The fact that we’re a volunteer agency doesn’t relieve us of our responsibility or duty to prepare for what may come. Statistically speaking, the odds are very low that we’ll be involved in a mass shooting, especially one at a school. Yet a number of our members as well as many law enforcement officers in the area have responded to two of them in our run area in recent years.”

The RTF system takes a similar approach to the Hartford Consensus of April 2013. The Consensus encouraged the use of existing training and equipment in an integrated approach to reducing preventable death. The RTF uses standard equipment found on all BVRS ambulances, and the operational model mirrors the THREAT acronym found in the Hartford Consensus. (See Figure 1, below.) The RTF system also unites EMS/rescue, law enforcement and fire into a coordinated response by using integrated communications systems, common protocols and frequent training with participating agencies. 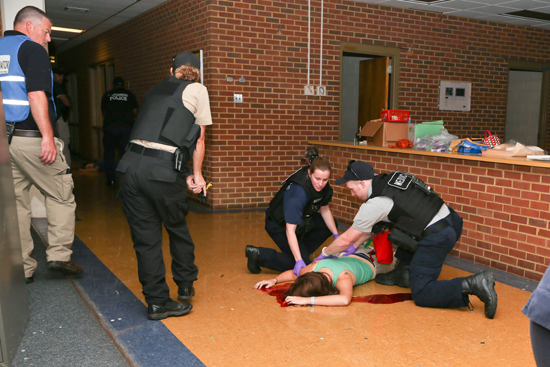 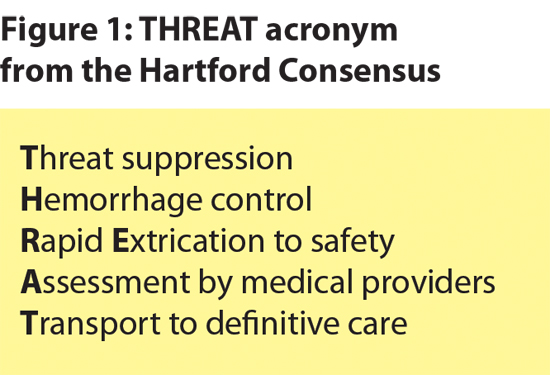 BVRS leadership spent a lot of time evaluating the risks and benefits of establishing the RTF. Participation is completely optional among the members. When presented with the evidence, the tactics and the training, the members overwhelmingly supported the concept and were eager to become operational. Wilson noted that police officers in the area “were excited to know that we were moving forward with this training process … The police agencies involved are totally committed. This is one of the greatest advancements we’ve ever done and we have the momentum to really make progress.”

Point Blank Operator Armor Carriers and Level IIIA body armor provide the same level of protection as first-in law enforcement. Multiple sizes are available to fit the diverse crew. The outside of the vest holds a pair of trauma shears secured by a Chinook shears leash for quick access. A Pentagon MOLLE light is attached to the vest to provide illumination.

In addition to the vest, users deploy with a Thomas EMS triage pack with four tape colors, council triage tags and a quick reference chart. Pens and markers are kept in MOLLE loops on front of the vest. Medics use their standard portable radios and shoulder mics for communications within the team and to unified command.

All of this equipment is identical to what is carried on BVRS ambulances, so there’s no special training required. The RTF deploys with pre-stocked replacement pouches capable of treating 60 patients for immediate restock and resupply in the CCP. 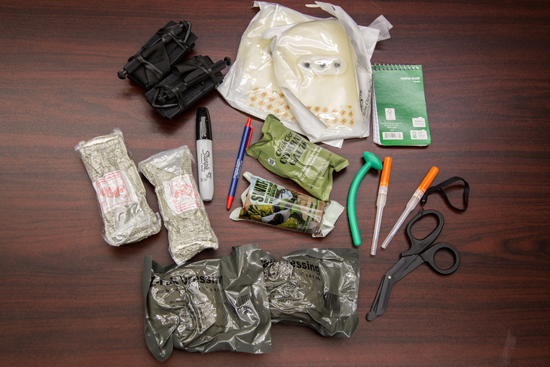 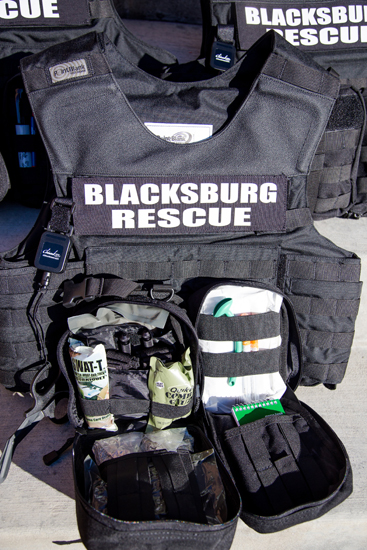