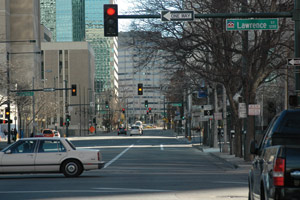 I remember in the ’70s a guy named Al Davenport came to my agency and talked my boss into buying his driving feedback system. It was built around a black box containing mercury switches, beepers and a pair of mechanical counters. The box was mechanically connected to the speedometer cable.

Davenport installed his black box in one of our Cadillacs. As a training prop, he attached a manometer to that long, shiny hood with straps and suction cups. The manometer consisted of three clear vertical tubes rising from a horizontal tee, which was carefully leveled. The vertical tubes were half-full of colored water and marked with tape, so an operator could see in real time how horizontal forces acted on the vehicle during different kinds of driving.

When you made a left turn, the fluid rose in the right front tube. When you made a right turn, the same thing happened in the left front tube. And when you accelerated or decelerated, fluid levels rose and fell accordingly in the forward tubes or the rear tube. Inside the cab, the box incorporated beepers that warned you in stages how much horizontal force you were exerting. The idea was that if you could keep those fluid levels stable (or beepers quiet), you were exposing the ambulance to less horizontal force. Theoretically, that meant a smoother, safer ride–and less wear on the vehicle.

Davenport was a nice enough guy, and eventually he sold his system to us and Acadian Ambulance in Louisiana. But our service area had a lot of steep hills and New York drivers. On top of that, I think Acadian did a much better job of implementing the whole system. Besides, our bosses normally asked us about stuff like this before they bought it, but this time they sort of forgot. Worse yet, the manager who bought the thing built a “gotcha system” around it and called it “driver training.” Bottom line: Most of us figured Davenport was full of it, and his system was a game we could win. Sure enough, we did.

Today’s version of Davenport’s system belongs to Road Safety International Inc., which refers to it as the Safe Force driving system. It uses a much improved and enhanced version of the black box to provide real-time feedback to vehicle operators, and numerous EMS agencies live by it.

Whatever you think of those black boxes, Life-Saver, if you’ve been in this business long enough, you know that, if you discipline yourself to keep your mind wide open, you can learn a lot from what’s going on around you. And you can learn something from just about anybody.

As part of its core concept of low-forces driving, one of the best things about Davenport’s overall strategy was his practice of monitoring the “age” of pending traffic signals.

This enables you to decelerate earlier and without braking, which means a smoother ride for the occupants of the patient compartment. This generally minimizes wear on your vehicle, saves fuel and brakes. Most of all, it gives you more of a “space cushion” to accommodate other motorists who suffer from cranio-rectal impactions.

Davenport’s perspective was, if it’s about time for a signal to change colors, you should consider it “stale” and anticipate the change in advance. Likewise, if it’s “fresh,” you should be able to anticipate that it won’t change soon. To make it all work, you devote part of your peripheral attention to the road ahead–for example, a quarter of a mile in rural traffic, and maybe an extra block or so in dense urban traffic.

If Al were alive today, I think I’d find him and thank him for teaching me this strategy. Not only did it protect me from intersection crashes for 20 years, but I’ve taught it to everybody else who would listen over the years.

There’s another thing: It applies just as much to operating your personal vehicle as it does those big, striped noisy ones that earn you a living.
(Or can kill you, any day.) JEMS

This article originally appeared in February 2011 JEMS as “The Road Ahead: Anticipating Signal Changes.”