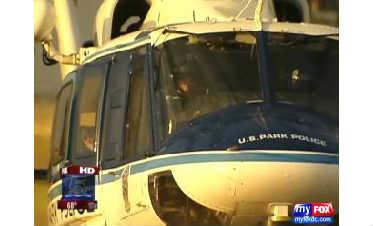 POTOMAC, Md. – U.S Park Police and members of the Montgomery County Fire Department worked together on Sunday to rescue a woman who was injured in a remote area of Great Falls.

Officials say the woman and her male partner climbed and walked through rocky terrain for more than a mile along the Billy Goat Trail when something went wrong.

Rescuers tell us the woman fell and sustained serious injuries.

Montgomery County Firefighters could not move the woman to a hospital by foot or vehicle because the location was too dangerous to safely maneuver a stretcher.

A U.S. Park Police helicopter was called to assist the rescue effort.

The woman was hoisted into the helicopter as the pilots carefully kept the rotor blades a safe distance from rocks and trees.

The woman was taken to Suburban hospital.

So far the woman has not been identified. At last check she was listed in stable condition.