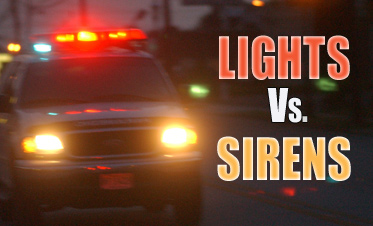 EMS personnel know that, many times, the most frightening aspect of answering an urgent radio call isn’t the call itself, but the trip getting there. We have more chances of catastrophic injury, and even death, as we make our way through traffic, intersections and freeways than we do once we get there. To help offset this danger, our rescue rigs are equipped with overhead lights, a powerful siren and unique markings designed to announce our presence in traffic. But just how effective are they, and what else can we do to make our response safer?

The first time you flip the siren on in your rescue rig, you think the entire world can hear you. After all, the standard 100-watt siren box in most ambulances will put out approximately 120 dbs of noise at approximately 30 feet, which meets the Class A minimum government requirement for siren audibility. So, just how loud is 120 dbs? It turns out, it’s pretty darn loud. Consider that a chainsaw hums along at an even 100 db, that the typical rock concert riffs along at 110 db, and that the human threshold for pain matches our siren box at an even 120 db. So, why do people just not hear us coming?

It gets back to basic physics and car manufacturers. To be effective, a siren has to compete with soundproofing, vehicle audio and climate control systems, and physical distance. In fact, a U.S. Department of Transportation study concluded that siren audibility at intersections was only 25 40 feet, which translates to a safe entry speed of approximately 10 mph. As loud as it may seem in your rescue rig, the fact is that most sirens don’t really project that far, unless you happen to be a pedestrian.

The issue gets more complicated when considering the effectiveness of multiple-tone sirens. In some configurations, the operator can manually control three different siren noises, plus the air horn. My experience running extensive Code 3 as a state trooper determined that the different siren tones didn’t seem to have an impact on driver behavior. The air horn, with its low frequency tones, did. My informal finding seems to match that of researchers. In a landmark study by Dr. John Patterson at the University of Glascow, Scotland, auditory analysis of high- and low-frequency sounds determined that humans have difficulty locating high-pitched noises. Because most sirens depend on high-pitch wails, it would make sense that my low-pitched air horn seemed to elicit the best response. Apparently Federal Signal feels the same way, because they’ve introduced a new siren augmentation device called the Rumbler. The system uses an amplifier and a pair of woofers to create low-pitched vibrations to alert motorists of oncoming emergency vehicles.

When is Loud Loud Enough?

So what about the many siren options we have? Informal studies have shown that siren pitch has little effect on audibility, again because of physics. In a study by Michael Miller and Robert Beaton (1). Several factors were determined to have a direct effect on siren audibility. First, the degree of effectiveness is relative to the distance between the siren and the listener. This is simply the inverse square law of physics. Second, vehicle designs tend to mask outside noises. Typical sound reduction of 20 30 decibels adjusted (dBA) can be found with most modern production vehicles, which typically lowers a 120 db siren to the level of 90 or so dBAs, which is about the level of the typical vacuum cleaner. This significant reduction is standard for most drivers who are inside a car with closed windows. This is because the decibel scale is exponential in nature.

As an example, a sound that makes 10 dBAs is 10 times the intensity of the bottom threshold of human hearing (0 dBA), but a sound making 20 dBAs is 100 times more intense than the 10 dBA sound. This exponential equation continues to move up the chart to a point where a 120 dBA siren is 10,000 times more intense than an 80 dBA vacuum. So, siren effectiveness is sharply reduced as it enters an enclosed vehicle space. According to Miller and Beaton, this absorption by the vehicle body is called “insertion loss.”

Third, noise inside a car makes it difficult for drivers to detect sirens and horns. Interior car noise stems from many sources, including the radio or CD player, engine and drive-train components, air conditioner/heater fan, the road noise of tires and open windows, and talking passengers. Miller and Beaton maintain that, for almost any auditory signal to be detectable, its sound-pressure level must exceed the background noise by about eight to 12 dBA, which is essentially 10 times more intensity. This difference in sound-pressure levels is known as the auditory signal-to-noise threshold. Since the interior noise of a car traveling on a modern highway often is measured at about 70 dBA with the stereo off and windows up, one can expect that siren levels of 78 82 dBA at the driver’s ear are needed to ensure that a siren is heard.

Siren audibility gets more complicated when considering closing distances because dBA levels fluctuate. For example, suppose a motorist is traveling at approximately 55 mph, and an emergency vehicle is traveling at 75 mph. Without getting into too much math, the closing distance is approximately 25 feet per second. If the motorist needs four seconds to detect the emergency vehicle and respond, the two vehicles would have to be 100 feet apart. At that distance, according to Miller and Beaton, the intensity of the siren is 77 dBAs, which means it doesn’t exceed the signal-to-noise threshold of the normal sound level in the vehicle. Translated, the siren can’t be heard until the emergency vehicle is much closer, which means reaction time by the civilian driver is considerably shortened. Of course, one way to solve this would be to make sirens louder, but the level would need to be much higher than the human threshold for pain, which leads to other issues.

Data shows that manipulating siren tone and decibel level for motorists traveling in vehicles with closed windows isn’t an effective strategy for alerting motorists of your intentions. Yes, there’s some value to a siren for pedestrians, as well as stopped traffic at an intersection with windows rolled down, but in terms of clearing traffic, its only real value seems to be for vehicles with very close proximity to the front of your vehicle. Keep this in mind next time you enter an intersection running code three: Other drivers might see you because of your lights, or because of your paint scheme, but chances are it won’t be because of your siren.