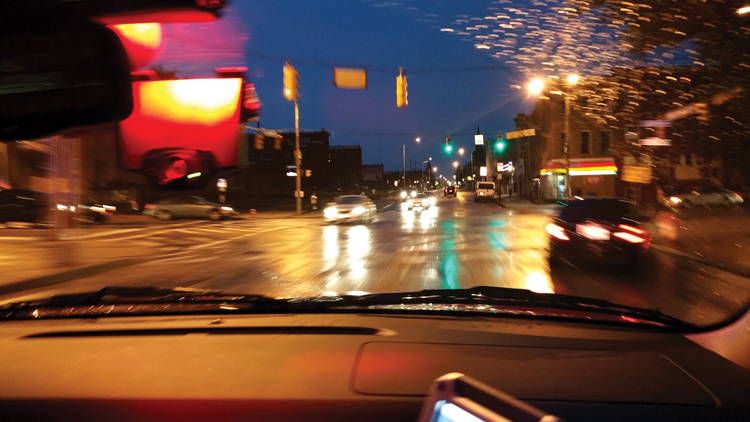 The early days of EMS response was inherently tied to red lights and siren (RLS) responses. Indeed, the RLS response–also known as the “hot” response–has permeated all emergency services providers, including both fire and EMS.

Unlike fire emergencies, which can grow exponentially and spread quickly, only a small subset of medical emergencies is truly time sensitive. Most don’t dramatically worsen in the course of a very few minutes, and they don’t spread from person to person.

There’s an emerging trend toward “cold response” (non-RLS), but in some areas, the RLS response to lower acuity emergency calls for service has seen little change since the beginning of organized EMS systems.

Despite the significant research discussed in this article that demonstrates the risk to EMS providers and the public, minimal time savings and actual clinical benefit, many EMS systems continue to both respond and transport patients using RLS in most, if not all, circumstances. 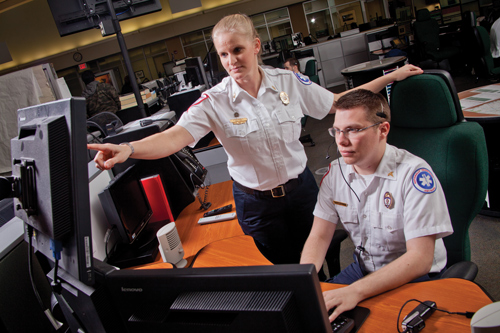 Dispatch and transport policies developed to utilize state-of-the-art call interrogation algorithms can be used to identify patients who might benefit from RLS response and/or transport. Photo courtesy EMSA

A review of the literature on emergency response reveals a consensus among authors that certain procedures, such as early defibrillation and application of CPR, correlate with improved survival.1 However, today there doesn’t appear to be a correlation between a response time standard of eight minutes and 59 seconds and improved survival.

Layperson CPR training, as well as the increasing prevalence of AEDs, have moved emergency response into the community and decreased the need for RLS responses to cardiac arrest patients.

These reductions in the response time window don’t necessarily correlate with increased survival. Although one study correlated a response time of < 4 minutes with a reduction in mortality in those identified at dispatch with intermediate or high-risk mortality, the authors acknowledged these calls were an extremely small subset of their study, mostly with cardiac arrest.

Similarly, another study found no difference when examining arrival times before and after 10 minutes and 59 seconds,3 and when the metropolitan area of Fort Worth, Texas, suspended RLS during a 48-hour window in February 2011, there was no significant difference in patient outcomes vs. the previous week.4

If strictly adhering to an eight-minute response-time window–and perhaps even a 10-minute window–isn’t warranted in most patients, how do we determine what goal to set and what are means to measure these times? This remains the subject of ongoing debate. 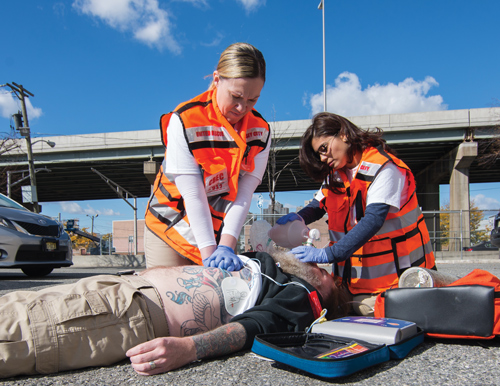 Emergency scenes are primed for layperson intervention, such as the citizen responders of United Rescue in Jersey City, N.J. Photo David LaCombe

EMS leader and consultant Jay Fitch, PhD, has written about a multitude of variables within a call that should be studied to produce meaningful response-time analyses. These variables include: the number of units responding, changes in call priority, call-taking times and inclusion of “out-of-chute” (en-route) times. Another important variable includes whether it’s BLS or ALS arrival on-scene that actually “stops the clock” for response time.5

Fitch also stated that systems must include experiences during unusual demand or overload, including response times to scenes in buildings requiring scaling stairs or use of elevators.5

Some studies on response times discuss the evolving BLS scope of practice and how this might further complicate the accuracy of measurements. More BLS services are now providing what was once considered to be advanced care, such as nebulized treatments, continuous positive airway pressure application and use of AEDs.6

The rate of motor vehicle fatality is four times greater for emergency medical personnel than of all other occupations for U.S. workers, with approximately 65% of all crashes in rural areas.7

Operator error is typically a contributing factor toward fatal crashes, suggesting the need for better training. In a survey of more than 230,000 EMS personnel through the National Registry of EMTs, 7% reported having been in a crash, and 100% of these crashes were while using RLS. Surprisingly, weather was not a factor in any of these crashes.8

Moreover, it’s been shown that the average RLS response saves < two minutes.9 One review even found that RLS responses saved only an average of 43 seconds.10

Given the lack of evidence supporting improved outcomes with RLS response in the face of dramatically increased risk to bystanders and providers, we believe it’s high time leadership of all emergency response systems acknowledge this reality.

EMS administrators and medical directors must weigh public expectations of rapid response to emergency calls against the need to safely provide assets and assistance consistent with the medical need.

The mantra must become, “Faster does not equal better.”

As discussed previously, the big push for rapid response was in an era when public education programs for CPR weren’t widely available and AEDs and first aid programs such as Stop the Bleed were decades into the future.

A survey of the Eagles Coalition–EMS medical directors of some of the largest cities across America and around the world–conducted by the authors in August 2016 revealed some unexpected results.

The medical directors were asked if their system used a “priority dispatch” system in guiding the use of RLS vs. responding RLS to all calls. Even in this modern era of EMS system design, a striking number of agencies (18%) still respond to all calls using RLS. This includes some of the largest U.S. cities, including Chicago, Houston and Dallas. (It should be noted, however, that the RLS response component might be a fire-based first responder, with the ambulance responding cold unless otherwise directed.) Among the systems that do use a priority dispatch, 37% weren’t able to provide data on what percent of their responses were RLS.

Of those providing the data, the mean percentage of RLS responses was 74.1%. It was also noted that a majority of these EMS systems were using a popular priority dispatch software program.

Although many EMS systems are investigating and implementing novel means of triaging and responding to lower-acuity calls, the fact is that low-acuity calls have essentially always been a part of EMS system response.

Absent an appropriate alternative to deploying emergency apparatus (fire apparatus and ambulances), municipalities will continue to apportion scarce EMS resources to such calls. Highly trained and skilled EMS providers likely feel less challenged by lower-acuity calls, perhaps thinking, “Hey Doc, if you’re going to make us go on these nonsense calls, can we at least get them over with as quickly as possible?”

Such policies should allow for the use of RLS to assist in responding in heavy traffic conditions, and incorporate paramedic judgment in determining the transport code to the hospital. In one study, personnel trained in an RLS protocol were 5.6 times less likely to transport RLS. Interestingly enough, although the group trained on RLS protocol transported far less (vs. a similar service that did not), there was no impact on patient outcome.11

This lack of patient outcome disposition difference–coupled with the need for maintaining crew safety–indicates that for most calls a non-RLS transport is a must. EMS providers should rarely transport patients with RLS.

Indeed, an RLS transport of an EMS patient should trigger a mandatory audit to determine if transporting “hot” was of any value.

Additional benefits to responding EMS units without RLS include decreasing the “wear and tear” on the vehicles and the resultant decreased maintenance costs, as well as the potential improvement in customer services that might result when EMS providers know in advance that they’re responding to a lower acuity call.

Limiting the number of RLS responses in an already established all “hot” response system won’t be without its challenges. EMS providers, community leaders and the public must be educated about the proposed changes to the system.

EMS system leaders must demonstrate how prioritizing the use of RLS will better serve the community, provide for safer responses and transports, and while doing so doesn’t jeopardize the care of our patients. This should be done by utilizing best practice models from around the nation as well as presenting the scientific literature on this subject.

Such a change will be a tall order for communities accustomed to seeing every ambulance running in an emergency mode. Once the community educational process is completed, response time standards can be implemented consistent with the scientific evidence regarding the time-critical nature of the small number of medical emergencies that may benefit from the few seconds to minutes that might be gained through a RLS response and transport.

For all other calls, response time standards would then be only a measure for customer service specialists and should either be significantly extended or could be done away with completely.

Emphasis on a standard of providing BLS within four minutes and ALS within eight minutes permeates the EMS and fire service industry, and is even codified in National Fire Protection Agency standards.12

In a 2010 article on response time in Best Practices in Emergency Services, author Jennifer Goodwin wrote, “One reason the concept of rapid response looms large for EMS is a misconception among the media and the general public that ambulance services are mainly transportation, while the real medical care starts at the hospital.”13

This is a haunting thought, as members of the EMS industry know well that care begins at the onset of recognition by the public, and that EMS is a dynamic member of systems of care. Much of the lay public isn’t aware of their personal responsibilities to initiate the care discussed above.

Many don’t understand that the care that’s coming by EMS is extending BLS and ALS services already on scene. Public education and evolving technology has primed emergency scenes for citizen intervention, giving us pause to reflect upon the response time requirements from the landmark work of resuscitation researcher Mickey Eisenberg, MD, PhD, at the inception of EMS systems of care.

1. Eisenberg MS, Bergner L, Hallstrom A. Cardiac resuscitation in the community. Importance of rapidprovision and implications for program planning. JAMA. 1979;241(18):1905—1907.