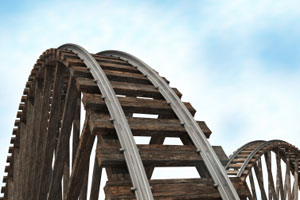 The steering was all over the place. The suspension felt like the axels were bolted directly to the frame. It didn’t matter what speed we were going, it was still like riding a roller coaster with no shocks or a buckboard with no springs. Every bump, jolt and shimmy elicited a moan from my patient.

I took a beating. He took a beating. Starting an IV was like playing Whack-A-Mole with a dart. It was embarrassing. It was unprofessional. It was shameful. Granted, it was a backup rig, but patient care shouldn’t be a lottery. And every truck should be up to a minimum standard or taken off the street.

Now, lest you think I’m a coddled, soft-shoe paramedic, let me remind you that I grew up in New York City. There I learned to drive, and drove a three-wheeled, pedal-driven delivery bike, as well as a delivery truck and taxi cab (yes it was a Checker!). And this was in the 70s, when New York was, well–if you’ve seen “The French Connection” or “Taxi Driver,” you know what I’m talking about. But this rig, well, it was beyond anything I’d yet experienced outside the third world. I’ll admit the command car I drove up a wadi to Santa Caterina Monastery in the Sinai in 1974 was a worse ride.

There’s a lot of talk about the importance of the street medic in EMS. We talk about the fact that the main purpose of our existence is to treat patients and transport them to the hospital. But deeds speak louder than words. When you see upper management who rarely, if ever, respond to emergencies driving brand new tricked out SUVs while you try to treat sick people in the back of a sled on wheels, you can’t help but wonder what the real priorities are.

If the men and women in the field are in fact and not just in word really the priority–because it is we who treat and transport the patients–then it is management that should sacrifice first. Management should ride in the older trucks or in their own personal vehicles until every street unit is up to minimal professional standards: a truck with a smooth ride where everything works; a truck that doesn’t reek of diesel smoke and with turbo that doesn’t scream like a banshee in rutting season. This truck starts every time and has heat and air conditioning. This truck doesn’t leak water on you every time it rains. This truck doesn’t shame you and abuse your patients. A good officer sacrifices their comfort for the good of the troops.

Years ago when I was a camp counselor, I took the four boys in my tent group on an overnight trip to a remote lean-to. After dinner, when the camp fire banked down to embers, we got ready to sleep. We discovered that one of the campers had forgotten to pack his sleeping bag. So of course, I gave him mine and spent the night by the fire trying to keep as warm as I could–the nights get mighty chilly in the Adirondacks at night, even in July. Other than nodding off on occasion, I didn’t get much sleep. But I was the counselor; I was the only adult, and so I was ultimately responsible for the fact that we were one sleeping bag short. So no matter how much it sucked, I really had no choice in the end, and I was the one destined to spend a sleepless night. And that’s the way it should be.