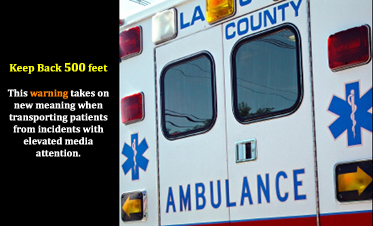 JEMS.com Editor_s Note: Just a month after”žA.J. Heightman, MPA, EMT-P, Editor-in-Chief, JEMS, wrote an article about patient privacy sparked by the difficult transport of a famous singer in”žLos Angeles, the singer was transported again. This new incident shows exceptional control by all the emergency agencies involved. Law enforcement clearly establishes a no-access zone, allowing the emergency crews to protect the privacy of their patient and work unimpeded by the press. These high-profile cases exhibit the type of pre-planning that should occur and be implemented with not just high-profiled patients but also high-profile events, such as special events, MCIs and structure fires, where the uninvolved public and the media can converge en masse and disrupt operations and the privacy of patients.”žClick here for a video of the newest transport.

Britney Spears was treated and transported by”žLos Angeles”žCity paramedics around 10:30 p.m. Thursday, Jan. 3,”žafter officers had found her under the influence of an unknown substance when they responded to a reported child custody dispute. Spears was involved in a stand-off with ex-husband Kevin Federline’s bodyguard, who had attempted to retrieve her two children Sean Preston, 2, and Jayden James, 1. Celebrity news websites USmagazine.com, CelebTV and TMZ.com reported that the drama began when Spears failed to hand her two children over as arranged under a court-ordered custody agreement with Federline. The ambulance arrived on scene shortly after, and the two children were turned over to Federline after police reviewed court documents.

Video footage and pictures of the incident shown on celebrity news Web sites showed a smiling Spears and paramedics attempting to shield her from the paparazzi that followed the ambulance to a nearby hospital.

View the swarm of paparazzi that LA City paramedics and firefighters had to contend with on scene, en route to the hospital and on arrival at the emergency department by checking out the”žvideo on the JEMS.com home page. Click on the following link and check out”ž”BRITNEY”žHOSPITALIZED!””ž(Click here to view video)“ž(Click here to view a second video)

Spears has sold more than 76 million records worldwide, and her 31 million albums sold in the U.S. make her the eighth best-selling female artist in U.S. music history. We live in the YouTube and TMZ.com generation with paparazzi hungry for celebrity footage. Therefore,”žEMS agencies should pre-plan ways to protect the privacy of all patients, not just celebrities, while the patients are in the patient compartment of the ambulance. Photographers will use any access point (front, rear and side windows and patient compartment doors) to get images that will reap them a significant pay check for the captured images.

My father, a 35-year veteran ambulance officer with the”žScranton (Pa.) Fire Department, installed inexpensive, rolled-up vinyl “curtains” above each patient compartment window and secured in the rolled up position by two small snap-on straps. (Vinyl was used because it was easier than cloth to wipe down and keep clean.)”žWhen the need for privacy arose, such as during the delivery of a baby in the ambulance patient compartment while en route to a hospital, his crews simply unsnapped the rolled-up vinyl curtains over the rear doors and they would fall into place and obstruct the view of anyone standing outside or following the ambulance to the hospital.

Do your ambulances have push-button privacy windows?”žCast your vote in the poll at the bottom right-hand side of the”žJEMS.com homepage.