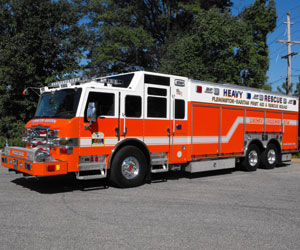 Researching information for articles on fire and EMS organizations has not only been a job, but a hobby for me for the past 13 years. Although most of my columns have highlighted fire department apparatus, I recently began to expand my horizons into the many superb EMS rescue squads and their unique apparatus and means of operation.

One of the more proactive EMS squads is the Flemington-Raritan First Aid and Rescue Squad (the Squad), located in Hunterdon County, N.J. The Squad is a combination volunteer and career EMS and rescue services provider serving Flemington Borough, Raritan Township and parts of Readington and Delaware Townships.

The Squad has always operated a diverse fleet to handle its response district. However, back in 2005, it took this process a step further, forming a committee to start writing specs and to develop a basic design for a new heavy-rescue truck.

New Design, New Capabilities
The committee consisted of 10 members, including chiefs, rescue officers and members-at-large–both young and older. “We wanted to get everyone’s input into the design,” says Gary Breuer, the Squad’s rescue training officer. “The new vehicle was replacing a 35-year-old Ford/Hamerly vehicle.” The Squad also operates a 1992 Mack/E-One, which will continue to be used to carry additional equipment for responses.

“We sent out the specs to nine apparatus builders; six came back with proposals and two actually bid,” Breuer says. “Pierce was eventually chosen for the build. The new rig brought major changes for us, in a good way. It enables us to respond first-out to all fires and technical rescue alarms. We have everything we need to get started on all rescue and fire operations.” The vehicle also sports a full cascade system to refill SCBA.

The new rig features a walk-around rescue body, 10-person cab with eight seats and floor-to-ceiling EMS cabinets. “We gained a lot more compartment space, and the extra-large cab is a lot quieter than our older Mack,” Breuer says. “Our members don’t have to wear headsets anymore.”

Compartment space was integral to the vehicle design. Breuer notes that the committee set up the body compartments to give the Squad more flexibility in response capability. “We have more than enough room to carry rope and confined space equipment in the rooftop coffin compartments,” Breuer says. “We use the extended front bumper and the driver’s side of the vehicle to carry cutting tools, with rams on the officer’s side. This gives us six pre-connected tools. We also have a 185-cfm compressor that powers our pneumatic tools, a Stanley hydraulic tool system, submersible pumps, jack hammers and the normal truck company and heavy-rescue tools. We designed all of the compartments to be user-friendly.”

The vehicle is built on Pierce’s Velocity chassis with TAK-4 suspension. “It’s like night and day over anything else we have operated,” Breuer says. “The ride is awesome. The maneuverability has improved with a better turning radius as well.”

Putting It Together
Members of the Squad visited the Pierce factory three times–pre-build, mid-build and for the final inspection. The trips were all paid for by the Squad. “The experience at the factory was unbelievable,” Breuer says. “The Pierce engineers were great to work with. They would never say “˜no’ to any of our ideas. Before we went out to the factory, we laid out on tables all of the equipment we would be carrying on the vehicle, and then took photos. We planned out where we wanted everything stored. We worked to within 95% of where we wanted to be with equipment storage.”

At the factory, the Squad discovered some minor issues with ladder storage on the truck, but the engineers fabricated changes on the spot to make it work. “There were also some minor problems with the light towers, but Pierce and Will-Burt worked that out for us,” Breuer says.

Repairs and maintenance are performed by the local dealer, Fire and Safety. “They have been working hand in hand with us during the entire process,” Breuer says. “The only time the truck has been out of service has been for basic maintenance.”

Working Together
The Squad has always had a strong rescue component in the local area, and has built excellent working relationships with other departments and agencies to coordinate response to rescues.

“The rescue is staffed by all volunteers, most of who are also members of the local fire companies,” Breuer says. “We have two staffed ambulances Monday through Friday during the daytime hours and one ambulance 24/7 with one crew.”

The Squad responds with two ambulances and the heavy-rescue for all structure fires; technical rescues require a special call. “We have a county box-alarm system that dispatches what’s needed for each alarm,” Breuer says. “We really work well with all of the surrounding towns. There are no turf problems. Everyone in the area sets up their vehicles and tools to match ours. Training takes place with all of the mutual aid companies on a regular basis.”

The Squad is funded partially by the township and also by donations from surrounding municipalities. “We also run an annual fund drive, and we bill for EMS runs,” Breuer says. That money is allotted for staffing and capital improvements. The Squad pays for fuel and maintenance.

A Final Word
The Flemington-Raritan First Aid and Rescue Squad is an integral part of the technical rescue response in the four communities it services. Doing this with volunteers is never easy, but the Squad accomplishes it through professional response, maintaining a positive working relationship with mutual-aid companies, and speccing cost-effective, well-designed apparatus built for the communities’ needs.