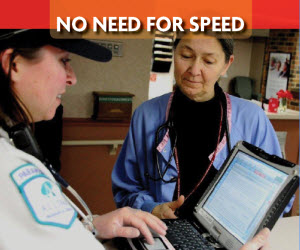 The following scenario will likely sound familiar. You’re dispatched to respond lights and siren to a nursing home. On arrival, you find a resident who isn’t in need of emergent transport. A cluster of facility residents appear confused and anxious about the arrival of EMS, and the faces of nursing staff convey regret about the commotion caused by an unnecessary lights-and-siren arrival.

You assess the patient, and your initial clinical instincts about the non-urgency of the situation are confirmed. You begin to silently question the dispatch priority for this particular call. Was running “hot” through mid-day traffic really warranted? Many times, the answer is no.

It’s well established that aggressive lights-and-siren response by emergency vehicles puts providers, patients and the public at increased risk of harm from motor vehicle crashes, and data suggest these risks are often incurred with little or no real clinical benefit to the patient.1—5 Between 1990—2009, an estimated 85,000 motor vehicle crashes involving ambulances occurred in the U.S., with 590 of those involving fatalities.6

Those figures amount to an average of 11 ambulance accidents per day and one ambulance-related fatality every other week. Most EMS agencies make a genuine effort to reduce the risks by mandating education and training on the safe operation of emergency vehicles during response and transport. But the other part of effectively reducing risk is minimizing the frequency of unwarranted lights-and-siren response without compromising patient care.

Augmenting Priority Dispatch Systems
Validated 9-1-1 medical priority dispatch systems in use across the country have been implemented to improve the appropriateness and efficiency of dispatched services–getting the right EMS resources to the right people within the right time frame. But these algorithms are mostly designed to evaluate EMS needs based on information provided by 9-1-1 callers with no medical training, many of whom will access the system only once in their lifetimes. Consequently, dispatchers are trained to err on the side of caution, assuming the situation is urgent when information provided by the caller is sufficiently vague or when the caller is no longer in the presence of the patient.

According to 2010 data submitted to the National Emergency Medical Services Information System (NEMSIS), nearly one-third of EMS call volume is attributable to healthcare facilities, including hospitals, clinics and nursing homes.7 Callers from these entities represent a different set of EMS summoners given their higher propensity for accessing 9-1-1 repeatedly and some degree of medical training. But many EMS responders will attest that unnecessary lights-and-siren responses to healthcare facilities, such as the situation described above, still occur. EMS agencies should be committed to exploring strategies to further refine dispatch prioritization at the local level.

A Skilled Facility Response Program
Allina Health EMS is the EMS provider of Allina Health, a not-for-profit system of healthcare services providing care throughout Minnesota. The ambulance service area covers 1,200 square miles in 100 communities in the Minneapolis and St. Paul metro area and includes about one million residents.

Allina Health EMS responds to more than 72,000 calls annually, with approximately 50 nursing homes accounting for 7,000 of those calls. Lights-and-siren responses to these facilities frequently distress residents and needlessly expose people on the street to excess risk when emergent response is unwarranted.

Over the years, Allina Health EMS paramedics reported hearing nursing home staff express hesitation and uncertainty about specifically requesting routine response from dispatchers, even in circumstances for which it was clinically appropriate and more desirable. There was clearly an opportunity to provide nurses and dispatchers with more formalized guidance and education regarding when and how that could be done safely. To systematically address unnecessary lights-and-siren response to these facilities, a process improvement initiative called the Skilled Facility Ambulance Response Program (SFARP) was launched by Allina Health in 2007.

SFARP focuses on increasing awareness among nursing home staff about the risks associated with lights-and-siren response and provides them with a standardized protocol that promotes the most appropriate use of ambulance services. Through the program, nursing home caregivers revisit clinical assessment skills and are introduced to a brief flow chart algorithm that assists them in determining and requesting the type of ambulance response that is most appropriate–emergent, routine or scheduled response.
For routine and scheduled requests, staff members use a non-9-1-1 contact number that bypasses the local public safety answering point (PSAP) and connects them directly to the ambulance dispatcher. Nursing home caregivers are asked to use such predetermined trigger phrases as, “I am using the flowchart,” and “I would like a(n) emergency/routine/scheduled ambulance response.” These trigger phrases immediately alert the Allina Health EMS dispatcher that the call is coming from a participating SFARP nursing home.
As part of the program, Allina Health dispatchers are trained to accept and trust the assessment provided by the caller, who’s typically a nurse, and dispatch an ambulance based on the priority requested. It’s emphasized to all involved that the response level may be upgraded or downgraded at any time. Colorful point-of-care aids displaying the protocol flow chart, trigger phrases and dispatch contact number are laminated and posted at nursing stations in participating facilities.

Education & Rollout
SFARP training for nursing home staff consists of a 30-minute educational session led by the program director. Sessions are conducted at the nursing homes and are intended to be incorporated as part of an in-service or regular staff meeting. Attendance by all direct caregivers is strongly encouraged, but whether the training is mandatory for staff is at the discretion of each facility.

In 2007, the program director approached administrators of two nursing homes in the service area with large annual call volumes and presented the concept and objectives of the program. The nursing home administrators enthusiastically agreed to participate in a pilot study and identified site champions.

The pilot lasted approximately three months during which representatives from the nursing homes and Allina Health EMS met monthly to review audio recordings of all calls (20—25 per month) and quality assure the level of response. Minor modifications were made to the preliminary protocol based on informal feedback and individual call reviews. Initial results and reactions were overwhelmingly positive, and the program was expanded to seven additional nursing homes with volumes of greater than 50 calls per year.

Benefits & Successes
The two pilot SFARP nursing homes have seen a decline in the proportion of lights-and-siren responses–from 68% of calls during a 12-month period prior to implementation to 59% of calls during a 12-month period after implementation. The reduction in lights-and-siren responses has undoubtedly improved safety for providers and the community, and there’s nothing anecdotally to suggest that the program has compromised care.

It’s important to recognize that the intention isn’t to trump the broader evidence-based algorithms used by dispatchers, and that nursing home staff appreciate the type of situation this program was designed to address. If the circumstances are at all questionable, nursing home staff should call 9-1-1. The protocol simply provides a mechanism for requesting routine response when that clearly makes the most sense given the assessment of nursing staff and their familiarity with the behaviors and needs of the resident.

The protocol has been well received by nursing home caregivers who immediately saw benefits for both residents and themselves. Mary Sheets, RN, at Golden Living Center in Roseville, Minn., explains, “When I verbalize that I am using the flowchart, the dispatcher seems to listen better and will send the ambulance as I request it. Before the flowchart, I would request a routine response, but they still responded lights and siren with the fire department and police. [It was] very frustrating for everyone.”

Nursing home care givers who are non-native English speakers have noted they welcome the simplicity the protocol provides when trying to communicate to dispatchers that there’s a non-urgent need for EMS. Paramedics and dispatchers are also pleased with the new process. “When I’m informed on the way to a call that nursing home staff is using the flow chart, I have more confidence in the response level and in the level of patient acuity I expect to find,” says Allina Health EMS paramedic John O’Brien.

Implementing the program has also required few resources. It has required only instructor time, protocol and curriculum development work, and modest costs related to the preparation of educational materials and point-of-care reminders.

Summary
Confirmation by a nursing home resident’s physician is frequently required prior to transport from the facility to a hospital. So in cases for which the need to transport isn’t truly urgent but the assigned priority is lights and siren, EMS often rush to the scene only to wait while physician confirmation is obtained.

With the protocol in place, routine response for non-urgent transport needs means that confirmation from the physician is often already being sought or has been received by the time the ambulance arrives. This theoretically places the crew “back in service” sooner.
Reducing unnecessary lights-and-siren ambulance response in communities employing this type of response model can improve use of EMS resources. For example, some community-level EMS protocols in the Allina Health EMS service area have local police and fire dispatched to all medical 9-1-1 calls. In non-emergent situations for which the protocol is now used, police and fire are no longer dispatched in situations they would previously have been dispatched concurrent with an unnecessary emergent response.

The Allina Health Skilled Facility Ambulance Response Program provides an example of how EMS agencies can partner successfully with skilled-nursing facilities to promote the most appropriate use of ambulance services and effectively reduce the frequency of unnecessary emergent response. Limiting the use of lights-and-siren arrival to only those situations for which it’s truly warranted improves safety and benefits nursing home residents by alleviating anxiety and disruption. JEMS

Lori L. Boland, MPH, is with the Center for Healthcare Innovation at Allina Health in Minneapolis. She can be reached at lori.boland@allina.com.

This article originally appeared in July 2012 JEMS as “No Need for Speed: Improving accuracy of nursing home response-level requests.”